Monday evening we had a really hard rain storm and three of our windows were leaking in the living room. We used towels to soak up the drips but should have someone fix it before we get hit with hurricanes. Since there's one brewing in the Atlantic.

After the storm I saw our little alligator near the house just under the window. He's little and won't bother anyone. When you go near it or make noise it dives under water. (Click on the photo to enlarge).  You can see his whole body. I saw a second one in the canal. He tried to get into the retention pond but a big blue heron stopped him. As I said, both alligators dive under water, no threat yet. 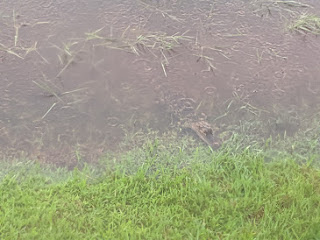 This is a picture of a rainbow I took on the other side of the road. It went clear across the sky but I couldn't get a full view. Our day started early, for me it was VERY early 6:00 and it was dark. We had the car already packed except for the stuff we were using in the morning. It didn't take long to get out and go to McDonalds for a bite to eat then on the road at 7:07.

It took one hour to get to the Florida Turnpike and heading to 75. We had  road work  in one area, but otherwise the traffic was good. There were a lot of trucks but that's normal. We pick the middle lane and set the cruise and let everyone else go around us.  We made it thru Atlanta in 17 minutes, just kept on 75, no wrecks. It was about 3:30 which was too early to stop in  Marietta, GA  so we continued on toward Chattanooga.  We found a motel Holiday Inn Express at East Ridge, TN just over the GA border. We'll go around Chattanooga in the morning and make our way to Shepherdsville, KY tomorrow night. There's a few things we want to do there.

While at the hotel, we found out something very interesting. The room was one price BUT if you order a room online it was about $40 cheaper. That may be a game changer if you're interested in a room. We ordered the room while sitting in the lobby. The desk clerk told us it's all about taxes. We saved some money. He also told us about a Greek/Italian restaurant across the street. We're so glad we went. We both liked what we got and I forgot to take a picture. I had a Greek fish with veggies and Jim had veal with spaghetti. If you're in the area the name is Portofino's. Great people and food.

We were in and out of rain showers but nothing drastic. We did see this 50's Ford on a trailer that looked cool following it. 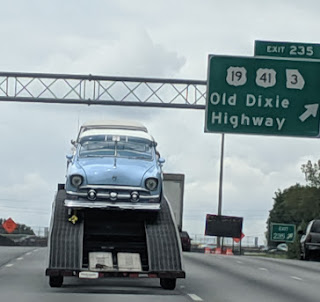