I'm home safe from trip 5 everything that happened was in four days, three states and 791 miles with 2 visitations. It was THE best weekend and Well worth the trip. I'm so proud of myself for doing the whole trip without getting turned around or lost and I did it ALONE. The GPS did a fantastic job and so did Rick in teaching me more about reading the thing. I could never figure it out without problems.

Sunday was church was my nephew, Dave and wife Tina. We were up and on the way by 8am. There was a potluck planned  and Tina brought a taco casserole and baked it at the church.  It was all over by 1:00 so I left to go to Indy. (Click on the pictures to enlarge).  Photos of the sanctuary and Dave. 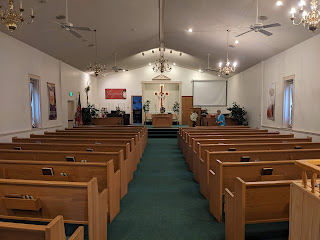 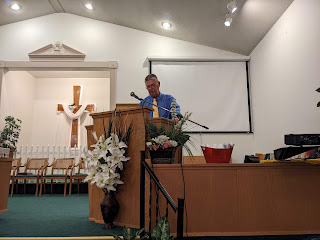 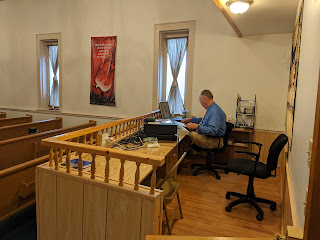 The trip to Indy was to see a GBM friend, Grace who is from zoom meetings.  The trip  took  shorter time then the GPS said it would so I beat her to the house. It's about 3 1/2 hours. Traffic was very light. I love Sunday driving, We discussed all we've been through and had a great dinner then she invited a neighbor over that just lost her hubby. We had a great time.   During the night we had a storm which woke us both up. It was gone by the time she had to go to work and I left about half hour after she did. I was trying to miss most of the traffic and I did. I got home 11:30, which was a four hour drive.  No problems. I unpacked and got some of the things ready to go for next weekends trip.
Tuesday I worked at hospice. They have a big project with 600 invitations going out, which had to be copied and folded, put in envelopes and labeled. I worked all day on it and almost got it done. The rest won't take long. I thought I'd work Thursday but really wanted to be with my sister for her 70th birthday.
Thursday morning I headed to my sisters. It's a one and half hour trip to Missouri. The traffic wasn't bad at all. I got there mid afternoon and we went shopping to Total Wine as the first place. There were a couple other places and she took me to Hardee's for the great cinnamon roll. I'm glad I can get one anytime at Hardee's close to where I live.
It was sis's birthday and Jim's was today too. They were two years apart and when ever we could we'd celebrate with both of them. We went to a bar and grill and had a great dinner thinking of Jim the whole time. He would have got his steak and watch the Cardinals game. (which was on TV as we ate).  We really miss Jim, but life continues. 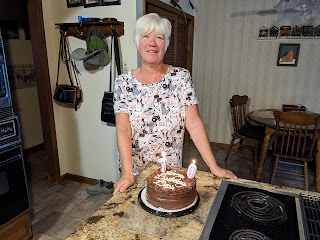 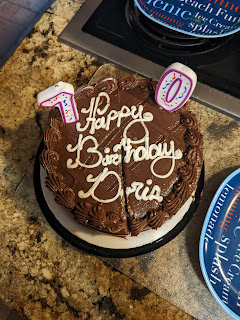 Friday Doris and I went to a neat shop with specialty gifts which I bought my daughter in law something for Christmas. Now I've started gift buying.
Saturday we headed to Hannibal, MO. We try to get to the Traders Store downtown to buy Indian articles. I love their rings and T-Shirts. Sis wanted some moccasins. We love all the stuff they have and we stayed about an hour. We also have a favorite place to eat and it was packed. The weather was perfect and everyone was sitting outside. We also went to the Mississippi River bank and found the American Symphony cruise line was stopped and letting the people off to go to the Mark Twain Cave. It has 91 suites on board. The town was bustling with people and that's why there were more then we've seen before. 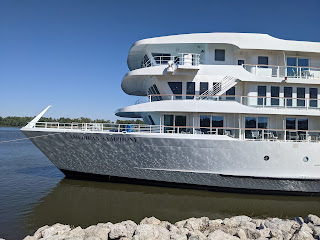 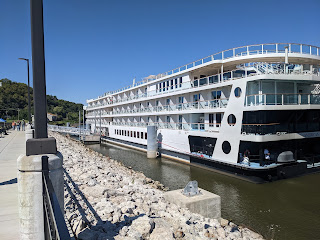 We love this place to eat in Hannibal. They even had a guitar player today. 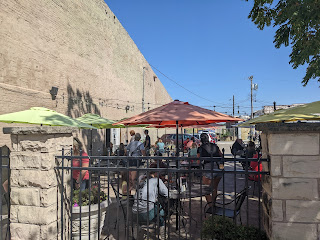 I ordered a Shrimp Poorboy sandwich. It had the biggest shrimp I've seen in awhile. 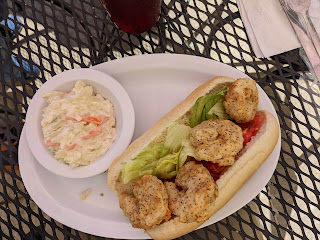 This little boat goes out daily in three different excursions taking guests up and down the Mississippi. 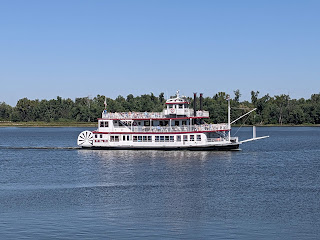 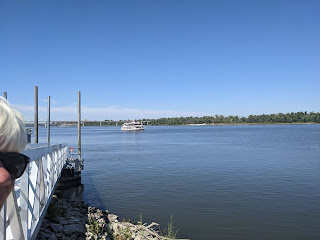 My sister Doris watching the boats on the river front. 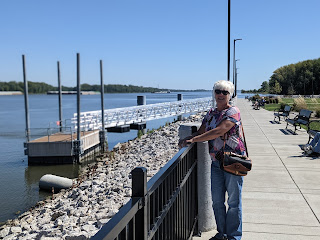 We came home and visited with a neighbor then had a bon fire for dinner tonight.  We had brats and hot dogs then S'mores for dessert. A great day and we're both tired.  We had a wonderful time this week but more to come.

Glad you're keeping busy. Looks like a fun trip. Chey

So glad you had a good week, Dee.