Back Home - RV'er Visit - Packing for a BIG Trip

Sunday I didn't do anything but relax. We had a great day with temps in the 70's. The mornings are chilly but just a heavy jacket or sweater is great. The sun is warm, it's the wind that gets ya. While we were sitting outside we saw a doe and her baby by the pond. (Click on the photos to enlarge). 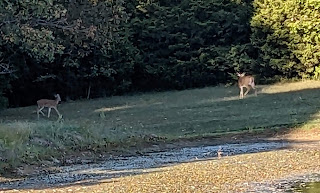 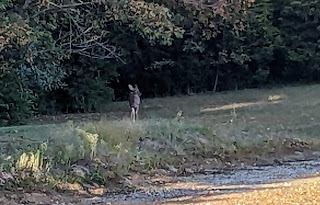 We watched the hurricane Ian that's gaining strength in the  Caymen Islands. At this time it's a Cat 2 but once past Cuba it's expected to be Cat 4 before landfall in Tampa area. It can still wiggle a bit, but it's a big one. I hope it's not as much damage as Catrina, or Charley in 2004.

I was playing with Carley and got a picture. 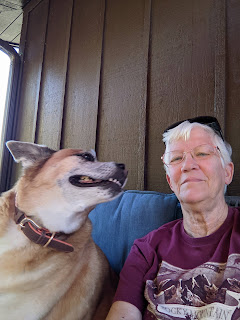 Monday we watched a movie before I headed back home. It was great traffic because the GPS knew there was a wreck on I 70 and took me I 64 all the way home. I'm not real sure how that works, but it sure saved me time on the road. I was home in an hour and 10 min.  It took awhile to unload the car. I threw everything in the washer and put other stuff away and sat down to watch the storm chasers going to Florida.

Tuesday I worked at hospice for just a few hours then home after getting a few groceries. I didn't do a lot all afternoon except watch the storm. There's so many of my friends in Florida and I'm hoping they'll all stay safe. By the end of the day the hurricane is predicted to go over our house we had in Auburndale. It's now a Cat 4 at this time. I'd be petrified staying there alone if I was still in Florida.

I finally got the puzzle in a frame. It looks great. Rick (son) got this one for me for Christmas. I love it. 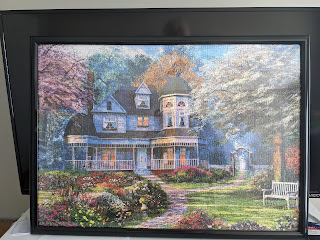 Wednesday I met with Hank and Selene, friends from NC that are now fulltime in the RV. They've been camp working in Michigan and now headed to Branson so we went to a restaurant at the half way point from their campground. 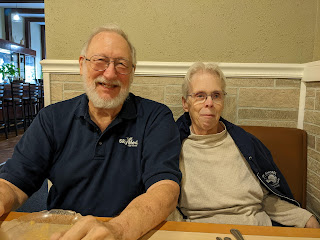 After we had a great lunch at Old 50 restaurant in Carlyle we headed to the Carlyle lake. I've wanted to see that lake since we lived here, but never had a reason to go and it's 45 minutes from O'Fallon. We aren't lake or fishing people so never checked it out. It's a huge man made lake and it's very pretty. It's also very shallow so canoes and sailboats are what you see mostly. 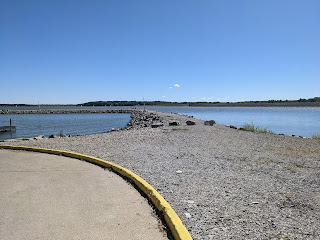 Jim wouldn't like this campground, it has tons of trees to maneuver around. It's pretty area though if you want to bring in little or big RV's. 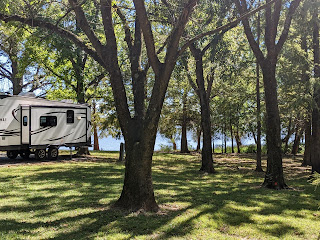 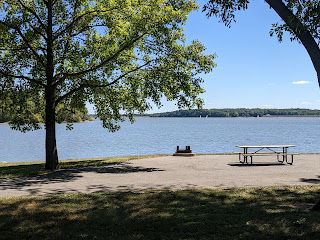 I got back home in time for the hurricane IAN coming to shore in Cayo Costa,  FL. I watched the storm chasers and Ryan Y'all on youtube the rest of the night. I had a lot of friends I were worried about in the storm both on west coast of Florida and where I lived in the middle of the state. I finally heard from everyone by Friday morning and they're all ok. The property might not be okay. but physically all is well.
Friday I did nothing but watch the youtube channel on hurricane IAN. It was out of Florida and back into South Carolina. It was a Cat 1 so not as bad, but still lots of flooding. We went thru Irma and this one was so much worse. It's going to take a long time to rebuild like in any big hurricane. My heart goes out to everyone.

I never thought about how many people we knew that moved to Florida until this week. All ok.