Life Can Take a Turn Fast!

I really don't know where to start. I'm basically using the blog for reference and when our lives turned upside down. Don't always take what you think is "OLD AGE" for what it is. Seek help and get verifications that your health is ok.

The story starts basically in November 2020. My sister noticed Jim was a little off on some of the things he was saying. Getting words mixed up or not following the topic we were discussing. It was so subtle we figured it was just something as you get older will happen, we all do it. I noticed later that Jim was taking longer naps and more often, maybe about February. I knew my rock wasn't the stable guy I once knew and life wasn't ever going to be the same in May 2021. Something was wrong. He came in from his daily walk slurring and didn't feel right. He sat down and rested then seemed fine. We had planned on going to the grandkids high school and college graduation. We would be traveling 3 days instead of the 2 that we normally do. Jim wasn't up to par, no pain, nothing you could put your finger on, but something was way off beat, on the way he walked and talked. Basically a slur that wasn't normally noticed. The day before we left he wanted to see our doctor. He noticed a droop in the mouth and couldn't talk like normal but said it was up to us to go on the trip and he made a neurology appointment for the week we got back. We decided since the doctor wasn't all upset about it, we took off on Saturday morning. Sunday there was a bit more slurring but nothing to make us stop and think about it. Monday we arrived at Frank's, our older son. They noticed something was wrong right away.

Tuesday was our turnaround day. We went to see friends an hour away. The longer the day went the worse Jim got.  He was slurring and slow walking. When we got back to our sons, it was too much to ignore so we took him to the nearest hospital. They admitted him immediately. He went to Barnes Hospital in St. Louis a few hours later. A CSCAN and MRI showed a mass. They weren't sure just a mass or if a stroke was involved with it. Another CSCAN and MRI was done to see if there was any change 24 hours later. They left him go back to our sons on the 28th for the holiday weekend. A team of doctors spent time to figure out what was going on between the two MRI's.  It was a wait to see what was next. The biopsy they wanted to do was too risky, too many blood vessels and too high of risk to do a needle. The final thoughts were a full open surgery into the brain and pick a piece off the mass. (click the photo to enlarge).  There's a circle where the mass is located. 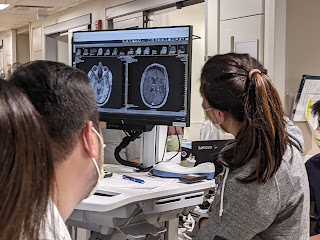 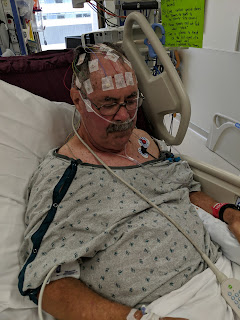 He went to the graduating party in the city park and sat and watched everyone  but couldn't talk well. He did well for the long day but very tired by evening. He slept most the evening and the rest of the night.

They decided to do a biopsy on June 2. It took two and half hours. They aren't sure what kind of cancer but it's stage 3/4 cancer. Glioma was the first thought. Now we wait for the biopsy to give us an idea  what is next. Jim was in ICU for a couple days and moved to regular room on June 4. They will have PT work with him before they let him out of hospital. 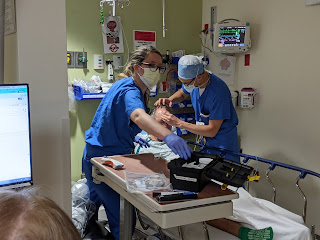 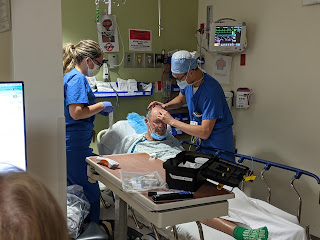 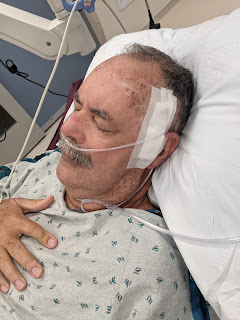 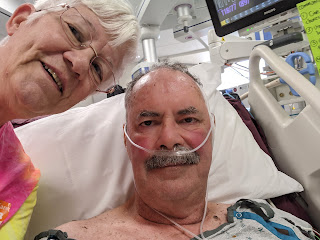 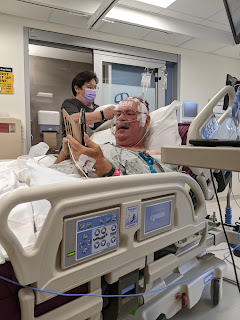 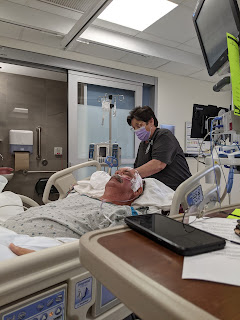 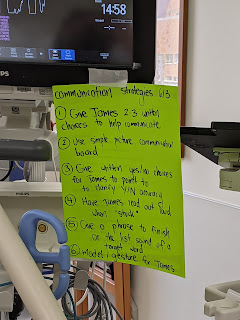 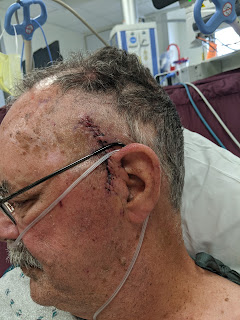 Right now he's still in the hospital. We're waiting to meet up with the doctor on the biopsy.  My next post will tell what kind the mass is for sure. I know life isn't going to be the same, but no one can guess how long he'll be with us.

In one week I got an apartment near our son, put the house up for sale in Florida, going down to Florida with sis and sort for the movers for June 17, flying back to O'Fallon on 19th, Movers should be here in time to sign for the apartment on June 21st,  so no storage. All medical appointments are cancelled in Florida. Things are falling in place.

Oh my gosh Dee! I'm so sorry to hear about Jim's issue. Will keep you both in our prayers.

I am so sorry to read this. Sending prayers and hugs to all of you.

I hate hearing this but so glad you are both near family. You will need their support and love during these difficult days.

God bless you both. We had to do something similar last fall and that's how we ended up in Tampa! We actually went to get strawberry sundaes at Parkland after I saw that you wrote about it on your blog! Will be praying for you both. Ann M

Oh my gosh Dee!! SO so sorry to hear all this. Thinking of you and Jim!!

Dee, so sorry to hear this news. Sending good thoughts and prayers to you and Jim..

Dee, Judy & I are so sorry to hear this! Very glad you are near family. You both are in our thoughts and prayers.

Dee, so so sorry to hear this. I will be praying very hard for Jim & you. Thank God you are near your family. Please keep us informed. Stay strong and keep your faith as I know you will. Love you 🙏❤️

Susan and I are both praying for you guys.

So sorry to hear this Dee. Thinking of you both.

Hey there Jim & Dee,
You both will be in my prayers as well as your family and the medical team. Safe travels as you go back and forth getting moved.

I'm so sorry to hear this. Wishing you both the best and a good outcome.

Keeping you both in our thoughts and prayers. Glad you're close to family.

We are both keeping Jim, you, and all of your family in our thoughts and prayers. Thankfully you are close to family. Good luck with the move, and please stay safe.

We are so sorry to hear this. Prayers sending your way.

Oh Dee, I am so very sorry to hear all of this!! Please know Jim and you will be in our prayers. I am glad you will be with family. They will be a huge help and support. 🙏🙏❤️❤️

So sorry, hope all works out well.

Bill and I are so sorry to hear this. We are glad you are near family and will keep you both in our thoughts and prayers!

Yes, like you said, "Life can change in a moment". I am so glad that you are with your family, and praying that everything will be great soon. Hugs, Penny

Dee, read your post this morning on my phone as it was a travel day. Karen and I were thinking of you and your family while on the drive and this evening. Sorry to hear the news. We are praying for you and Jim as well. I'll be asking others in my family to do the same.

So sorry to hear this. Hope the results come back good. Glad that you are able to be near one of the children. Prayers for both of you.

I knew Jim at Progress Energy (as his cubicle was very close by to me) and it had been years since I’d visited his Tumbleweed blog. I was going to let him know that I had retired myself very recently (although with a different organization than Progress / Duke Energy) and see if he was still keeping up with his St Louis Cardinals ball team . I was stunned to see the information about his health condition. I pray he has a speedy recovery.

Dee, I'm so sorry to hear this. It just broke my heart for both of you.

DEE Don and I are so sorry fo hear this about Jim. Praying for Jim and you.

While I've never met the two of you, as fellow RVer's our hearts go out to you and Jim. You are in our prayers.

OMG, Dee. I'm just reading this a month or so late as I'm not posting or reading very often these days. I certainly hope things are going well for Jim and you; I will keep you in my thoughts and send positive energy your way.