Watching storms and flooding has been this weeks activity. The floods in Kentucky with the storm chasers helping out was amazing. It's great seeing so many people coming together to help each other.

Monday I took our grandson Kendall to lunch at a local restaurant. I called it "bonding" time. I seldom see him, he's out doing something with friends. He goes back to college next week.

Tuesday I went with Ruth to see the Minions. It wasn't nearly as good as the last ones, but does have some very funny lines. There were quite a few people in the theatre. The next two movies I want to see is NOPE and AVATAR. They both had good trailers.
Wednesday was our son Frank and wife Angie's anniversary. I can't believe it's been 26 years already. I feel older with every passing birthday and anniversary with the kids.
Friday I decided to start checking what I really don't need that I brought from Florida. It's a year, so a check of what I haven't touched was in order. I'm selling the one night stand. It's very well built and heavy. I put it on Market place and right away I had someone interested. But it was really strange on what they asking to be sure I wasn't a spammer they sent a google number, which I sent back to them. He said that wasn't right and never heard from him again. I can't figure out what's going on so I took the ad down and letting Angie sell it. She's super good at it. Frank is going to pick it up and take to his place so I don't have people coming here. So many scammers doing different things to get your ID and money.
Friday we had tickets to the World of outlaws race in Pevley,  MO. It was a long time since I've been to one of these races. They're hard to find and it's mostly in the Midwest.  We left at 5:20 after I picked up Frank and got home at 3:00am. Six hours of racing at a dirt track makes it interesting. It was so fun. Here's a video of what happened. There were a lot of spins, wrecks, roll overs, and everyone walked away. They had Midgets and my favorite World of Outlaws Winged Sprints. I grew up watching those races and it was so much fun. The reason it was long hours they had qualifying, and smaller races to see who would race in the feature of 55 laps . I hope to go again next year, There were 31,000 people there. (Click on photos to enlarge).
Dee & Frank
This picture was in the stands and there was a gal standing behind us. I used Pixio to take her out so we may not be as clear as normal. I love taking pictures and changing them. 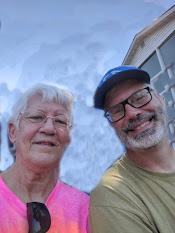 This is the World out of laws Winged Sprints. I love these cars. 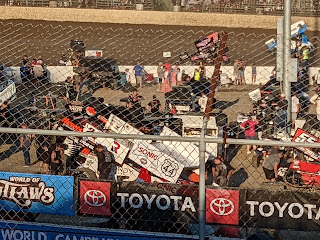 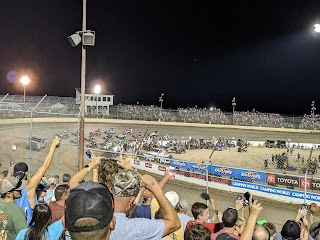 This was taken when the race started with people having the flashlights on the phones. It's really pretty. 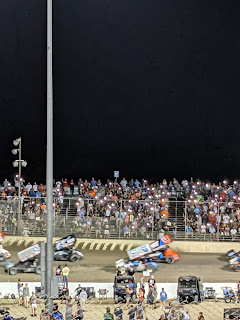 This is just one section of parking with cars ready to leave. An hour and half later we were out of the parking area. 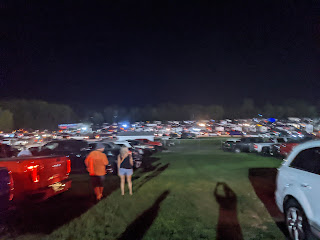 I didn't get up till 11am on Sunday morning. The day is already mostly gone, which is a good thing. I'm packing today for the third trip of the summer starting Tuesday. Stay tuned.