I'm finding the really high heat doesn't last as long in this area like it is in Florida, BUT in Florida it DOES NOT go over 100 like it does here. I thought I'd just throw that out.

I started a "tiny" puzzle in May and finally finished it. The pieces are very little and the puzzle is 1000 pieces. There's two that are missing,  for some reason one  doesn't fit this puzzle it's not the right colors. I have no idea how that happened. I'm not sure if I'll put it in the box for thrift store or just throw it away. I'm still trying to decide. I wouldn't mind doing another one of those, not many made, but sure is challenging.  (Click on photos to enlarge). 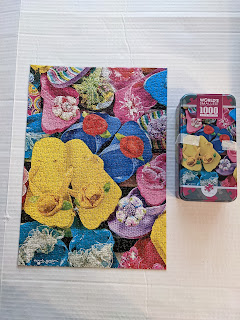 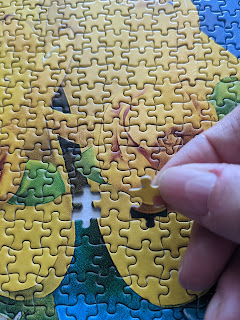 I bought a hummingbird feeder and put it out. I've seen a hummingbird come by a few times, as if looking for a feeder in the community. Sure enough a few hours later it came around. It's been with me all week every few minutes it will stop for a drink. I now have a pet, one that doesn't need walking or litter changed. I won't have it in the winter, but that's ok, it will be back in the spring. 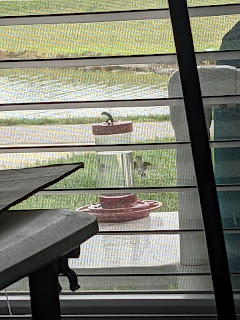 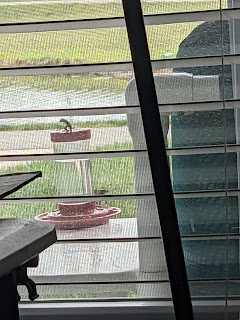 We had a powerful storm on Monday with a series of storms actually. They were big ones in a row and flash flooding with at least 8 inches of rain in a five hour period was in our area. People were telling me lightening wasn't important nothing was hit. I know lightening can start fires and I was certain with the strikes around our buildings would be hitting one of the buildings. I was awake the entire night. It sounded like a bullwhip snapping with every flash and it was so often there wasn't thunder to follow. It was a scary night and without Jim I was very nervous. I finally fell asleep about 6am and slept 3 hours. I hope that's not very often. There was a lot of flooding in the area, but no deaths that I heard about.

Wednesday I went to the kids for brat dinner. It was so good. It's always good to catch up with the family and the grandson is home for the summer.

Thursday I volunteered at hospice. They had a lot for me to do and one was organizing a drawer of all kinds of greeting cards. That's going to take some time, but I love doing that sort of thing.  I do copies, computer things,  prepare mail etc. It's really neat being with the ladies. I stayed for a meeting at 2:00 and when it was over it was pouring rain so I stayed and just talked to the gals till 4:00.

I'm finished with the crochet snowmen order. I'll make a couple more for the craft fair in October. They're so cute. The little one is melting and has the lights tangled. I tried to get more "personable" with it. 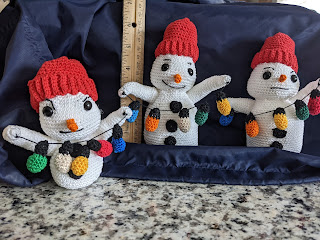 Friday I went with Ruth to the O'Fallon band rehearsal. They're preparing for the football half time shows. We were both band chaperones with our kids and we wanted to see if there were changes on how they do the shows. Lots of changes. I can't put in pictures till I'm allowed. It has something to do with the "lawyers".  Go figure.  I did get a picture of the whole band. It's huge. We had 220 in the band while the kids were in it I think there's more this year. This is my first try at panorama.

Yes, I heard about storms up there. We are so dry here. However, this morning I am sitting on the porch with my coffee as a light rain is falling. As a bonus the hummingbirds are at the feeders. I guess I have additional pets too. And they don't poo on the porch like the ducks. Phyllis