I have to talk about technology. Rick and his girlfriend Tammy have a lot of technical things in the house. The lights are on timers. Alexa does about everything. They tell Alexia to turn on or off lights in certain rooms. Tammy even has a kitchen faucet that you touch and it turns on and off. I love it you can get really spoiled in their homes. I can't wait how much more technology will be in the next 10 years.

This has been a very quiet week. I still have 4 more snowmen to crochet so most of my days were crocheting. I caught up on a week's worth of TV shows that were recorded.

My sister said there was a house in her park in Okeechobee that is open to rent. The owner was selling and if she could talk him into renting I could put in for it. I called the kids to get approval on a move back to Florida. I told sis to go for it. The owner had a couple people there looking at it so I waited to see if they were buying it. He called me back in the evening and said the guy didn't buy that one but another one in the park so it was up for grabs.

We made a verbal ok on what to send for a down payment to hold it. I told him I can't get out of my lease till June. He thought he'd rent it the six months that it would take to have it open by June. No problem. I had pictures he sent and it's totally furnished. It's the typical place you move into not needing anything but your clothes. As most of you readers know I went thru a lot to get what I have for the apartment. I really don't want to get rid of it. That was number one gut feeling that maybe it wasn't a good idea to move. The "what ifs" started. What if I need to move back with the kids. I need something to live with in another apartment.

The next day all that we discussed was changed. He wanted another months rent up front, normal, but something about it just didn't seem right. What if later in the six months he wanted more to cover the rent. I had a funny "gut feeling". It's the type of feeling you get that has red flags. Tilting of the head and thinking, this isn't good.

I'm ok where I am. I don't like the cold temps, but I don't have to get out on the cold days. I have plenty to do with the crocheting and still want to do puzzles, so winter will be ok. I have kids near me, and several friends. I know the area, I have my doctors setup, a car mechanic and a hospital really close. The big question at this point is do I really want to move to Florida just to keep warm?  Is there a real reason?  My sis is there, but she's still traveling back and forth to Missouri about an hour away every five months. We can have fun while she's here and I'm still with the boys in winter months. I was told to wait a year to make decisions. It's a good idea. I have to let the apartment know in February if I'm leaving in June. I think I'll sign up for two years to keep the rent the same. I can go to Florida anytime I want if I fly and be with sis and friends down there. I don't need to move. So go with your gut if there's a big decision. I'm feeling really good about my decision to stay. I still feel lost without Jim, that's going to take awhile to have that feeling under control.

It's been warmer here then normal and also sunny. I'm happy about that. It's going to get cold again this weekend, but I'll take the break of having nice temps. I'm hoping it will be a mild winter.
I got some lights from Frank and Angie and I brought a tiny tree from when I moved here from Florida. It's pretty and nice to have lights around. 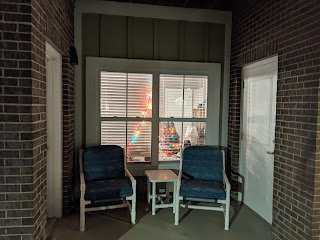 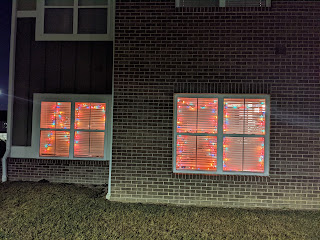 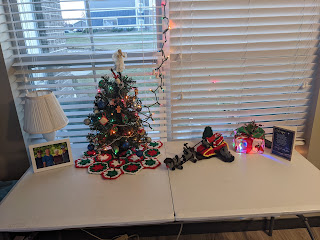 If you want a visit to Arizona, bring it on! I agree with following your gut instincts. Wait that year!!

Wait a year is the best advice ever. My dear friend lost her husband last year. They were here in the park in a motorhome. Three weeks later she traded the mh for a brand new park model which was a good move. But then a month later she was feeling so lost and alone she decided to sell the park model and move back to Maine where kids live. Bought a mobile home there. And is unhappy there. We tried to convince her to just go to Maine fir summers and jeep her park model. Now she wishes that is what she would have done. Just too many decisions made during a sad time in her life. I'm glad you're listening to your gut feelings. Hugs.

I will agree with the others, waiting a year is a wise idea.
It takes at least that to adjust. The person you used to bounce ideas off is not there to help in the decision making. I always try to wonder what my husband would do or say. It's hard. Do the snowbird thing when you are ready and just rent. Mom & Dad had a place in FL and a house in WI. While it was nice to be able to leave the winter behind, there were a lot of headaches having two houses over 1000 miles apart, especially the year two hurricanes hit the trailer and a tornado hit the house.

I did move to FL almost 2 years after my husband died, but was convinced by an old friend. Found out she wanted to use my money to go into business together. Got that gut feeling and sure enough she destroyed the relationship. The other thing I learned was men looking for a woman with money. Any money. I don't have THAT much and inflation is taking more every day. It is cheaper here (taxes)but now on a fixed income don't think I could ever afford to move back north. Best wishes, Dee.