Sunday our son and wife came over (Frank and Angie) to empty boxes from the move in. We had 15 wardrobe boxes. They're big and you have to crawl inside them to get everything out. The big thing now is to find places to hide stuff. We have 3 closets so hopefully I can do it. The apartment is coming together and looks like we have had one box of non critical stuff missing, a few broken plastic boxes but all in all for what we went thru waiting on it to get here we're lucky.

Monday was a busy day with primary doctor and lab. We had to be up by 8:00 to get to the 9:00 primary doctor appointment. She never came in to us till almost 11. She's a talker and by the time we left for the lab work she wanted done, it was 12:20 when we left the lab with a packed waiting room, it was almost 1:30 and we had to rush home to get there for PT at 2:00. I had to take him back for xrays on Friday.  At 2:30 we had the call from the surgeon. He didn't have much to say but I had sent him a picture of the surgery site for biopsy. It's not like he likes it, soo much scabbing, so I have to put warm cloths and wash with soap to loosen it up without tearing any off. That's my next "cleaning job" and will take a picture next week to show him and he'll call on the 19th of August to check it again. We're trying to keep from going to St Louis for an appointment, but still have to on August 11 to meet with the medical oncologist.

Tuesday was a full day of therapy. First thing in the morning was the nurse to catch up to date with vitals and check the surgery scar that the surgeon wanted to have checked, she thinks it's doing ok and no infection. Next was speech therapy. Jim gets aggravated with her but she's trying to help with words and pictures to actually say the words which he thinks he's saying but isn't. By the time she left he caught on to what she was trying to do.  Then the OT, which did another mock up shower to see if he was doing the transfer better. I ordered some handles that aren't permanently installed so he has something to hold on to. 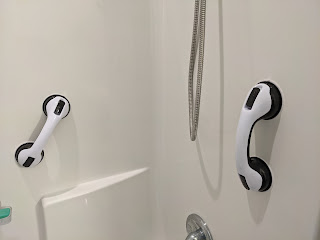 The rest of the day he went thru boxes to see what was needed or not and we got rid of the stuff. He stayed really busy all afternoon which meant;

Wednesday he was really tired. He slept till about 9, we had breakfast and he went back to sleep for a couple more hours. The PT gal came about noon and wore him out again. He stayed up but went to bed earlier then normal. He's feeling so much better without radiation. He's on one steroid for now. I'll be cutting it in half over the weekend, see how he does. 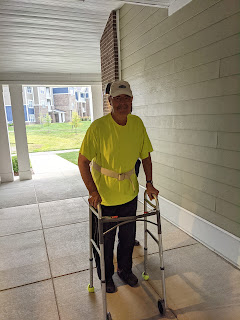 We had the social worker out to help with van transportation if I need it. It takes awhile to get signed up and in the system. I may need it during the winter months. I hate driving in snow/ice and we'll have plenty in this area.
The subtle things I've noticed this week with Jim. He's drooling a bit more when eating. I'll be watching for choking or swallowing issues. He's always been a bit OCD, but it's pronounced now. Things bother him more if not in the right place or it's cluttered and not something that's suppose to be on a table for instance. When he wants something he wants it now. Since he can't talk to let me know what he wants it's more of a grunt or loud mumbling. I'm on a couple facebook groups with Glioblastoma caregivers and it seems to go with the tumor. He wants to get up and go like normal which isn't going to happen, he has a high risk of falling. He's also asking more about things I have just said. Short term memory is also part of the cancer. We both get to sleep in the next couple days. I'll keep you posted on our cancer journey.

I know it is difficult when you can’t understand what he wants——my thoughts and prayers are with you — if you want to talk i am right here—-i spent 5 years watching Don’s condition so i know shat you’re going thru —-Don was so adamant about doing things he got out of the nursing home in the morning and was on his lawnmower in the afternoon— no way i could stop him....Men!!! Much love and many thoughts and prayers for both of you

Oh Dee.... you are both going to be frustrated. And scared too. I guess the old saying applies.... one day at a time. Heart breaks for you both.

Hi, just found this online and thought maybe you could ask if this might help your husband. https://www.bc.edu/bc-web/bcnews/science-tech-and-health/biology-and-genetics/targeting-cancer.html

BTW, those handles for the tub will not support much weight. Just a heads up because he could fall if he puts too much weight on them.

Wishing you the best.

Dee...keep focused on just one day at a time, and know that there are so many people pulling for you both!