I would like to give a good word for those helping with Jim. I seldom do "ads" but the PT, OT and speech has been tremendous from the company of SIVNA. Southwestern Illinois Visiting Nurse Association. If you need help and you're in the St. Louis area (Illinois side) please give them a call.

This week was fun and sad at the same time. Jim's family came in from NC. Sharon, Robin and Johnny stayed from Monday to Friday evening. Frank and his wife Angie had two extra beds for Johnny and Robin and Sharon stayed with us. The two gals are caretakers by trade so I knew their brother was in good hands.

Monday morning the nurse came and I waited for her then went over to my sisters in Missouri. I wanted some down time and get some much needed sleep. I can sleep fairly well at nights, but it's not a deep sleep waiting for Jim to move or wanting to go to bathroom, so it was good to sleep nine hours straight.

Our youngest son, Rick came down from Chicago and stayed in motel while he worked. They had a great time all meeting at our place in the evenings and being with Jim. Tuesday they went to Frank's for a shrimp dinner. The shrimp was caught in NC from the family members that shrimp for a living.  (Click on the pictures to enlarge). 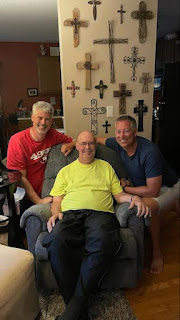 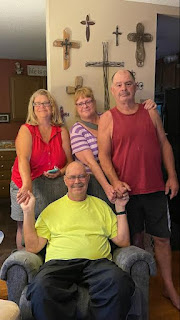 Johnny, Rick, Jim, Sharon in the back, Robin and Frank 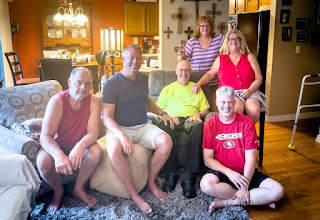 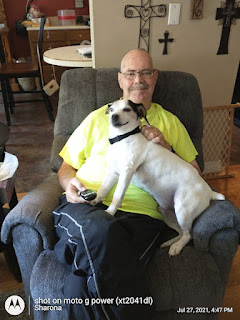 While they were having fun and eating,  I was with my sister and her husband having a good time. She catered to me with food and rest. I went fishing in their pond which is loaded with fish. I got six fish. I never did get the knack to catch more or when you pull hard for a fish when the bobber goes under. I had a great time. 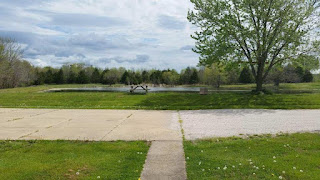 Carley loves fishing too. We catch them throw them back and she re-catches them. 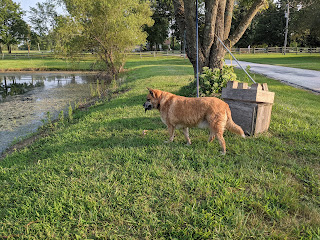 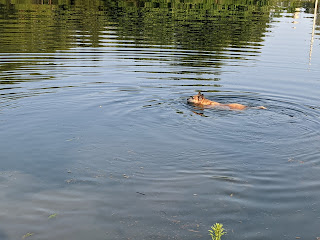 Then she crashes for the rest of the evening. 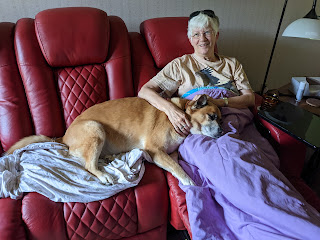 When I got back on Wednesday afternoon, the place was full of people. We had a blast visiting and making Jim laugh.  The gals did a great job telling Jim to drink water and they gave him fruits all day long. 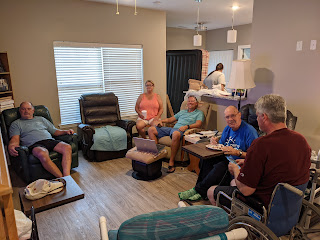 When we got the kitchen cleaned up with one meal it was time for the next one. 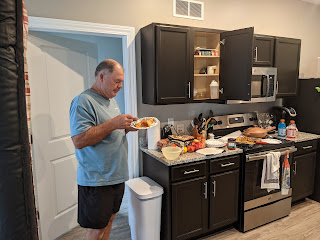 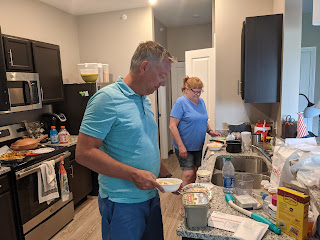 Rick took some shrimp home with him. 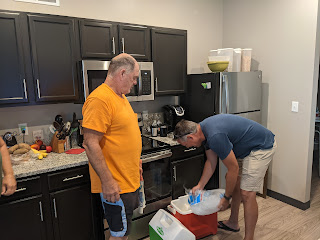 Thursday evening it was a sad time saying goodbye. The family planned on driving all night back to NC and Rick left for Chicago. 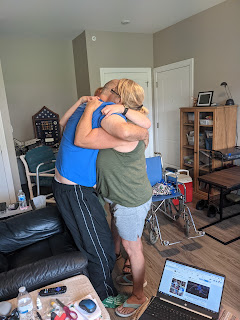 Rick, Jim, Johnny, in the back Dee, Robin and Sharon 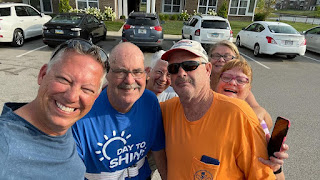 It was so quiet when everyone left. We felt lost. Jim fell in the parking lot saying bye to the family. I'm glad the boys were there to help him up. On Friday we both slept late and Jim was really weak. The PT gal said when he over does it he'll be weak for a couple days. I'm hoping he rests up a bit.
Info for those following along on Glioblastoma and for our records. I called the oncologist to ask about giving Jim  a full steroid tablet instead of one half. I was suppose to start decreasing the dosage to take away the steroid but with him falling more and talking less I wanted to see if the doctor would let me increase it back to one tablet a day. He did, so tomorrow we'll go go back to what he's been taking. I can't wait to hear about the MRI which is August 10.
I made a doctors appointment for me today for a physical. It's someone our son's family goes to. When I gave her my name I was already in the system. That's the second time that's happened. We lived here for 12 years in the 80's at Scott AFB so we went to the doctors around here. I just don't remember who they are. Your past can follow you.

Good to have all that family around in your new place.

Glad you had an Enjoyable time with Family.
It might take Jim longer then others to ease off the Steroids.
Be Safe.

Great photos of Jim and the family. We have you both in our thoughts and prayers. Glad you take time when you can to take care of you!!!