This is a journal of sorts following the diagnosis of Glioblastoma Stage 4. I tell it like it is with nothing holding back.

I got back Sunday from the wedding and noticed Jim was speaking a little better after restarting steroids. I know the radiation doctor doesn't want him on them very long and on Monday that's exactly what he said. The radiation was over on Wednesday and he'll wean him back off steroids in a week or so. There's a big difference but still words do not come easily. He didn't ring the bell for completion of the radiation but he did get his "helmet" and a certificate from the gals that helped with setting Jim up for treatment. 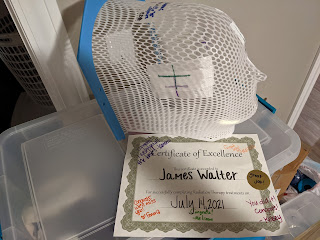 Monday was a day I had figured we better get the blood work done and the xray. Two different doctors ordering the same labs. The primary doctor didn't get the order in, took over a week, so I couldn't get it done. The chemo doctor is in St. Louis and I changed it to do phone call instead of going to the office. I'm so glad to do that these days. They have two buildings in the cancer complex. They both have labs and each doctor will ask for labs in either of the two.  I have no idea why, but it's a pain, because one doctor is in one area and the other doctors use the second lab in another building. I talked them into one lab and got it all done on Tuesday.

Our visiting nurse came and noticed a couple of things. One is very low oxygen level. He also has conjunctivitis in the right eye. It's been bothering him for a couple days. The OT gal also noticed the low oxygen and both gals called the doctor. The doctor never call either one of them. I called and put in a request for something for the eye. She called back about 7:30 and did order drops. I picked them up and got the drops started, the eye is looking better.

Jim is having trouble with constipation which we've learned that's from chemo so another problem we're working on for him. Magnesium citrate  hopefully will do the trick. This will probably be ongoing. He's also having a lot of trouble seeing, so a check for that will be Monday.

I found out the primary doctor we have is only in the office 3 days a week and only answers calls when she has time after normal office hours. I'm hoping to change doctors on Monday. I have another doctor for myself,  so hopefully I'll get Jim with that one.  I did get a call that the MRI is August 10 with reading of it on August 11. We'll have to go to St Louis for that appointment.

The rest of the week was OT, PT and Speech. It was great not getting up and going for radiation after Wednesday this week. I'm learning as much as Jim on how to do showers, and different exercises to strengthen the right side of the body.

I got a call on Wednesday that the house in Florida sold. At least someone is putting money down on it and is doing an inspection and checking with the office to see if they will be allowed in the community. That was another big worry to have two payments to make on rent. I'll be happier to get the money in the bank.

The biggest news!  We have our household stuff. This is a story that you'll love. If you ever move be careful who you get to move you. This has been so upsetting and stressful. I went thru the internet and thought I had checked everything possible with reviews. I found what I thought would be a decent mover. I know moving isn't like it used to be in the military it's very expensive, anywhere from $6,000 to 22,000. I found a company that took a discount off for military moves. The one thing I read was a guy was disgusted about movers and he was former military so he started his own company. The company name is Moving and Storage Squad. The down payment went to  GLOBAL HOME LOGISTICS.  I wondered why the different name, but didn't think much about it because that usually happens when you deal with one person and the company that actually picks up and delivers is another company.  That's not the last of it. I paid money to Global, then to Moving and Storage.  I dealt with Moving and Storage with a gal that set me up and I asked for one week delivery. She said that wouldn't be a problem. She asked what I had and we went back and forth several times. She always wanted to know what BIG ITEMS I was moving. I told her the bed, 2 chairs etc for things that didn't fit in boxes. I also said  we had a one bedroom double wide mobile home. WARNING:  At this point be sure someone comes out to assess what you're moving.  I wish I would have had someone come out. I didn't have time or energy to pack myself, so I left it with the movers. Another company came out named Cosmos Transport. They had  Moving and Storage pass the whole move to them and the guy in charge of packing and picking up charged another $5400 to pack us up saying there was a lot more then expected. If I had time I wouldn't have let him have it. That made the total move almost $7,000. Big difference then what was first quoted. It took a full month and two days to get our "stuff". Two legs are torn off the big TV stand and 4 plastic boxes are broken, but so far that's all the damage. I'm glad to have everything now to help Jim better. It's putting it all away that will be challenging. 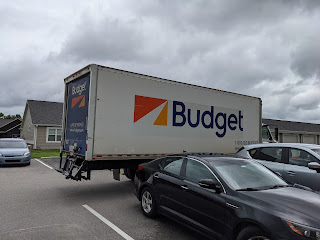 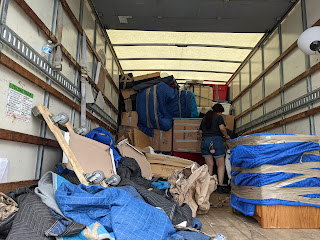 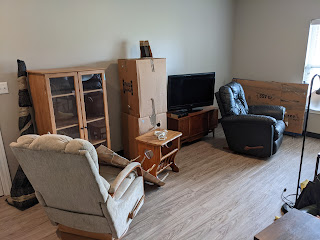 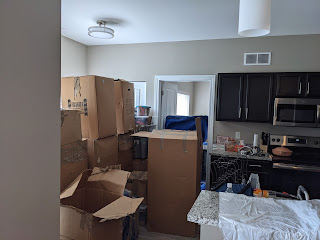 The big TV was the first thing in the apartment. 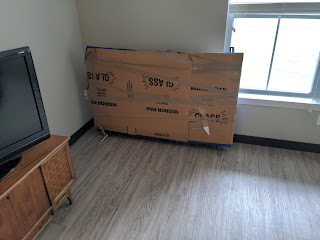 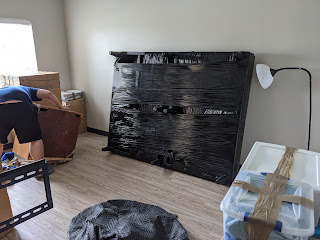 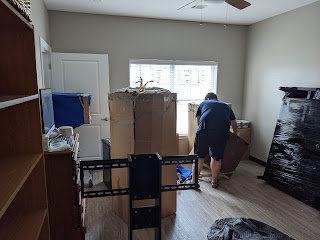 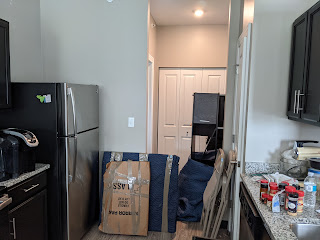 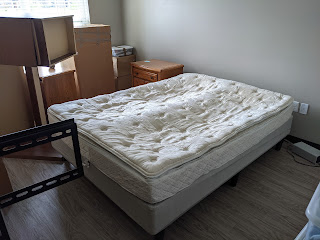 We were really worried this wouldn't make it. 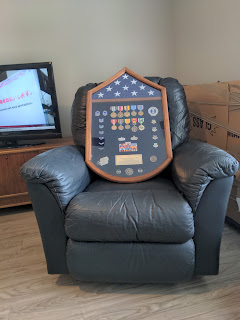 Glad to read that Jim's treatment is over. Now he can start getting back to pretreatment activities.
Moving is one of the top stressors that cause problems for people.
Be Safe and Enjoy your apartment.

Oh girl...... You are most patient. And so much work to do. So you are an amazing woman.

I'm so glad Jim is finished with his treatments and you sold the Florida home. Everyday will get better hopefully!