Auburndale, Fl  (Hi 92 Lo 76)
I finished a couple puzzles this week. The one that I started last week was so different. The pieces were funny shapes and very hard to see where they went. 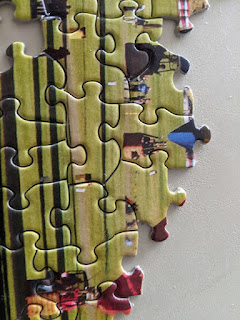 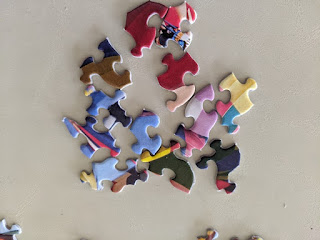 At least it turned out a really pretty picture. 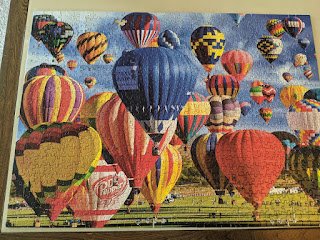 I worked on a  another puzzle for a couple days and finished it in no time. This one was used and 550 pieces. At least it was a normal puzzle. Both puzzles had a piece missing. 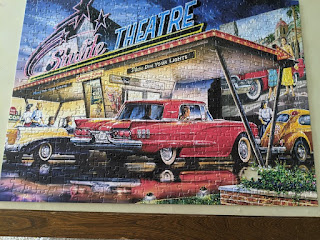 Now I'm working on a vintage puzzle and it's more like normal that I did as a kid. I'll post it when I'm finished. It's National Parks. I may have to keep that one, depends on how it looks when it's done. It sure passes the time and there's something to show what you've done. I'm going to exchange the puzzles I've done with a neighbor that has a few.  I ordered a couple puzzles this week so I still have some coming in.  I ordered a puzzle for Halloween and ended up it was from China which took 19 days to get here, BUT it wasn't the one I ordered now I'm trying to track it down. The website is gone and no way of contacting the company that I ordered it from.
The one they sent is flowers,  the ghost is what I ordered. I searched all over the internet for a replacement but all out of stock. Maybe they sent the flowers in place of it. I won't be doing that one. 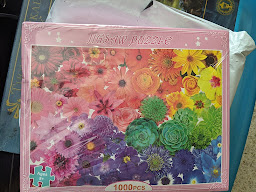 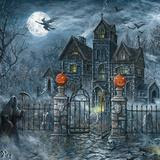 I'm not the only one that has a hobby. Jim has a new one with Lego's. Our youngest son has been putting together kits for quite awhile and sent Jim an Aston Martin 007 Bond car  It's quite a project with 1290 parts. 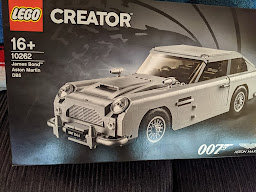 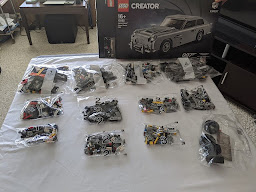 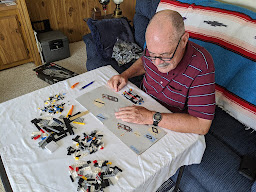 I'll have more pictures next week when he's all done with it. He's impressed by how the parts are put together and how smoothly the project is going. The best part, no glue.
I'm getting ideas for the village and looked up on youtube what people have been doing, I'm adding mountains and a tunnel for the train. I can't believe all the things you can do without spending a lot of money to make it look like a snowy village. I noticed the sun hitting it this week so took a picture. I have plenty to do, puzzles, more crocheting (starting Christmas projects) and still volunteering at hospice. I'm content and BUSY.

We did a day trip to get out and away to Brandon. It's near Tampa, a neat town with everything you could possibly want in the area. I needed new insoles and Happy Feet is where I got the last ones so we decided to go while they were still opened. We thought we had the right store, but when they saw the soles I have, they said it wasn't theirs. The store I needed was down the road a bit. We thanked them and moved on. Sure enough the store I needed had my name in the system and had the soles I needed in stock. We went to lunch at Portillo's which has great chocolate cake. Our son introduced the restaurant in Chicago. Great place to eat if you're in the area. 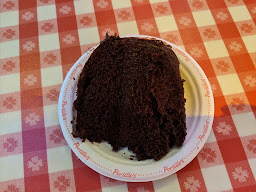 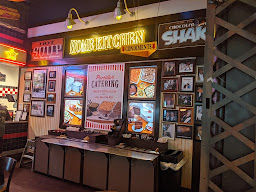 We're staying busy and having fun. We'll get out once in awhile. See you next week.