Down the Youtube Rabbit Hole - An Owie - Lego Car - BASEBALL

Auburndale, FL (Hi 92  Lo 74)
It's been another week under Covid19. I've stayed busy with going on Youtube. I wanted to see how people made the winter villages. There's a ton of them out there, and each is different size. Then I wanted to see how to make roads, steps, water falls, ski jumps, rivers, and it was hours later that I gave up for the day, but there's always the next day. I've learned a lot and in the meantime I found mountains, which is easier to cut out of Styrofoam with a hot iron. I ordered it. 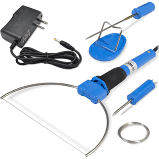 I also found five puzzles on ebay, which lead me to village people and accessories for the village found on Ebay. Now I have both projects going and had the idea to keep the village up all year, I'm going to change out figures and things in the village to look like spring/summer, then change to fall/winter for next year.  I know the buildings have snow on them, but ignore that. The ski slope will be a water fall. Get the drift?
Tuesday Jim had a tooth pulled. It took over an hour. The dentist had to remove an old root canal and it kept falling apart. Jim was in a lot of pain so he took a couple pain killers, but only for the next day. He took Tylenol for the next couple days along with using a lot of ice packs. He's doing better but still hurting, but glad the worst is over.  The next step is a bridge.
Here's some of the pictures from last weeks hobbies. Jim's Lego Aston Martin car is done.
There were packs of parts. This is the start of the inside of the car. 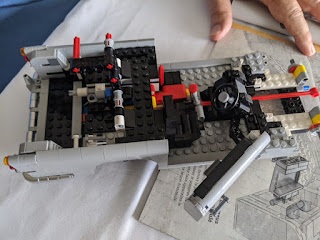 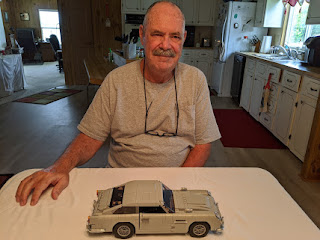 Click on the link for a video of all the moving parts, including the ejection seat. REMEMBER IT'S LEGO'S.
https://photos.app.goo.gl/X9vbkx3BRCzKnwvS7
I finished the vintage puzzle with National Parks. It was a great puzzle and only took 25 hours. 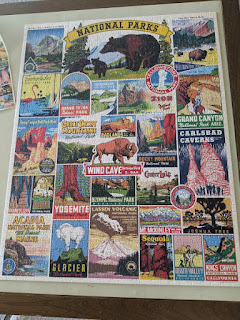 I swapped puzzles from a neighbor and one was given to me from another neighbor. I now have plenty to keep me out of trouble. (maybe).  I did work three days at hospice on the computer, so still get to be with other people.
BASEBALL has started. I think every sports fan in the world is watching. They're doing a great job with the sound effects making it sound like there's people in the stands. We found out the Rolling Stones concert is cancelled and we get our money back. We're still waiting to see about the October Indy car race in St. Petersburg for cancellation or not.
Activity on the canal this week and storm clouds while driving home to close out the week.
Muscovy Duck 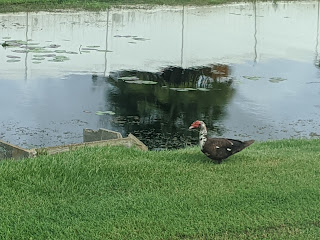 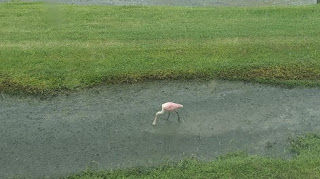 Every time it rains hard and these birds are at the canal, they face toward the wind and rain and sit real still. It's fascinating. It's like a group meeting. 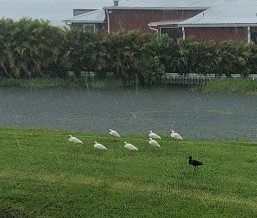 One our largest turtle (tortoise) came to our side of the canal.

The afternoon storm was just north of us. 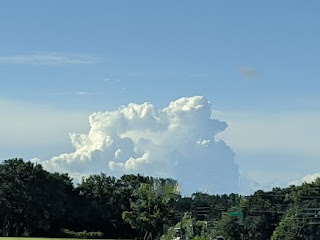 This storm was from Okeechobee taken from someone that lives there. 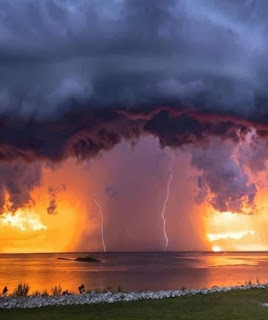