This was a fun week with parties and meetings with hospice personnel and volunteers.
Saturday was the yearly party which was held the P Ranch in Bartow. It was a great place to have parties with plenty of games for the little ones. It was good meeting with people from Sebring and Bartow.  Sign up table when you arrived. 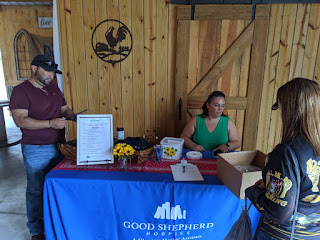 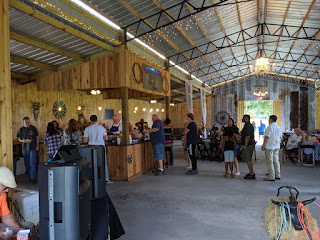 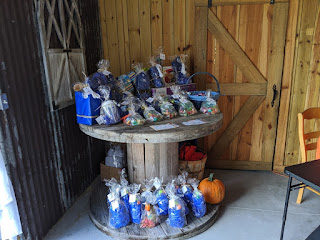 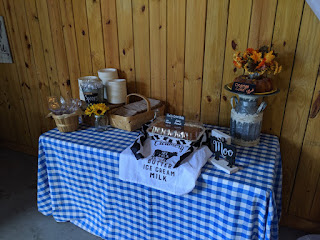 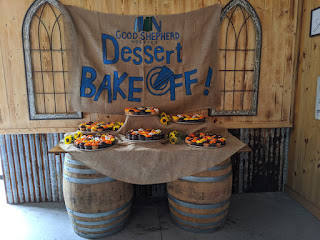 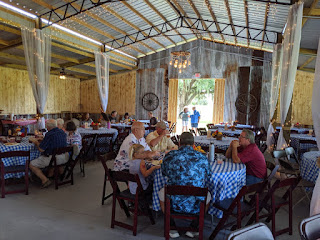 It was a great time and watching the little kids was a lot of laughs.

Sunday was knockers bingo. I keep forgetting to get pictures of the group. The northerners are arriving so more people are playing. It's a once a month card game which is a lot of fun.

Monday was a mandatory meeting for hospice volunteers. There was a great group and again I met some people from other areas. 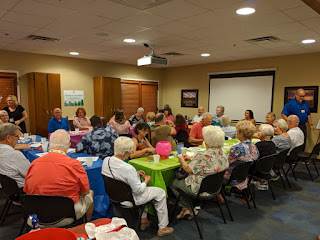 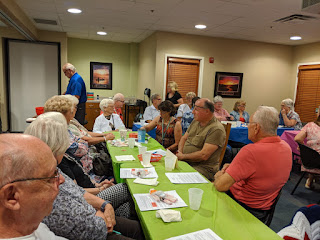 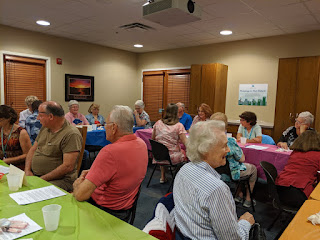 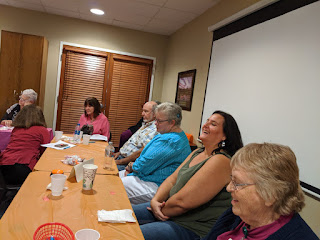 It's near Halloween and a cute candy holder is a plastic glove. 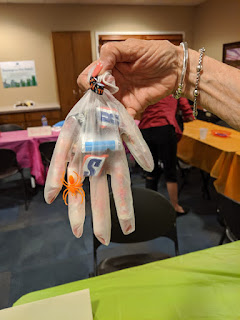 Tuesday I went back to the dentist for surgery on the tooth that I had a root canal in August. I still had pain with it, not a sharp pain, just an annoyance. He took two hours and 15 minutes to clean it back out and go deeper in the root. He said in all his career of root canals he's done, I'm the first with this kind of root he's seen. Most people have two or three roots in a molar. I have one and it was very small and very deep. I think it's fixed. It's day four today and it seems to not hurt unless I eat. There was a lot of work on it so it's still tender, especially around it and where the shots were given. I go back mid November to have it finalized if no more problems, then get a crown. I'm hoping it's all over by January.

Wednesday was a normal meeting in the morning at the clubhouse and hand and foot card game in the afternoon. I crocheted the rest of the evening and night.

Thursday morning was a bummer. I went to the freezer to get some meat out for dinner and found the freezer had defrosted. Everything in it was defrosted. I found the plug had been pulled and not sure when. We had to go get groceries and get meat so that was the afternoon duty.  I won't get as much as usual, we'll just go grocery shopping more often then once a month.

We have a tropical storm coming up to the panhandle in the Gulf so we're staying in this weekend. It should be gone by Sunday.  I was hoping to go to another craft fair tomorrow, but not with that bad of rains and wind. We need the rain, it's been awhile since we've had rain for the lawns.

Friday night Nestor came for a visit. The tropical storm in the Gulf is a fast moving storm but it packed a punch by sending a tornado really close to us. Lakeland was hit and tore up a school, turned over semi's on I-4 and turned over an RV in someones yard. Roofs were damaged and trees down. It was only thirteen miles from us. No one hurt. We had a lot of rain, but not much wind.

The lake didn't have big waves but the other side of the lake wasn't visible from so much rain when we got up Saturday morning. 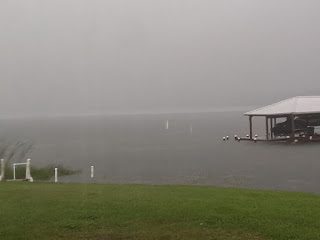 It's suppose to be nice tomorrow.

We saw on the national news that a Vilano (like we have and Mike & Terri) was tipped over onto their house in that storm. Wow!