Week in Okeechobee with Sister - Special Story about Nature

Monday I worked at hospice and Tuesday I went to Okeechobee to be with sis, Doris, for the last week of her summer stay in Florida. She's back and forth from Missouri and always comes for the month of July. We met her in Sebring which is an hour from our place. We had lunch at one of our favorite places, the Blue Lagoon. When we got to Okeechobee we did a walk in the late afternoon with her friend,  so I joined them. It was very hot and I felt dizzy before we got back in cool air. It's basically the humidity that's bothering me.

Wednesday we got up fairly early and had breakfast. We didn't have to do or go anywhere till 11:30 when we met up with a couple gals from town. They are sisters and have lived in Okeechobee all their lives. We had a few laughs then went to town to get a couple things and back home. We had a big storm come in just as we got back. Good timing.  I forgot pictures except for the place we ate. It's called Shennagans  a hole in the wall which has the best food. They have the best alligator bites.
(Click on the pictures to enlarge). 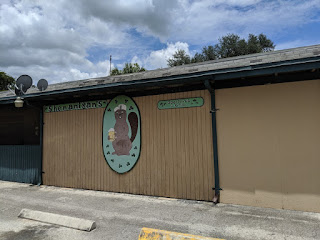 The clouds around Lake Okeechobee can bring in big storms. Here's what we got hit with later in the day. Doris and Sandy and I were going on a "short" walk. We got back just before it poured and lots of lightening. 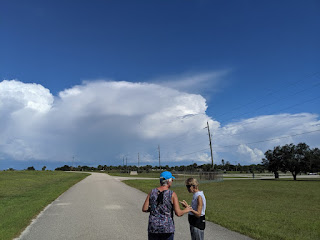 Thursday, we got up early and went on the Okeechobee levy.  Lake Okeechobee is low this time of
year. It's really getting hidden from growth. 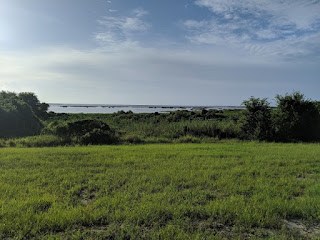 We also went down to the canal where the boats for the park where sis lives in and saw a few alligators. Look at the black dots in the water. They're eyes of baby alligators.  If you click on the picture to make it larger you can see the dots better. 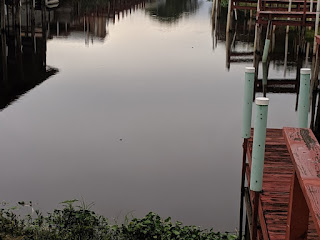 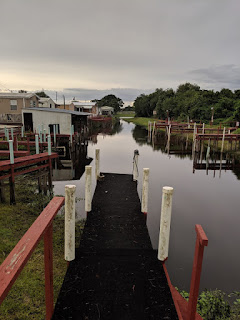 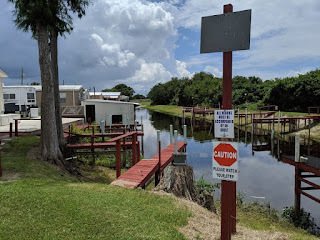 There's very little water in the canals and they're very overgrown. . 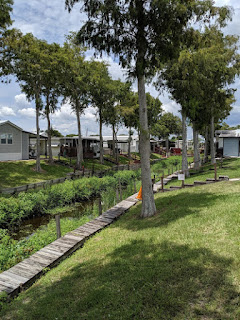 We went to Canal Point, Palm Beach County where the  water from the lake goes in and out of the estuary.

More pictures of the lake. It was just starting to rain so the pictures a little dark. We were about 10 minutes to late to catch the sun.  If you didn't know it was a lake it looks just like the ocean. 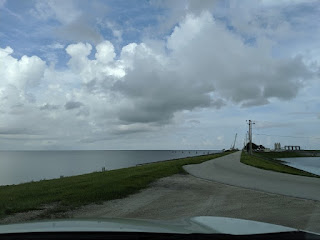 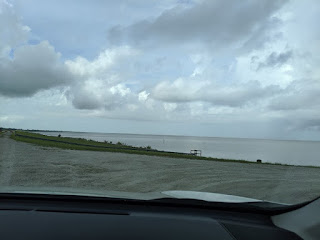 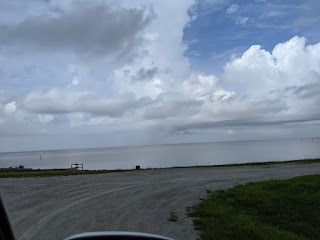 In between storms and down pours we went to Rio Bravo for Mexican dinner. We took Margie and Sandy with us. A great dinner with great people. 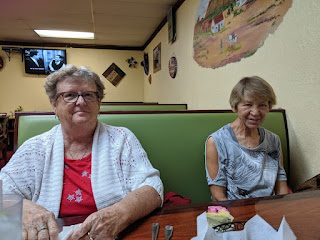 Doris, my sister and me. 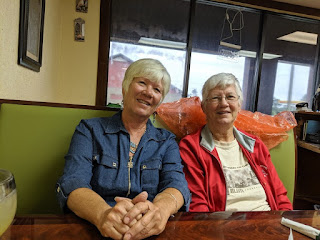 Friday  was  pack up day and back to our place for a night on the way to Missouri. The laundry had to be done so that was first. Doris has a checklist of what to do to shut down the house just like RV'ers do when they're going somewhere. I stayed out of the way.  The water heater needs turned off, the ice maker turned off, the water heater and water turned off and a long list of other things. She'll be back in October. The golfcart had to be covered and put in the neighbors carport. It took a couple hours to get things closed up, then she puts out bombs for bugs and locks the door. The neighbors watch the place for the next few months. We stopped in Avon Park for lunch and got home at 2:30. A couple hours later it stormed and poured rain. Good timing (again).

Here's a story about nature while sitting watching for the bobcat that's around in the evenings by the docks at my sisters. A squirrel went down the road and was carrying something fairly big. We realized it may be a baby. She would stop and check the area then run then stop and run. We didn't think much about it but a while later she was running down the road as if it had something to do the other direction. Quite a few minutes later she came back with another little one in her mouth. This time we followed her around the back of the house and she went up a light pole. At the top of the light pole is a cap. She carried the baby all the way up, we were hoping she wouldn't drop it. She then went back down the road and came back with the third little one and up the pole she went. We may have missed her before bringing back three babies, but at least we saw nature in action. We  looked up on Google how many babies does a squirrel have and it said eight to 15. They sometimes move babies if there's fleas in the nest or the nest is in danger or compromised.  The nest she was taking them from may be in danger with flooding from the hard rains we had she may be moving them to keep them dryer.
This is the pole, see the cap at the top?  Click on the picture to make it larger. 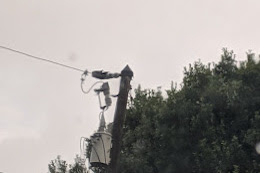 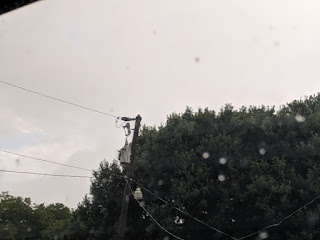 I had a terrific week.