This is going to be a short blog. It was a very quiet week.  I stayed busy but not with anything new. I did a lot of crocheting and the normal stuff like volunteering at hospice Monday and Friday, playing cards and the Wednesday coffee.

Tuesday I took one of the neighbors to Curley and Keel winery for some wine. My sister wanted more bottles and I wanted to get two more. It was a quick trip with lunch at our favorite Cuban Sandwich place, the Strawberry Hut in Plant City.  We wanted to get back before the rains came and we made it with an hour to spare.

It's been raining most of  every day this week. It's now coming in from the West, last week was from the East. Winds can change fast around here. Lightening is super dangerous. Someone was struck on the beach in St. Petersburg area and died this week. Just can't be careful enough.

Friday I had my last dental appointment. The dentist tried to talk me into a crown. I'm not doing it for now. I wanted just a filling but she said I can't have one without a "build up" so I agreed to do it. I have to be careful not to chew on anything hard so the tooth doesn't split. I'll have to chew mostly on the other side. I'm finally done with all the yearly doctor appointments till October and December. I try to go as little as possible.

We have little frogs all over the place. This one is a little bigger then the newborns that's in the carport. They have a very loud croak to them. 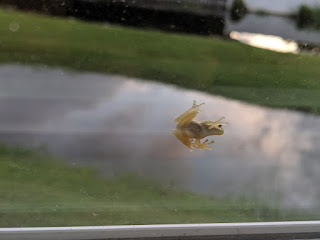 My second mouse. I'm going to make a few more, they're selling fast. 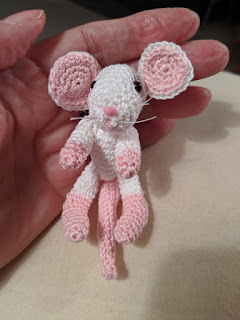 I'm trying to debate if I want to sell this sewing machine. I haven't used it at all and I want the room where it's sitting. Yet, I know how to sew and there's a part of me I'd like to keep it. I'll make up my mind before long. 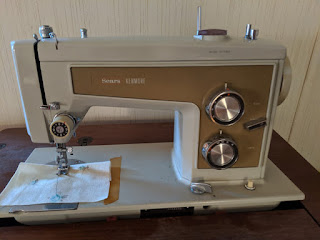 Next week will be a good one. I just hope we have less rain.