It's been a few weeks since we've seen a  movie and Jim wanted to see Bad Times at the El Royale. It has a few twists and turns,  I give it two thumbs down but Jim said it wasn't THAT bad. So we'll rate this one thumbs down for me and half thumbs up for Jim. 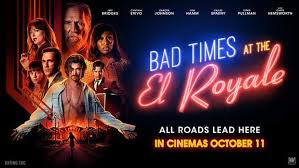 I started back with dominoes game of chicken foot this week. It's been over a year since I've played.  I like cards and dominoes and between the two, I stay busy.

The Wednesday morning coffee meeting went well and then we went to the Sun Communities Workshop 45 minutes north. There were several people for lunch then more people came for the meeting. We learned a lot from one of the speakers which was a county sheriff deputy for many years. He told us the changes in the area today with more robberies happening during the day instead of at night. There's more scams and it takes a lot of thinking to stay ahead of the bad guys. The rest of the meeting was about FMO (Federation of Manufactured Homes) with an amendment coming up wanting to change the taxes cap and we listened to some of the problems in the surrounding Sun Communities. We didn't get home till later in the afternoon .

I'm still getting vendors and workers for the craft bazaar next weekend. It's getting closer and I think it's all ready to get underway. The setup for vendors will be here next Friday and the bazaar is Saturday so the blog will be posted on Sunday instead of Saturday next week.

Sunset from this week. The sun is getting closer to the south. 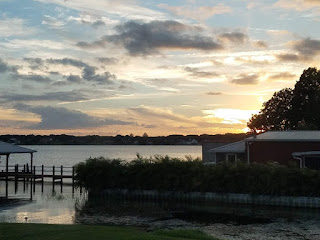