North Carolina Part 2 - Back to Normal

We had a great day on Saturday with Jim's sisters, Robin and Sharon and Sharon's boyfriend Jimmie. Beaufort has grown quite a bit since we were there a year ago. They have a big new bridge that is a bypass of Beaufort and the draw bridge which is always up when you're in a hurry. It's a great little town and people stop in for the wonderful restaurants. Now, it's not crowded and no waiting in lines of traffic, it's an even better place to see.  We had dinner at Amos Mosquitoes in Atlantic Beach,  which has soft shell crabs. I love lobster, but soft shell crabs are also a favorite and they're only available certain times of the year. Luckily they're in season, so we found a place that serves them and they were excellent. The neat thing about this restaurant, they have swamp noises and sounds of mosquitoes in the restrooms.
My wonderful meal, in the little dish is cole slaw. 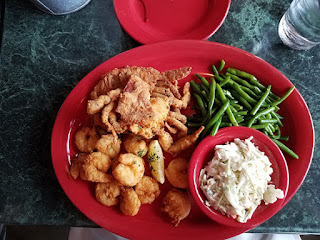 Sunday, we had a down day. We got up later and just visited with other family members. Jimmie makes several veggies for meals and he did linner for us. That's dinner and lunch time frame. It was so good and we were so full.
A couple views of the area near Beaufort. 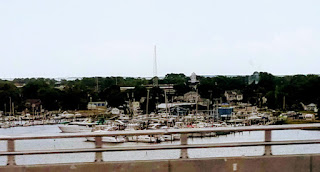 The new bridge is in the background to the right. 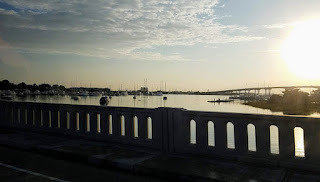 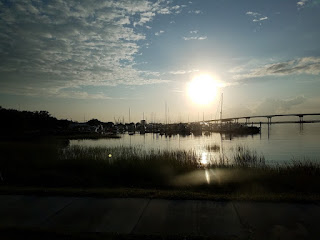 On Monday, we left for home. There was more truck traffic but still had great weather and only a few that wanted our lane so we had to slam on brake or move over real quick. We're finding that's becoming more of a problem. We passed a plane. Yep, a plane all in pieces. That's not something you see daily. 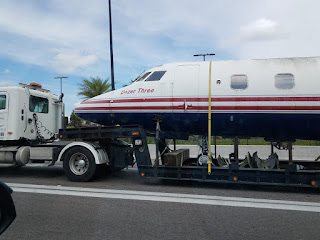 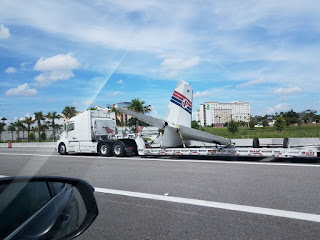 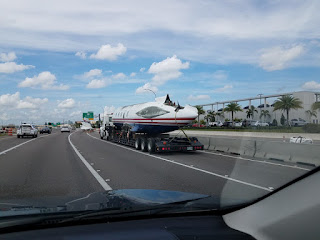 We got home on Tuesday about noon. We unloaded, put stuff away and I was ready for the normal week in the community. Wednesday was the weekly meeting, then hand and foot card game. We also had the palm tree guy cut back the tree. That has to be done twice a year. 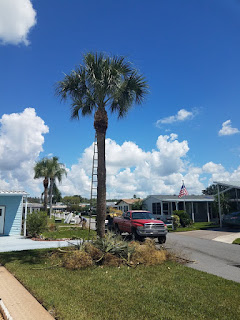 In the summer we have blind mosquitoes  and they take over the place. They're tiny white mosquitoes that come in with the storms or winds from the south and they DON'T bite. They cling to everything that's light colored. it's a lot worse in person.  We sprayed down the golfcart and the house. 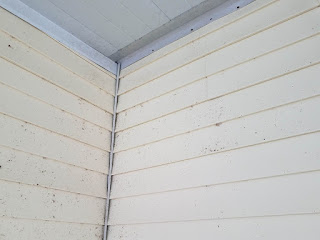 There's been storms around, the clouds are really pretty. Some with a silver lining. 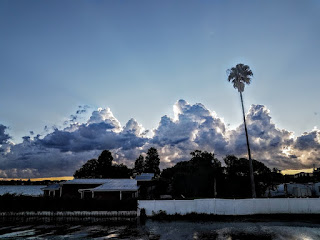 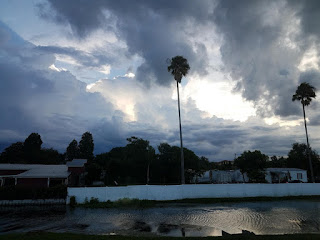 The little Blue Heron has been around the past couple days. The bigger one was here before we left but hasn't been here since we've been back. 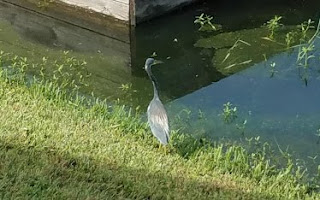 I did crochet a little Mickey Mouse. 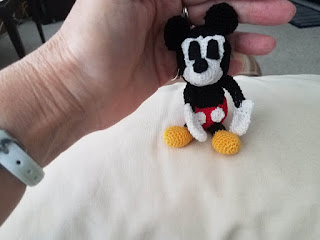 Jim went to the Joker Marchant Stadium in Lakeland to see the Palm Beach Cardinals (baby birds) and the Lakeland Flying tigers. He works at the stadium in March for spring training. 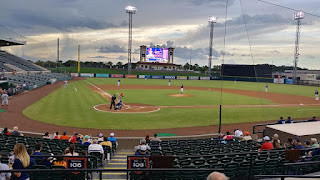 It's back to normal. The holiday is Monday with a potluck. I'll write about it next week.