This was a busy week. The community garage sale was last Saturday. I got up early and went to a neighbors place to sit with her for the morning. We could have sold a lot of coffee and donuts it was a chilly morning. I only had five items and those sold. The lady I was with sold a lot of her stuff and there was a lot of traffic going thru the community. It was a good day. (Click on the pictures to enlarge).
This man bought a plastic plant and decided to wear it on his head. 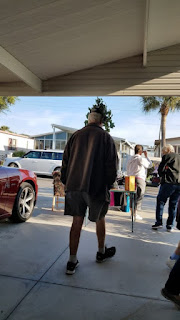 Kathy wanted to be bought but wasn't sure of the price, so she put several prices on herself. 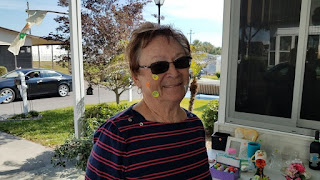 Wednesday was our 48th anniversary, but we celebrated on Tuesday night with a meal at Red Lobster. They're having their lobsterfest and we both love seafood.
Jim had the Captain's Feast

I had the Ultimate Feast 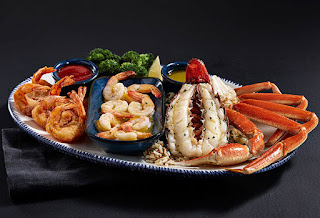 We were going to go to a movie, but was working on our computers and forgot to go.
Wednesday was the morning meeting and Jim had a dentist appointment. By the time he got back I was playing Hand and Foot at the clubhouse. I got home in time to get dinner and go out with some of the gals in the park that's why we celebrated our anniversary last night.

Our community is gearing up for hurricane season. We had the Polk county Emergency Management come to give us a talk after our weekly morning meeting about where to go, what to pack, and what to expect at the shelters. We stayed home when Irma hit last year, but we might think more about going north next time if it's that big. We do plan on getting a generator, just in case. When you have hurricanes you realize just how much you rely on electricity. We didn't lose electricity with Irma, but many did around us.

Thursday night was the HOA (Home Owner Association) for member certification. We all fought sleep, all the leader did was read rules and procedures from the website. I had just read it a couple weeks ago. No explanation was given just read it. Two and half hours later we were on our way with our certificates. There were several communities involved. It's a requirement for being on the HOA board. 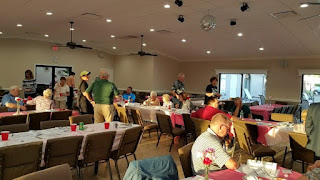 Jim was working at the Tiger stadium all of March. His last day was Monday. In the parking lot were these car carriers ready to take the team players cars to Detroit. 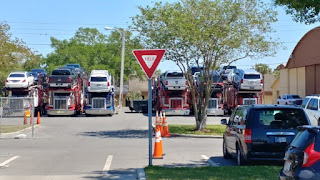 Friday was the shuffleboard luncheon. We went to Golden Corral in Lakeland. I'm slacking lately with not taking pictures like I normally do. There were 22 of us. A lot of residents are headed north this week so they can get their taxes done so we had a goodbye luncheon.

This weeks project was a dinosaur. 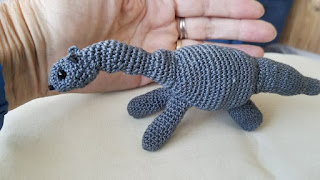 It should start calming down in the community. It's time to plan what we'll be doing for the summer. See you next week.