It was a quieter week but we still had some fun. Saturday we took a bus trip with the community travel to Show Palace in Hudson, FL.  It was called a Doo Wop Christmas. No pictures were allowed.  They had a wonderful buffet and the musical was well done.  The singers blended well and it was a good time. Doo Wop was songs from the 50's, I personally hadn't heard of a lot of them.  The bus seats were quite close and we're both tall so it was uncomfortable but at least it wasn't much over an hour travel.

We did buy a drink that was in the "leg" from Christmas Story show. Now it's in the window with lights in it. 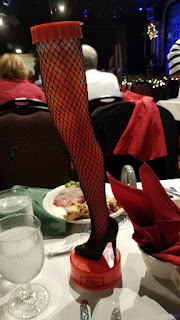 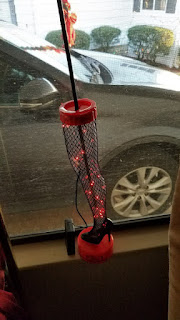 This week I'm back to normal events at the Clubhouse.  The HOA (Home Owners Association) meetings are twice a month unless there's a special meeting to solve a problem. Line dancing, card playing hand and foot, crafts which no one has been coming so not going to have crafts that till January. Then we'll see what happens. I may forego crafts totally, just no interest. Jim had his second eye check for cataract surgery on the 18th. Shuffleboard is also twice a week.

We decided to see a movie on Friday  "Three Billboards outside Ebbing Missouri". There's Oscar buzz with this one and we agree. It's a great movie and would recommend it highly. Two thumbs up. 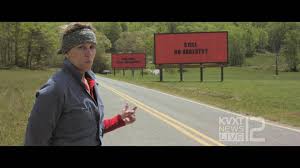 We're still going to basketball games an average of five times a month.

If you're bored or stressed out. Jim found something on youtube.com that's great to watch. Click here.  Marble races.

We're all ready for Christmas so we can sit back and watch others. See you next week.