The movie of the week was American Made. It's the story of Barry Seal, an American pilot who became a drug-runner for the CIA in 1980's in a clandestine operation that would be exposed as the Iran-Contra Affair.  We give it two thumbs up, it's very well done and the best part, I'm a big fan of Tom Cruise. 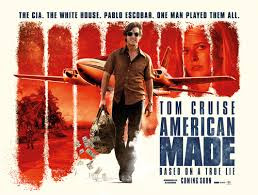 The winter events will be starting up in November so we our first board meeting of the year was held this week. Sandi and I were inducted into the board and will now be part of what happens to the community.  I was on the HOA in North Carolina so it's nothing new. 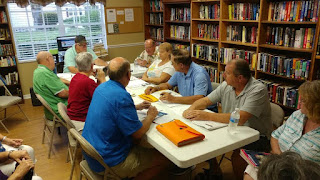 We've wanted to get a flag for our house for quite sometime and finally put that up this week. Our neighbor has one to so we're calling it the corner for flags. 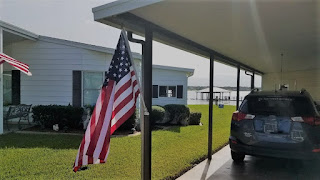 I mention the Craft Bazaar a lot, but everyday I'm doing something for it. We started the craft classes back up on Thursday afternoons. We're talking over things on what to do for the bazaar and also making mats for the military like we did all last winter. I'm also making bags to sell to help with postage to send the mats overseas. It's something ongoing and gives everyone in the park a chance to join in for a good cause.

Friday night we had a park dinner with food brought in from a nearby Chinese place called Green Tea. Kathy was chairman and her hubby Chuck was the helper. We had 85 attend and had a lot of food left, so we got to do a takeout afterwards.

The men served everyone. 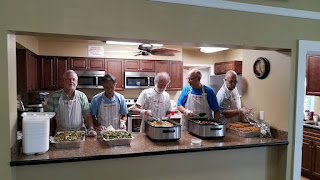 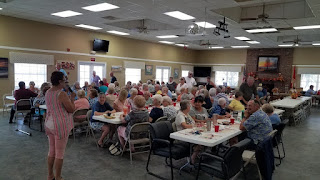 A BIG alligator has been roaming around at the end of the canal this week. It caught something in the water and flipped and rolled, then laid quiet and lurking. They're fascinating to watch.

See ya next week.