Newport, R.I. (Why Do They Need Such Big Houses?)

(Greene, RI) Hi 80 L0 61 – Everyone has a fascination with how “the other half” lives, and the most visible evidence of wealth is large homes. Today we got our fill of looking at large homes. We took advantage of this beautiful weather and drove about 30 miles to Newport, RI. Newport is one of the legendary playgrounds of the very rich, and I can’t imagine another place with more mansions in such a small area. The largest mansions were built during the “gilded age” of the 19th century by the gazillionaires of that era, but are now managed and preserved by The Preservation Society of Newport County. (I can’t imagine what their donor list looks like.)

We drove down R.I. Route 102 through heavy forest, with small homes and cottages set back into the trees. We got to the coast and had to cross this large bridge into Newport (which is on an island). (Click on the photos to enlarge them.) 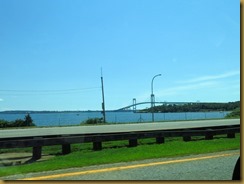 Dee was driving, and she doesn’t like bridges. She stayed in the center lane the whole way. 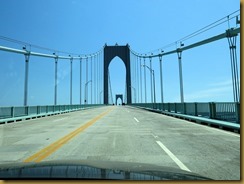 The “historic” downtown area is nothing but expensive “boutiques” and artsy-fartsy shops and galleries, which didn’t interest us. It was crowded with hardly any place to park anyway. We kept driving. I did a little research and learned about the Newport Cliff Walk. It’s a 3-1/2 mile paved walking path along the waterfront that passes many of the large mansions. We lucked out and found a parking space 1/2 block from the walkway. We didn’t walk the entire Cliff Walk, but chose a 3/4 mile section that passed in front of the famous Breakers, built by Cornelius Vanderbilt in the late 1800’s and the largest and most ornate mansion in Newport. 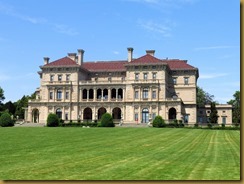 Here’s a view of the front of the mansion. I had to sneak inside the gate to get this photo because we didn’t have tour tickets. 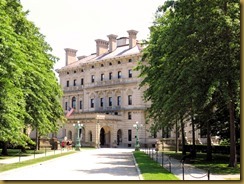 Nearby are two mansions owned by Salve Regina University, a small Catholic university. The buildings are actually part of the university campus. (It must be a really rich school!)
Vineland… 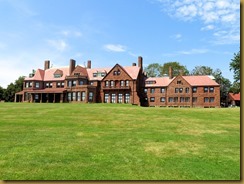 … and Ochre Court (the Administration Bldg. of the school), the second largest mansion in Newport, after the Breakers. Love the Gothic French design. 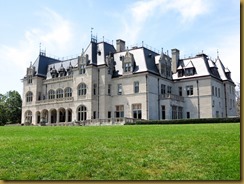 As impressive as the mansions were, we also had some great views of the cliffs and ocean. 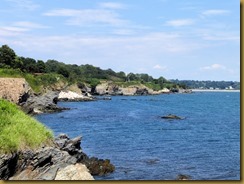 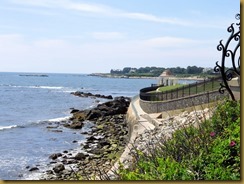 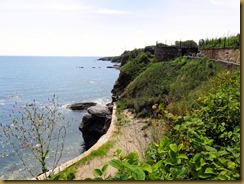 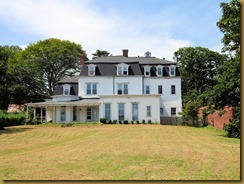 After our walk we continued our driving tour. Bellevue Avenue is famous for having many blocks of large homes, so we tried to grab as many photos as we could while on the move. I’m sure some of these homes have a pedigree of some sort (the [fill in the blank] home, etc.), but I didn’t bother with doing that much research. I just love looking at them. Here are a few. 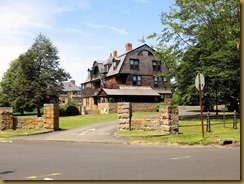 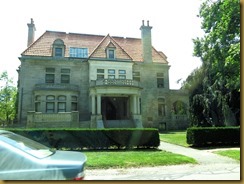 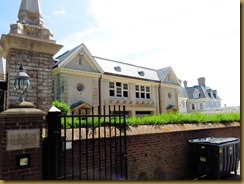 At the southern end of Bellevue Avenue we turned onto Ocean Avenue for a nice three or four mile drive along the waterfront. More large homes. What DO these people do with all that space?? 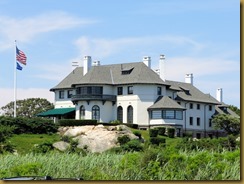 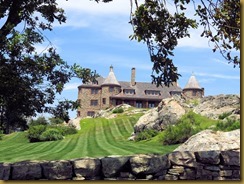 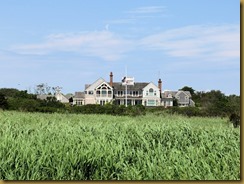 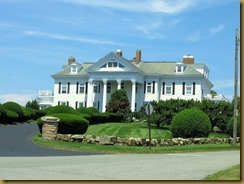 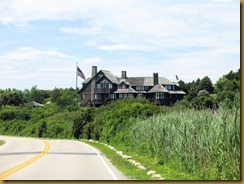 This relatively small (for Newport) home looks really charming. Why do I think of Hansel and Gretel when I look at this? 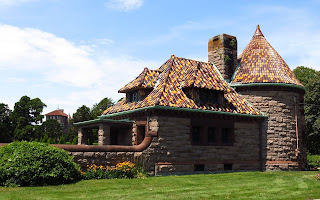 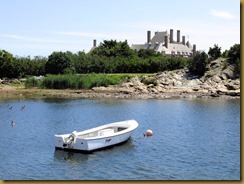 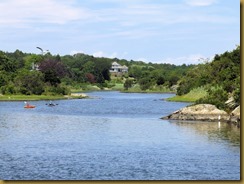 We passed the harbor, with a nice distant view of the large bridge we crossed. 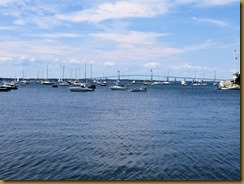 When driving around Newport we saw a lot of these small vehicles. We’re not sure what they’re called (scooter cars?), but apparently they rent them to tourists. They were all over the place. 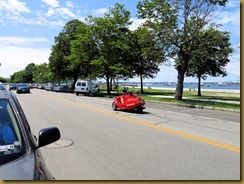 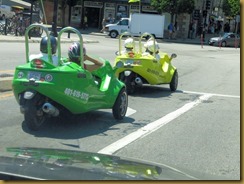 After stopping for lunch in nearby Middletown (we weren’t going to pay the high prices for lunch in Newport) we came back home. Newport was a great place to visit, but we sure wouldn’t want to live there. The lifestyles of the rich and famous is fascinating, but when we think of all the pressures and responsibilities that go with that kind of life we’ll stay right where I am on the social ladder, thank you very much. We love our 350 square foot home and wouldn’t want to live anywhere else. Besides, it’s pretty hard to tow a 35,000 square foot mansion.

I always felt the same way about Biltmore in Asheville. It has something like 54 or 64 bathrooms, and I think any man who needs a house like that to entertain his friends has more money than brains.

Maybe the answer to the why part of this huge home display was given by Bill Clinton when asked after he left office about the Monica thing. It was a simple answer-I did it because I could.

We like going thru mansions to see how they lived.