A Drive Around the Area (And a Pleasant Surprise)

(Epsom, NH) Hi 77 Lo 54 – It was another spectacular day, so we thought we’d take a drive around the area. We set out to go by the New Hampshire Motor Speedway in Loudon, just to check it out, then drive around Concord, stop at Walmart for some groceries and come home. Well, we did check out the speedway. 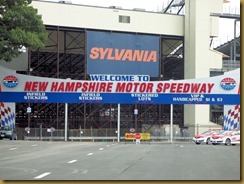 New Hampshire Motor Speedway is a one-mile flat oval that runs two Sprint Cup NASCAR races each year, usually in June and September. Usually when we go by a NASCAR track on a non-race day we just get to see it from the outside. But there was some activity going on, and we saw some open gates. Our philosophy in that situation is to drive or walk through gates until we’re told to get out. Which is what we did. 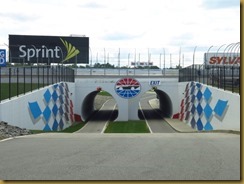 We found out there was a motorcycle racing school going on, and we were free to wander around wherever we wanted. They were in a break between practice sessions, so we got a good look at some of the race bikes. 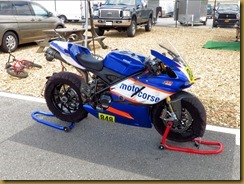 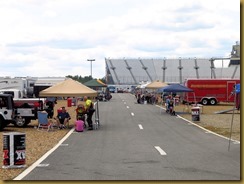 Like most NASCAR tracks, there are huge towering grandstands around most of the track. 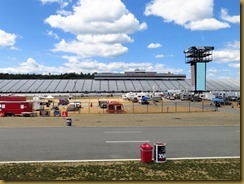 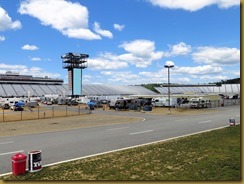 It’s a very nice facility, and looks like a great track for watching a race. Small enough to see all the action, and long enough for fast action.

We left the track and headed toward Concord, about 10 miles away. Here’s where our plans kind of changed. On the way we saw a small sign pointing the way to “Shaker Village.” We know that Shakers are a religious sect, but that’s about the extent of our knowledge of them. So we thought, “What the heck, let’s check it out.”

We made a right turn as directed and drove three miles, where s sign welcomed us to Canterbury Shaker Village. 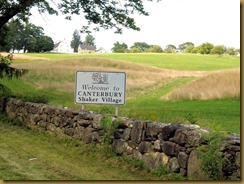 The Shakers branched off of mainline protestantism in England in the 18th century, and came to the U.S. from England back in the 1700’s to escape religious persecution. Their original name was the United Society of Believers In Christ’s Second Appearing. They called themselves “The Believers.” They got the name Shakers from their form of worship that includes free-form dancing during their services. A journalist from New York who witnessed one of their services wrote an article about them and called them “The Shaking Quakers,” which over time became the Shakers.

They lived a monastic, communitarian lifestyle apart from society. They were celibate, and the men and women lived apart and only socialized together during worship and meals. But yet they were pioneers in gender equality. In fact, most of the leaders were women. Being celibate they had to grow their religion from the outside, so they welcomed guests to their religious services, hoping they would like to join their community. They usually had many children in their communities, primarily orphans who had no other place to live. Unlike the Amish, to which they’re often compared, the Shakers embraced technology. They were always looking for more efficient ways to do things. The population of the Canterbury village peaked at 300 in the 1850’s, living in 100 buildings on 4,000 acres. They made their living from farming, selling seeds and herbs, and making and selling furniture. The Shaker religion slowly died out, and now there are only three practicing Shakers left, in a village in New York.

Canterbury Shaker Village was founded in 1792. There are over 30 buildings left in the village, many of them open to walk through. 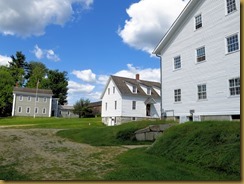 We joined a guided tour that was about an hour and a quarter long, and our tourguide was very knowledgeable about the Shaker history and lifestyle.

The oldest building in the village is the Meeting House, where their religious services were held. It was built in 1792, and believe it or not it was raised in one day. 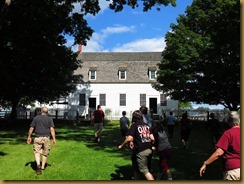 The Dwelling House is much like a modern dormitory. It’s where the residents lived, with men on one end of the building and women on the other. They had separate living rooms, but a common dining room. 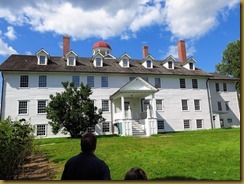 All the buildings had the same sparse architectural design. The Shakers believed in efficiency of design, with very little ornamentation or variation in style. We weren’t allowd to take photographs inside any of the buildings. Our guide said it’s because so much of the furnishings are original, and they’ve had unscrupulous people “case” the buildings by taking photographs of the artifacts, then coming back to steal them.

There was one building that let us take a couple of photos, and that’s the print shop. 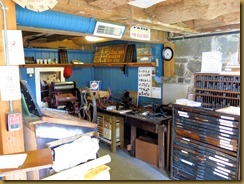 The shop is still used today to print newsletters and small tracts.

It was an enlightening few hours, and totally unexpected! If we hadn’t noticed that little blue sign we would have missed out on a great attraction. Our drive around Concord and grocery shopping will now have to wait for tomorrow.

Being at a NASCAR track is like being home.

It's wonderful how your lifestyle affords you the opportunity to take those side detours. I enjoyed your report on the Shakers today.

What a cool surprise!

What a great choice, we should be more spontaneous.