(Ft. Dix/McGuire AFB, NJ) Hi 86 Lo 71 – Rain was forecast for today, but Dee and I didn’t let that keep us from our plan, which was to see some of the historical sites in Philadelphia. Our friends Gail and Ed agreed to be our tour guides for the day.  (click on pictures to enlarge) 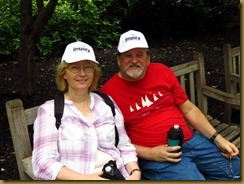 We headed out at mid-morning to the Lindenwold PATCO Station, about 40 minutes south of us, including finding our way around the detour. Ed and Gail met us there and we took the train to Market Street in downtown Philly. 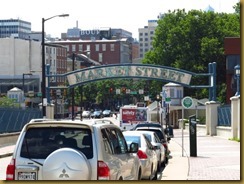 We first went to the Independence Visitors Center to get four tickets to tour Independence Hall. The tickets are free, and issued mainly for crowd control. We then walked across the street and got in line to see the Liberty Bell. 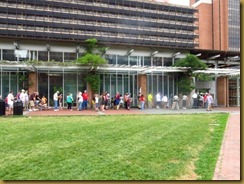 A beautiful display hall was constructed about 10 years ago and has many historical exhibits about the bell. 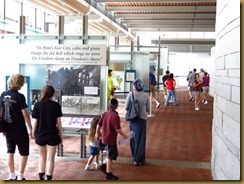 Then we got to see the bell itself, crack and all. 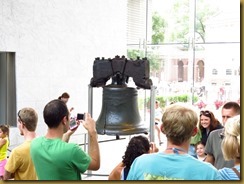 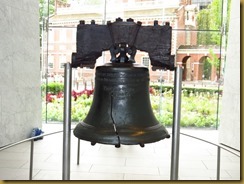 Outside the Liberty Bell exhibit hall you can see the foundation of the President’s House, which served as the White House from 1790 to 1800, when Philadelphia was the U.S. Capital. The foundation was uncovered in 2000 when they were excavating the area for the current Liberty Bell display hall. 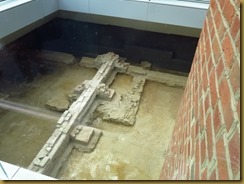 We walked around town until it was time for our tour of Independence Hall. We were very excited to see the room where George Washington presided over the signing of the Declaration of Independence in 1776, and where our forefathers crafted our Constitution in 1797. 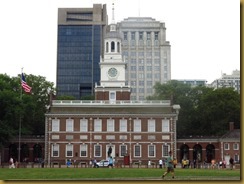 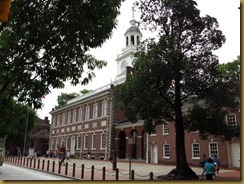 A very knowledgeable tour guide gave an informative talk about the birth of our country, then we were led into the main hall. 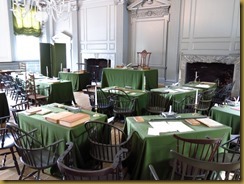 It was very humbling to be in such a historic room, knowing that George Washington sat in the very chair that sits behind the table at the front of the room. 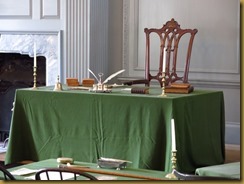 Wow… What an experience!
We were getting pretty hungry by now and ready for some lunch. Ed and Gail surprised us by treating us to lunch at City Tavern. 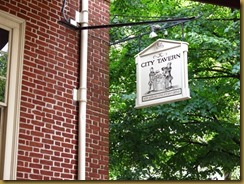 The tavern was originally built in 1773, was demolished in 1854, and rebuilt in 1975 by the National Park Service. They specialize in preparing meals as they would have been prepared in the 18th century. Dee had Wienerschnitzle, I had Beef Pie, Ed had Kielbasa and Sauerkraut, and Gail had Turkey Pot Pie. It was all made with natural ingredients, and the quality was superb! Thanks so much Ed and Gail, it was a wonderful treat.

Outside the City Tavern was this interesting historical tidbit. 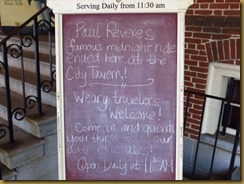 After our filling lunch we continued our walking tour by heading a few blocks east to Penn’s Landing on the Delaware River. We walked along the riverfront and admired the U.S.S. Cruiser Olympia, which was launched in 1892, making it the oldest steel ship afloat today. The Olympia served in the 1898 Spanish American War, and was decommissioned in 1922. Next to Olympia is the WWII submarine U.S.S. Becuna. The Becuna served in the pacific war in 1944-45, and continued to serve through the Cold War before it was decommissioned in 1969. 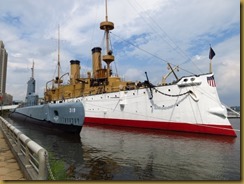 We trekked back up from the riverfront and made a stop by the Betsy Ross House. As everyone knows, Betsy Ross is credited with sewing the first stars and stripes American Flag. She had a thriving upholstery business in Philadephia at the time. 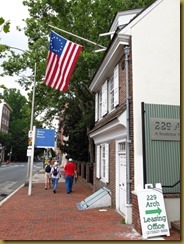 Next up was Christ Church, which was built in 1727. 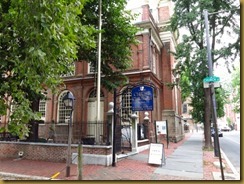 George Washington and Ben Franklin were regular attendees, and one of the guides pointed out the exact pews where they sat. 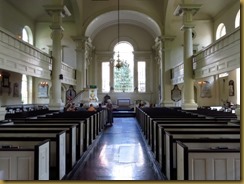 We had one more thing we wanted to see, the Christ Church Burial Ground, where Ben Franklin is buried. But we got there a little after 4pm, and it was closed.

But as we walked along, Gail noticed that Ben Franklin’s grave was right next to the fence, so we got to see it after all. The writing on the stone is a little difficult to see, but it helps if you click on the photo and enlarge it. 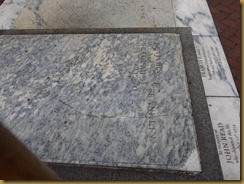 Ben Franklin is my favorite founding father, so it was very special to get to see his resting place.
We were all getting pretty tired, so we started the six-block walk to the  PATCO (subway) station.

The rain held off all day until were about three blocks from the station, when a strong shower came through. We waited it out under the overhang of a building, then hurried the rest of the way to the station and hopped on the train back to New Jersey. We said so long to Ed and Gail and came home to shower and crash for the evening.

the footsteps of Snookie . . . that cracked me up! It looks like you had a great day in Philadelphia!

Wow, things are a little different then when I was there in the 80's. I would so love to visit the city again if only it wasn't such a big city. So thanks for the great tour.