(Ft. Dix/McGuire AFB, NJ) Hi 82 Lo 63 – The base we’re on is part of a complex called Joint Base McGuire-Dix-Lakehurst. (The gates have “JB MDL” on them, which is rather obscure if you don’t know what it means). McGuire AFB is Air Force, Ft. Dix (where our RV park is located)  is Army, and Lakehurst is Navy (Naval Air Engineering Station Lakehurst). Today we drove over to the Lakehurst side to see something special.

Lakehurst was originally the home of the Navy’s Lighter Than Air Program through the 1930’s. Several hangars were constructed to house the airships, the largest being Hangar One, which still stands. 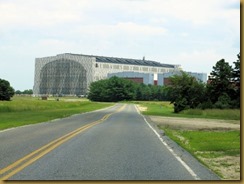 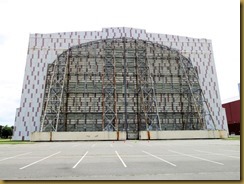 There are two huge doors on each end weighing 1,350 tons, mounted on railroad tracks. They’re counterbalanced, so it only takes 20 horsepower to move them. 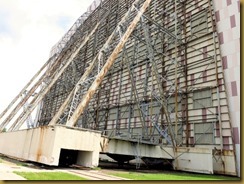 There are two smaller and more modern hangars next to it. 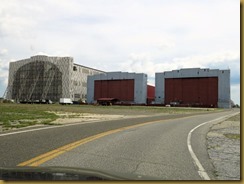 A couple of blocks away is an aircraft static display, making for a nice overall scene with the hangar in the background. 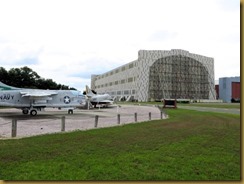 We drove all around the building, amazed at the sheer size of it. When you’re up close it really shows its age. 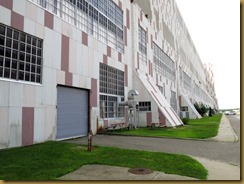 We didn’t think we’d be able to go inside it, but we noticed a small entrance to the Navy Lakehurst Heritage Center, and to our surprise it was open. It turns out it’s open only on Wednesdays and the 2nd and 4th Saturdays of each month. Boy, did we ever luck out! 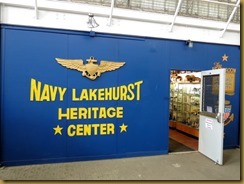 Inside was a small gift shop, and two separate exhibit rooms just crammed with models and memorabilia from all the services, covering all the wars since World War I. 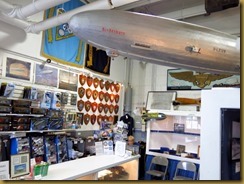 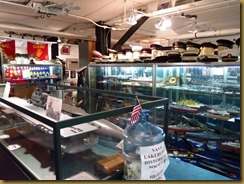 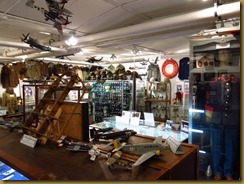 We were permitted to go inside the hangar and look around. Just inside the door was this reproduction of a gondola from a 1930’s airship. 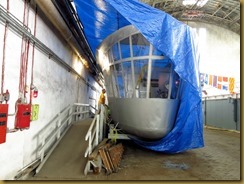 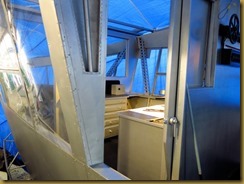 Most of the floor space inside is taken up by a large mock-up of an aircraft carrier flight deck. The Navy conducts research and training in carrier launch systems here.

This is a view of the carrier mock-up from floor level. 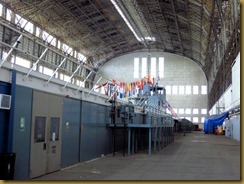 Walk up a few steps and you’re on a large portion of a full-size carrier deck. 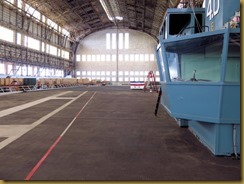 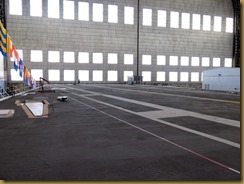 The rigid airships were pioneered by the Germans as a luxurious form of transatlantic air travel in the 20’s and 30’s (this was before modern airplane travel). The two most famous airships were the Graf Zeppelin and the Hindenburg. A few U.S. airships were built in Hangar One in the 1920’s. The Hindenburg made several visits to the U.S., landing at Lakehurst each time. But it’s final voyage on May 6, 1937 ended in disaster. It’s destination was Hangar One, and during landing it crashed and caught fire, killing 36 passengers and crewmembers. I think everyone has seen this famous photograph of the disaster. 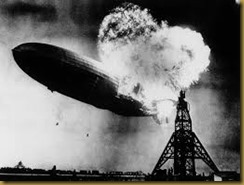 About a half mile from the hangar in the middle of a large field is a simple memorial marking the location where the Hindenburg’s gondola landed after the crash. 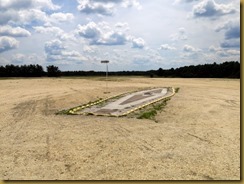 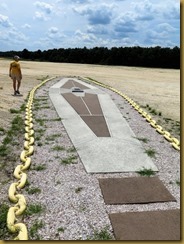 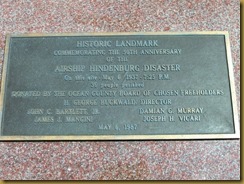 We were at first hesitant to drive the 23 miles to Lakehurst just to see a “big old hangar.” But boy are we glad we did. We saw a lot more than we thought we would, and it was a thrill to see a place where such a historical event occurred. Another wonderful memory made on our full time journey!

Great tour! We lived there for three years while I was stationed in Philly and never went:(

I never knew they had a hanger for the large air ships. Interesting and I learned something. Good post.

Having been inside those hangers, I always wondered who had to change the lightbulbs that hang up in the ceiling... :cO

You just took me somewhere I will never be in any other way... Thanks for that..

My Squadron HC-2 was in the second hanger on the right from Hanger One.This was a great base to be stationed at ,really close to the Jersey Shore.Wish I could have spent more time there, but they kept sending me out on detachments.You guys are lucky you have your retired cards, from what I was told it is tough to get on the base now.Have fun a lot to do on the Shore have you made it to Seaside heights yet? Sam & Donna...

Great info on when the heritage center is open.