(Ft Dix / McGuire AFB, NJ) Hi 81 Lo 64 -- Cloudy and rainy looking all day, but it didn't rain until late afternoon. It’s been great sightseeing and spending time with Lessie and Ed while in the area. We haven’t mentioned much about the base so thought we’d say something about where we’ve been staying. 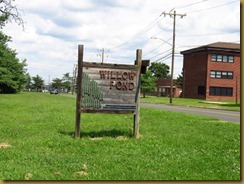 Fort Dix, established in 1917, was consolidated with two adjoining U.S. Air Force and Navy facilities to became part of Joint Base McGuire-Dix-Lakehurst (JB MDL) on 1 October 2009. However, it remains commonly known as Fort Dix today. Dix has a history of mobilizing, training and demobilizing Soldiers from as early as World War II through the present day. In 1978, the first female recruits entered basic training at Fort Dix in 1991. We learned yesterday it’s a training base for the future, with many new technologies being tested.

It’s been awhile since we’ve been on an army base. We're used to seeing different types of aircraft on Air Force bases. But here there are all kinds of vehicles, including these Humvees we saw close to our famcamp. They're full of electronic equipment, and the structure on the roof is for mounting a machine gun.

There are several tent structures like this around the base.

Different kinds of static displays greet visitors inside each gate.

One of the motor pools on base, with hundreds of Humvees and other vehicles.

The famcamp is next to a small lake.

Looking back from the lake toward the ten RV sites.

We stayed in today and the day went fast. The freezer is defrosted and the refrigerator food is secured for our trip tomorrow. Jim worked on tomorrow's route and read while I crocheted. Tomorrow we're on the move to Connecticut. It should be an interesting trip.

You had a good stay there at the that base. Now that you are moving on, be carefull on the roads.

Just for the record from a retired Army civilian, we don't have Army bases. We have post, camp, and station. The only air bases I've ever been on were Mather and McConnell, here in Sacramento; both for classes. I hated to see Mather Field shut down.

(Hope I'm not wrong on my base/post thing - my memories of those days are fading fast, so it's possible.)