(Ft. Dix/McGuire AFB, NJ) -- Hi 82 L0 61 -- Yesterday we described the first half of our drive up the New Jersey coast from Asbury Park to Sandy Hook. Today we’ll cover the rest of our trip. We reached the southern end of Sandy Hook early afternoon. Sandy Hook is a peninsula that juts out into Sandy Hook Bay across from New York City. It’s part of the Gateway National Recreation Area. 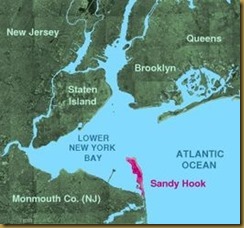 After paying our admission fee at the entrance gate ($15 per carload, but half price on my National Parks Access Pass) we pulled over at the first public beach parking area we came to and took a look around. We were greeted with a distant view of The Big Apple, with the new World Trade Center building sticking up very prominently. (Click on this and any photo to enlarge it.) 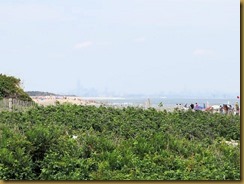 The peninsula is about five miles long with several beach areas, including Gunnison Beach, which is clothing optional. Apparently, according to one of the Park Rangers nudity is not illegal on Federal property. Who knew?

Near the northern end of Sandy Hook is the remains of Fort Hancock, an Army fort that was built in 1859 for the defense of New York Harbor. It was active up until 1974, when it was closed and is now managed by the Gateway National Recreation Area. It played a very active role in WWII, providing coastal defense for New York Harbor. The remains of the original gun batteries are interesting and a little creepy looking. 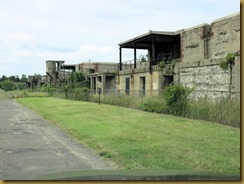 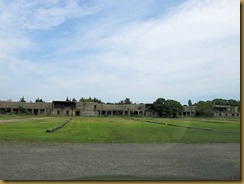 There is a more modern side of the fort. These quarters are part of “officer’s row.” 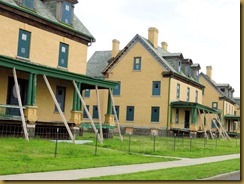 We’re not sure what this building was used for, but it sure is beautiful. 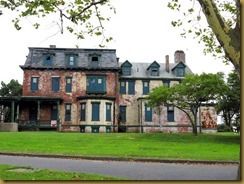 We noticed on top of the chimney was a large bird’s nest. Here’s a close up of what appears to be an Osprey perched on top of it. 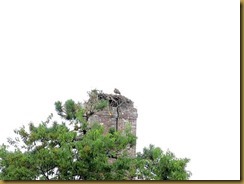 The highlight of our day was taking a tour of the Sandy Hook Lighthouse. It was built in 1764, making it the oldest operating lighthouse in the U.S. 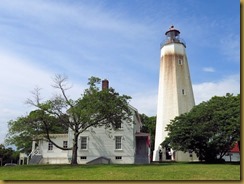 It’s hard to believe this light was active during the American Revolution. The only time the beacon was turned off was during Civil War, Spanish American War, World War I, and World War II. It’s lit the way ever since.

Here’s a unique view of the 103-foot octagonal tower. 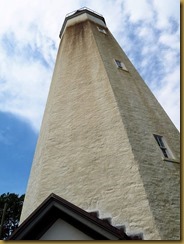 A park ranger led our small group through the entrance door to start the 95-step climb to the top. 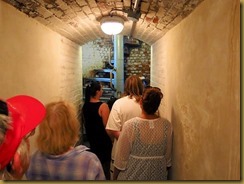 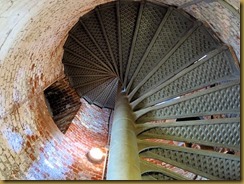 It was a workout, but we made it! We gathered inside the small lantern house, right next to the large fresnel lens. 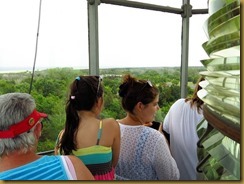 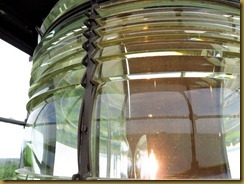 We weren’t permitted to go outside on the platform, but the view through the glass windows was pretty spectacular. NY City was even more prominent from this vantage point. Also in this view you can see the old gun batteries of Fort Hancock in the foreground. 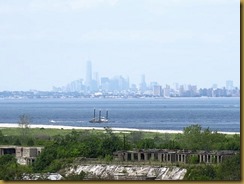 A little to the left of the city skyline is the long span of the Verrazano Narrows Bridge, which connects Staten Island with Brooklyn. 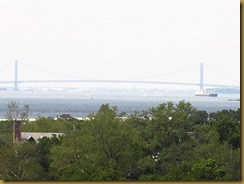 In the other direction is a great view of some of the buildings on Fort Hancock. 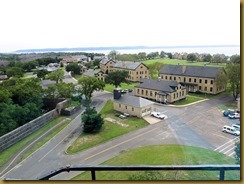 After enjoying the views we all made our way back down the spiral stairs (which was easier than going up).

As we left Sandy Hook we took a short detour to the town of Highlands to see the Twin Lights of Navesink. It was built in 1862 on a high hillside towering 250 feet over Sandy Hook Bay. Here’s a view of the building from the highway. It was a quick “grab” shot, so sorry for the quality. 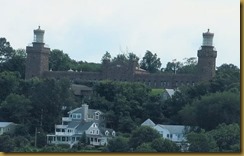 We got there a couple of minutes before 4:30, which was closing time, but we still got to take a walk around the grounds. The building is a beautiful example of 19th century architecture. Jim doesn’t have a wide enough lens on his camera to get the entire building, but here’s a “left” view and a “right” view. 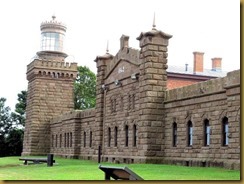 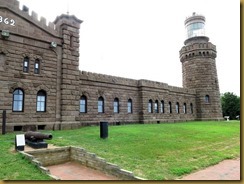 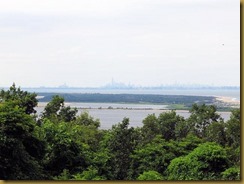 There were a couple of cannons on the grounds. Here’s Ed looking one over. 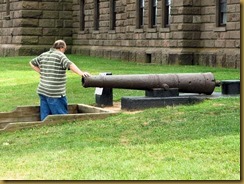 Although it was closing time a nice gentleman let us into the small exhibit room and let us spend a little time looking over the displays. He explained the workings of a fresnel lens. 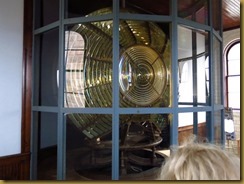 The lens uses prisms to reflect the light from a single bulb. The first use of a fresnel lens in the U.S. was in these twin lights. 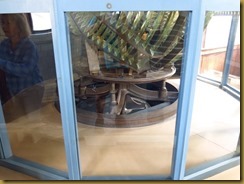 Dee, Lessie, and Ed looking over the displays. 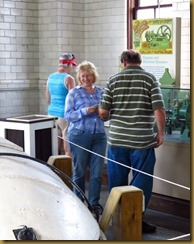 We learned another interesting fact about the Twin Lights of Navesink. In 1899 Guglielmo Marconi demonstrated the first practical use of the wireless telegraph, sending and receiving a message between operators at the Twin Lights and the ship S.S. Ponce. We're both amateur radio operators (hams), so that was interesting to us.

That ended our day of sightseeing. We headed home, making a dinner stop at a Chinese Restaurant on the way. We were all pretty bushed.

Today Dee drove by herself to Lessie’s for a girl’s antique shopping day out. I stayed behind to run some personal errands and finish up this blog. We’ve had a very enjoyable stay so far here in New Jersey.

My kids still call that area home..... We loved it there!

As always, a wonderful picture tour and narration. From another ham, WB3DZY. The DZY part is why I have the nickname, Dizzy.

Wonder how many trips a day that Park Ranger makes up those stairs?