What Day is It?

(Avon Park, FL) Hi 69 Lo 46 -- It was on the chilly side this morning, but it warmed up fast! When I woke up I wondered what day it was. We're both doing that lately. Normally we wouldn't care, but we need to know because every day has something different to do, and some we just don't want to miss. Judy found a clock the other day that would be quite handy for our situation. 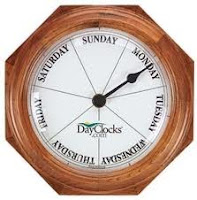 The first thing was shuffleboard at 10am. I dressed warmly and played till 11:30, then went home for lunch. We made sure it was Wednesday and went to the Bible Study class. It's a great group and we're still learning names of everyone. It's great to pick and choose what you want to do here but if you want to stay busy there's something going on all the time. They've even added couples dance lessons in the afternoons.

After bible study was over Jim went for his first long walk since he got over his cold/flu. He took that opportunity to move his truck to another part of the park. This Sunday is the big classic car show and they'll be taking up all the parking spaces around pool where we (and others) keep our truck. While he was moving the truck he drove it by our site and took out his ladder from the truck bed. When he got back he used it to wash the outside windows. While all this was going on I made some brownies. I wanted to reacquaint myself with the convection oven. It's been awhile since I've used it. The brownies turned out yummy.

At 4:15 we went over to the clubhouse for a spaghetti dinner. There were over 150 there for spaghetti, roll, and salad. And for dessert was ice cream and biscotti. It was a great meal and again we met more people.

Many new RV's are starting to come in for this Sunday's car show. This is an unusual car trailer. 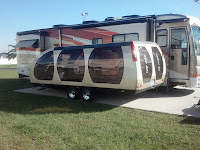 The windows are to show off the car that's carried inside. 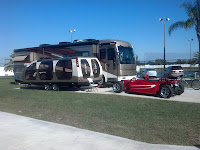 It's a street legal indy car. First time we've ever seen one of these. It's got a really low rumble when it starts. 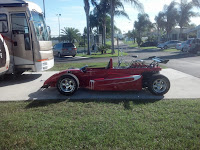 We stayed in tonight and watched TV and I crocheted and joined in the chat room. A quiet evening.

What a cool car and trailer. How fun!

When I bought a new digital clock for the fiver, I was happy to find one that had inside/outside temp, and the date and day of the week. I find myself looking at it to see what day it is almost as often as I do to see the time! :)

Cute clock! We need one of those!