(Beaufort, NC) Hi 79 Lo 57 -- A Sunday with no race to watch, so we had to find some other things to do. We had breakfast then called my mom and sis on Yahoo video chat. I carried my laptop around and showed them the area, the house, the water, and then chatted awhile. We love doing that, and Sharon had never seen it done.

After a bit of lunch Sharon and I went geocaching. There's several located within five miles of here. We used my Droid Razr smart phone (app is called c:geo) to download the coordinates and then have it lead us right to them using the built-in GPS and Google Maps. We looked for six and found three. One that we found was at the foot of the bridge that goes from Morehead City to Atlantic Beach. A fisherman was there and helped us look. He actually found the cache, and was thinking there was money to be found. He was disappointed when it was only a piece of paper to sign. :) 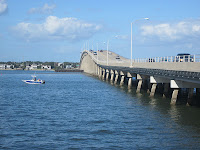 This is the guy that found the cache, then went back ro fishing. 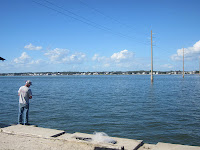 There was a cache somewhere in this area, but we didn't find it. 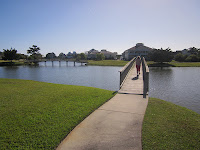 It was several hours before we got back home. While we were gone Jimmy (Sharon's boyfriend) had made a veggie dinner of black-eyed peas, potatoes, fried okra, and cornbread. It sure was good!

We went back to the RV and, every now and then we'd feel an ant on us. I went outside to see where they might be getting in and found them all over the electric cord and inside the storage area where we keep our hoses. They were also in the utility compartment. There were hundreds of them, so I got out the bottle of Home Defense spray and gave them a bath. Jim saw a few inside in the corner of the living room so he sprayed all along the edge of the carpet where it meets the wall. I hope we got them under control. Now I'll set out some cornmeal and the other products to keep them them out of the RV.

The rest of the evening was keeping cool till the sun went down and watching our regular Sunday shows.

The geocaching sounds like a lot more fun than fighting the ants. Sure hope you won that battle.

Sprinkling some Comet or Ajax around your wheels and jacks will stop them, they don't like to walk on it. It does something to their feet. I sprinkle it all around the feral cat trap to stop them from eating the bait food. It sure keeps them away from it.

Then, I use cornmeal or grits on the mounds.

I hope you have got them banished from the inside now.

I don't like ants in the house at all. Sacramento seems to have more than its share, but I think it's probably where recent construction has disturbed the earth. I spray to kill.