(Mansfield, TX)  Hi 102 Lo 77 – Today it was hot, hot hot! It’s been very nice in Texas with temps in the hi 80’s and low 90’s, but today the heat came back. Today we went to see the famous Fort Worth Stockyards. The Stockyards is a four square block area just north of downtown Fort Worth that has transformed over the years to a rather touristy shopping/eating/night club hot spot. All we knew before going there was, if you’re in Fort Worth you should see it.

We left a little earlier than usual to try to beat the afternoon heat. Fort Worth is Dallas’s little brother city about 30 miles away. Dallas is large, modern, glitzy, and cosmopolitan, whereas Fort Worth is about half the size, and all about the Texas cowboy culture. (Click on photos to enlarge them.) 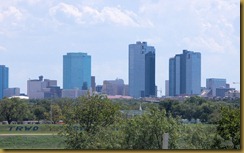 The Stockyards area is just the right size for walking around. 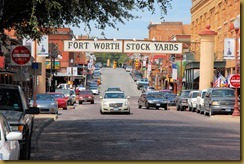 Horse riders were right at home sharing the streets with the cars. 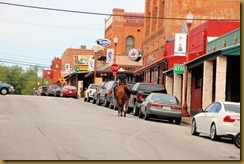 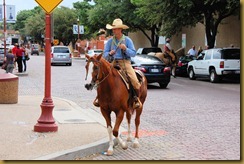 Even the police were on horseback. 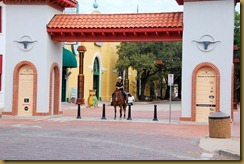 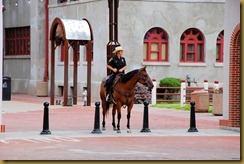 They have a rodeo every Friday and Saturday night, and other wild west-themed shows, at the Cowtown coliseum. 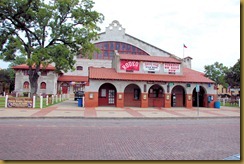 This neat looking sculpture is right next to it. 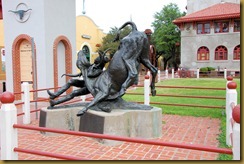 The Stockyards Exchange. They still have livestock auctions here every week. 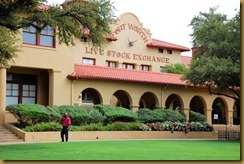 We didn’t go inside the Stockyards Hotel, but it looks like the kind of place that would take you back to the old days. 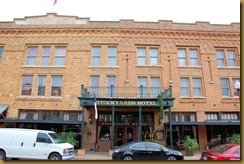 A place like Fort Worth just has to have a “Texas Cadillac.” 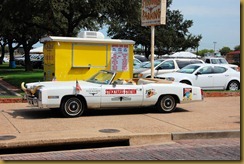 Stockyards Station is the main shopping center, with lots of souvenir shops and a few eating places. We had lunch at a BBQ joint here. 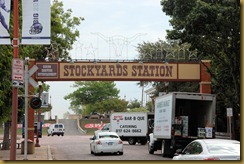 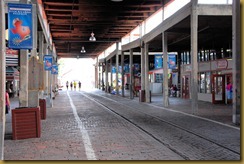 The big show of the day is the twice-daily “cattle drive.” At 11:30am and 4:00pm every day they herd a bunch of longhorn steers down Exchange Street through the middle of the stockyards. We joined the crowd on the side of the street to enjoy the show. 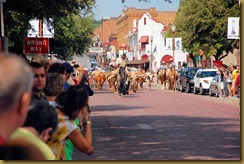 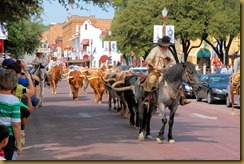 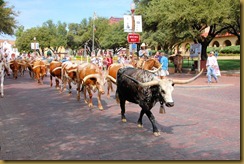 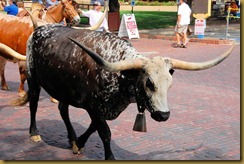 It was well worth seeing the Fort Worth Stockyards. Sure, it’s a little “touristy,” but we still got the feeling that these cowboys were real, and they take their western heritage and lifestyle very seriously. Just look at this guy… 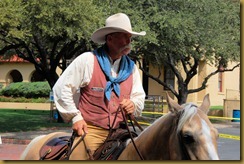 That’s a real cowboy right there! (He kind of looks like Sam Elliott, one of my favorite western actors.)

I’ll bet you’re wondering what the “BEP is in the title of today’s blog. We left the Stockyards area and proceeded north on I-35W for about another 10 miles or so to the Bureau of Engraving and Printing (BEP). Until I came across this on the internet I never knew that Fort Worth had one of the two places in the U.S. that prints our paper money (the other being in Washington, DC). The BEP is a well-secured building in the rural countryside north of Fort Worth. We weren't allowed to take anything electronic into the facility, including cameras or cell phones. so these are the only photos we were able to take. 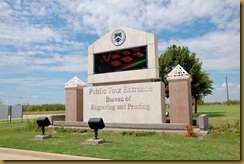 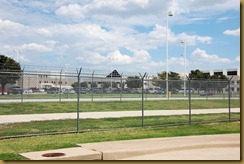 We enjoyed a very interesting and informative one-hour tour of the facility, and got to see a LOT of money being printed. It was amazing watching sheet after sheet of $100 bills (32 bills per sheet) rolling off the printing machines. We were led through the four-step process of printing money, and got to see hundreds of pallets containing millions of dollars. The BEP gets their printing orders once per year from the Dept. of the Treasury, and they print primarily replacement bills for money that’s destroyed during the preceding year. This year they’re printing about 58,000,000 notes comprising about $580,000,000 per day. It was quite an experience, and something that's not really advertised. If you’re ever in the Dallas/Fort Worth area it's worth checking out.

We fought our way home through the horrible Fort Worth traffic, and immediately fired up our second air conditioner. When it gets higher than the low 90’s it’s hard for our main air conditioner to keep us cool. But when we turn on the bedroom a/c to help out, it gets real cool real fast.

No free samples? Of the money, not the cow pies...