(Mansfield, TX)  Hi 96 Lo 77 – Around 11am this morning we headed to TGI Friday’s in Arlington to have lunch with Cait, one of our blog readers. Cait lives here in the Dallas area and works in the IT department of a small company. She’s looking forward to someday buying a small RV and doing her current job remotely while traveling the country. We had a nice lunch and a couple of hours of good conversation. Good luck Cait, hope you realize your dream real soon! 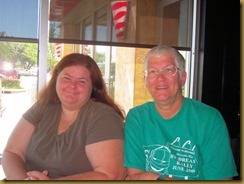 At around 1:15 we bid Cait a warm goodbye and drove a few blocks to the Dallas Cowboys Stadium. (Click on photos to enlarge them.) 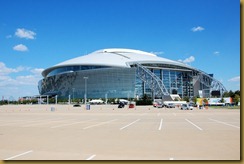 It’s the largest stadium in the NFL (80,000 seats, plus standing room for 20,000), and is a very imposing sight as you get near it. A couple of days ago I bought two tickets online for a VIP tour, which was scheduled for 2pm today. I’m sure glad I bought them ahead of time as they were completely sold out of all tours today. There are a lot of fans in town for this Saturday’s Michigan vs. Alabama “Kickoff Classic,” and many of them were taking stadium tours today. When I got in line to pick up my tickets at will call, I overheard a couple buying tickets for the game. The game is almost sold out, but they got two folding chair seats on the wheelchair platform for a total of a little over $600. Yikes! For a college game?!

We got our tickets and reported at the Pro Shop and waited for the tour to start. To call this stadium fancy is really an understatement. We toured Green Bay’s Lambeau Field and Denver’s Bronco Stadium during the past year, and they’re very nice. But Cowboys Stadium is completely different level of opulence! I was looking forward to seeing the famous giant video screen that hangs over the field. I knew it was big (180 ft x 70 ft), but when I first saw it my jaw really dropped! 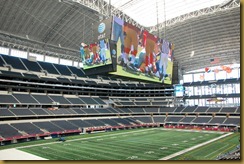 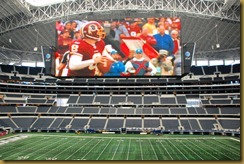 Now THAT’s a big screen! They were showing football highlights and promos, and the picture is crystal clear. There are two smaller screens facing the end zones. 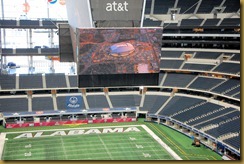 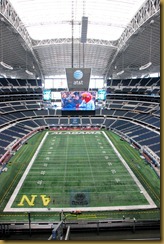 Two things to point out in the photo above. For this Saturday night's game Alabama is painted on the far end zone, and they were in the process of painting Michigan on the near end zone. And note the translucent roof. It’s actually covered with a very thick mylar material, and it can be opened up in minutes. The big glass doors on both ends of the stadium can also be opened, offering an “open air” configuration.

We got to go inside one of the luxury suites (over 300 of them in the whole stadium), and the Dallas Cheerleaders locker room. 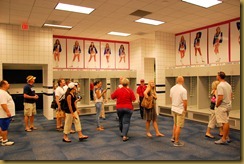 Instead of traditional “lockers”, each space is a vanity.
We also got to go into the Cowboys locker room. 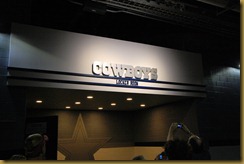 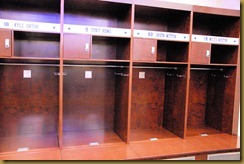 It was pointed out that the wood to build the lockers is imported from some African country. Of course it is… 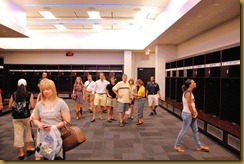 We got to field level for another perspective of everything. 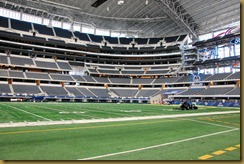 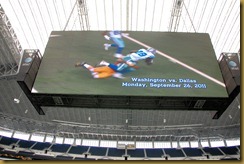 While at the club level we were amused by what was showing on the big screen. It was the world’s biggest X-Box game. Somewhere there were two people at the controls playing Alabama vs. Michigan. Boy, our grandkids would love this! 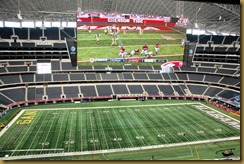 While walking around the undersides of the stadium we noticed the ESPN production trucks getting set up for Saturday night’s game. We had a great time. It’s a beautiful facility, and I only wish it were the Dolphins’ stadium instead of the Cowboys’. :) 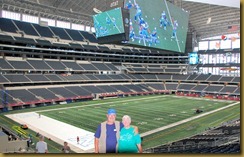 I'm a die-hard Cowboys fan, and I'm glad to see that you really liked the stadium. I've never been to a game there or toured the place. I went to a Home & Garden show there one time but I didn't get to see the big screen in action. Perhaps I will one day but truthfully, I enjoying watching my football from the couch at home.

Great shots! I like the stadium ..Can't wait to attend their game in Arlington