(Seffner, FL) - After another night in the service bay at Lazy Days, we again had to get up and out of the RV by 8:00am.  I couldn't wake up today and felt real druggy and spacey. The early hours are getting to me.  We went to Cracker Barrel again for breakfast.  We each had a new dish they're doing for Christmas season, Cinnamon Pancakes (me) and Cinnamon French Toast (Jim). It's so good, but very rich.

This is our seats for the past 3 days 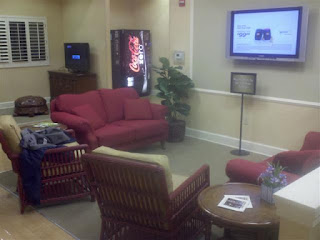 They were supposed to be done and have us out by lunch, then it was 12:30, then it was 2:00, then it was 3:30, which is the latest we want to leave in order to get back to Wauchula before dark. They finally finished up and we signed all the papers at 5:20.  So it's one more night in the service bay, but now we can hitch up and leave after breakfast in the morning.

This is what we had done:
-  Took care of the Norcold refrigerator recall.  (Installed a temp sensor)
-  Re-taped and sealed the front and end cap seams on the roof.  (The tape was curling up)
-  Replaced several screws along the front around the kingpin with larger screws.  (Carriage used aluminum screws and over-tightened many of them, and they kept loosening up or the heads broke off)
-  Replaced some brackets on the rear ladder that were broken.
-  Brake service and re-packed the wheel bearings.
-  Ordered new hinges for the bathroom door.  (It's been out of alignment and hard to close)
-  Ordered new freezer door.  (The seal on the old one was loose, causing frost build up just inside the door.  Amazingly, Norcold is sending a complete door rather than just a seal.  No wonder those fridges cost many thousands of dollars!)

Some of these are things Jim could do himself, but hey... we were here, so why not let the professionals do it.  Plus if it's done wrong, then the warranty wouldn't be good for next year. We're halfway through our two-year warranty, so this was a good time to have all these little things taken care of.  We're very happy to now have a home that's in tip-top shape.  These were all relatively minor things, so we really can't complain about the reliability of our Cameo.

Believe it or not we're not upset that what we thought would take a day or so ended up taking three days.  The time went by quickly and it was fun meeting and talking to new people.  Judy, the solo gal that was here yesterday was with us again today, and we met another couple, Mel and Beth from Montana, who are not full time yet but hope to be someday.  Mel is retired USAF like Jim, so we talked about famcamps and some of the military bases we've been.

We had a good time, but Jim is ready to get going.  I"m fine because I like meeting everyone.  We didn't walk around much today, we never took the time.  It's still cold, but not as cold as the past two days.  Tonight will be the last cold night for awhile. A warming trend starts tomorrow.

We had some leftovers for dinner.  We can't get the Tampa CBS station on our rooftop antenna, so I'm walking over to the service dept waiting area to watch Survivor on one of their TVs.  I've never missed an episode of Survivor, and I don't intent to miss tonight's.  :)  Tomorrow it's back to Wauchula and our winter place in paradise.

You are fortunate they replaced the entire door on your freezer. My 5ver was, of course, out of warranty when I had problems. It cost me about $350 for a repair kit that never worked, and the repairman had to come back and use a type of glue to hold the gasket in place. The gasket was always slipping and wasn't right when I sold the 5ver. I really don't like RV refrigerators at all. The range and oven is ok, but the fridge is crap as far as I'm concerned, especially for what they cost.

Good that the work list is completed and hopefully there will be no new items for awhile.

Have a good trip back.

I'm with you on Survivor. We don't like to miss it either and last night was a good one!

Glad you got your repairs completed and can get back home!

i hope jim got some pointers on the repairs so as he can handle it when the warrenty is gone. no warrenty = $ BIG.BUCKS. dom.