(Wauchula, FL) – I got up earlier then normal to get the day going. Jim was going to the dentist but before he went he wanted to get the laundry done. I wanted the sheets washed and forgot to take them off last night.
He left for the laundry room here in the park, I did bills and did my walk around the park.  I  came back and started getting caught up on the blogs.  I read quite a few before Jim got back.  We had lunch then he left for his dentist appointment and I went to the join the 2pm shuffleboard group.  A couple of new people joined us the last couple days, and they play just as good as the others.  I talked to one neighbor who wants to learn how to play but doesn't feel comfortable playing with the group.  We’re going to set up a time to join them for some practice, just the four of us.  I’m noticing by playing my hip and knee haven’t hurt as much. There’s some good coming out of it.

We have a new neighbor two sites down from us in a fifth wheel. They’re from Michigan and have been coming here for the past five winters. There should be more people coming in the next couple of weeks, then the majority will arrive after Christmas.


I wanted to say thank you to my hubby.  We sometimes don’t give our spouses enough credit for what they do.  I’m lucky to have someone that can put up with me and it’s been so fun being with him in the RV. He has courage to climb up on the roof to wash it off and check for leaks or damage from tree branches.

Believe it or not he does windows a whole lot better than I do, leaving no streaks.

I fix meals and he does the dishes.  If he grills dinner I do the dishes. 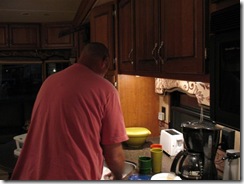 He does the laundry.  He's comfortable at laundromats; he takes his Kindle and reads while waiting.  Years ago (many years ago!) he decided he didn’t like the way I folded the clothes, so he's done it ever since.

At the end of the day, I let him take a nap.

Thank you Jim, for making my life as close to paradise as it can be on the road in our little house on wheels.

What a nice tribute to your husband! It sounds like you two have it all worked out for life in the small space of an rv.

aww how nice..what a nice blog...and cudos to Jim for being such a good 'life mate'....Rick and I are the same ~If I cook he does dishes and if he cooks I do dishes...we both do the laundry..and we both make the bed...and clean the rig together...isn't it wonderful to be travelling with your very best friend!! People say to me how in heavens are you going to travel together in that rig 24/7..I say no problem hes my best friend and soul mate..and we've been together 24/7 for the last 13 years...and we wouldn't have it any other way..hope Jim made out well at the dentist...hugs

what a nice tribute to your 'best friend'!!..and it is nice that he does windows, dishes and laundry!!

Hi Dee & Jim, Great tribute to your "your best friend". Mine is the same with the laundry and windows, I thought maybe the military taught them well. Happy travels. Becki & J.D.