Tick-Tock; It’s All About TIME

(York, PA) –  This morning, after our normal routine of breakfast, blogs, and emails, we headed to nearby Columbia to visit the National Clock & Watch Museum.  The traffic through York was bumper to bumper due to a Harley-Davidson festival in town this weekend.  We passed this long line of Harleys going in the other direction.  The line was at least a half mile long!

The Watch & Clock Museum is one of the reasons we wanted to come to this area.  Jim is really into wristwatches, and I'm into clocks.  The small town of Columbia is very charming, with New England style architecture on most of the buildings.  With the help of our GPS we arrived at the museum. 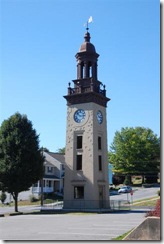 This place is a dream for us both. There’s so much information and so many clocks and watches that we were there several hours.  Pictures tell it all. Here’s a few of our favorites. (Click on any photo to enlarge.)

A clock shop set up as if it was in the 1800’s, even with the sounds of horses going by.

This clock was just plain fascinating.  It had little balls that would roll down ramps like a pachinko machine, and a turning wheel that would move the gears.

This one was called the 8th wonder of the world.  A man named Engle spent 20 years to build it.  A member of the museum staff demonstrates it.  On the quarter hours and at the top of the hour it performs various shows, mainly religious-based.  There's Jesus and the 12 disciples that go marching from one door to another, the devil makes an appearance, and various other things, all while a built-in pipe organ plays music.  Amazing clock.

Many, many pocket watches 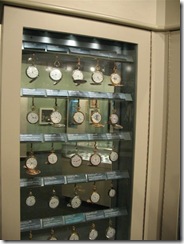 The special exhibit that Jim was looking forward to is called, "Watches, James Bond Watches."  Jim is a huge James Bond fan and he heard about this exhibit months ago.  The exhibit had examples of all the watches that were worn by James Bond and other characters in the Bond movies.

We would have stayed longer but we were both hungry. We found a neat little local restaurant down the road and had some lunch.  After we got hom did the laundry.  We were both running out of clothes. It’s been awhile.

This day was what full timing is all about.  Something we read about, wanted to see, and arranged our travel plans to make it happen.  We haven't mentioned it lately, but we love this lifestyle!  :)

Awesome collection of clocks and watches. I didn't even know there was such a place!

Reminds me of the old-timey song, "Grandfather's Clock".

Wonderful! That place is going on my Bucket List when we head to PA next summer.

in all the times i've been to york, i didnt know about that place either. too bad i didnt know about jims affliction with time pieces when we met up in ill. in june. i passed a pocket watch on to my niece to give to my great nephew that was my dads. he got it from old man kellog (of the cereal family) that pocketwatch's hands were all scroll work, it originally came from hamburg,germany; & we did find some dates inside it next to the watchmakers mark- dated inthe middle to late 1800's .dom...

Another place to add to our "Life List" as well.

Are they all running? If so, does all the noise drive you mad? Can you imagine if they are all running?

I don't think I've ever heard about that place! York is only a couple hours from my house. Geez :) George loves watches too. He has too many to get rid of when we full time :)

Headline should have been, "Time is more than just a magazine."