(York, PA) – We have a routine down now that we can get up at 8:00 and leave by 10:00.   Neither of us like to travel long distances so leaving at 10 we usually get to our destination by 2:00.   It was a beautiful trip across southern Pennsylvania and the trees are just starting to turn colors.

I took a few pictures along the way.  It was a very hot and humid day and it’s noticeable in the pictures. It’s like a haze everywhere you looked. 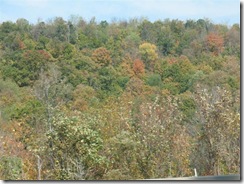 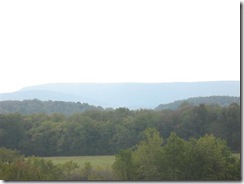 Somerset, PA, this was laid out so neat, I just had to take a picture of it.

To me these are mountains. I’m from the flat lands of the Midwest.  I’ve seen the mountains out west, but for driving I’ll take these any day.  Neither one of us had any problems driving today. 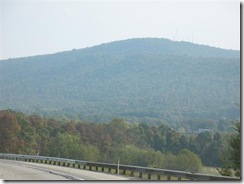 I liked the little road going up and over this hill. 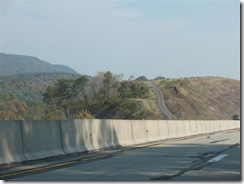 We arrived at Ben Franklin RV Park in York around 2:30.  It's a very small park that's being converted from a mobile home park to an RV park.  The park owner is very helpful and gave us lots of information about the area.  It turns out he went to school at Grace College in Winona Lake, IN where I’m from.  Mom lived right across the street from the college.  The only reason I mention it is because it’s another example of this being a small world.

I learned this evening on Facebook that a good friend of ours, Byron King, has died back in NC.  He was killed on his way to work this morning when a deer ran in front of his motorcycle.  You just never know when your life will be taken.  It’s quite a shock.

One little annoyance we have in this area is stink bugs.  They're those little flying beetles, and they're all over the place  They covered the left side of our home (only the left side... strange).  Jim had to sweep them off the side with our long-handled broom.  Reminds me of the love bugs in Florida.  A few got into the rig, but we're hoping they got in when Jim had the door open for about 10 minutes while we were setting up.  They should disappear at the first frost, or that’s what they’re saying on the news.

I’ll get pictures of the park tomorrow.  You have to be fully self contained to be here.  There’s no bathhouse, but there is full hookups.

I want to mention the list to the right of the blog has parks that we've been too. It's in excel, if you're having trouble getting it to open and you have the excel program, let me know.

Sounds like how we like to travel, just a few hours a day. We usually start by 8am and get to our destination around noon or 2 by the latest. We like taking the time to enjoy the drive and the park we stay. Enjoy your travels!

So sorry for your loss...it's always harder when it comes so suddenly.

We are just south of you by less than 2 hours and we too have been inundated by those stink bugs. Somehow a bunch got inside yesterday afternoon. I must have plucked 3 dozen of em or more by night fall. Yea, they will be gone by 1st frost but they may be hidden in nooks and cranys in the Rv and show up again when we are in warm weather...yuk!

Thanks for sharing your campground information. Reports from someone who has actually used a camp is very useful. I very much enjoy your blog

Did u know they eat stink bugs in Laos? It's a delicacy! ewww

Any bugs in your RV would be awful. I don't know about stink bugs. Do they have them in California?
Thanks for the Parks list. I tried last time and it denied me permission. Today I was able to get in, and will check them out when I'm in the areas you've visited. Some day - 2012 :)
Barbara