(Dayton, OH) – We both got up really late, it was only a couple hours before lunch so I made a couple pancakes and called it brunch.

I had a list of stuff to catch up on.  The first was to get our recent photos in order and put the best on Facebook.  That done, I backed up all the photos on our external hard drive.  I made a DVD of photos for my sister of all the stuff we did while we were with her. I was way behind.

Jim loaded software on his new laptop, and we both worked on throwing out old software that was years old and very obsolete.  We walked around the park a bit.  It’s small, so that didn’t take long.  We’ll go to the other side where the lake is tomorrow.

This little fella was at the Escapade last week.  We saw it just down the road from us.  We like the name on it. (Double-click on photo to enlarge it.) 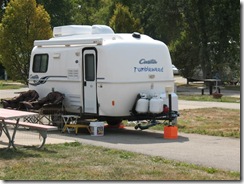 The bathhouse, which is really nice. 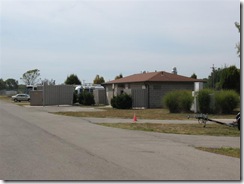 It was cloudy but didn’t rain so we took a chance in grilling some chicken.  One thing we noticed is the heat.  We’ve got the A/C back on again.  The temperature was 72 in Goshen and it was 82 here. We’re not that far away, but sure makes a difference.

Jim is a big Miami Dolphins fan, so he had to record the Miami vs Minnesota game and so we could watch the NASCAR race.  He normally doesn’t watch much football, but that’s his team and they happened to be on TV.  They won, so he's a happy man.

It was a great day for catching up on stuff.  Tomorrow we're going to the National Museum of the United States Air Force.  We spent 26 years in the Air Force and never got to see the museum.  Should be fun.

The museum is fantastic, plan on 2days, there are actually 2 areas to see.
Hugs

Yep even for a Navy Flyer the Museum was awesome, 2 days will hardly do it unless you walk fast. it is huge and everywhere you turn you say wow this great. be safe out there. Sam & Donna.

Gosh that little Casita is so cute! by the time the roof had an air conditioner and a vent on it, there isn't any more room! LOL

I would love one of those, but where would I put all my STUFF????