(Dayton, OH) – We weren’t in any hurry to leave this morning.  We were going to Wright-Patterson AFB, in Dayton, OH and they were hosting the U.S. Air Force Marathon today so they advised us to arrive after 2:00.  On the weekends there’s only one gate open so we knew there would be a lot of traffic.  The trip was 200 miles, mostly on two-lane back roads.


We got on the road at 10:20, and had no problems getting through the towns along the way.  When we got to Decatur, IN our directions from Google Maps routed us off US 33 and through some side streets, then back onto US 33, in order to save a short distance.  While we were taking this "shortcut" we came to a railroad track with the gates down and a freight train going slowly by.

This train went slowly forward and backward, forward and backward, forward and backward...  We couldn't figure out what was going on.  Jim thought that maybe they were filling the cars from the large tanks that were next to the tracks.  People were turning around and going different directions.  After about 20 minutes of this Jim stopped a truck driver who was coming out of the rail yard to ask him how much longer it would be.  He said it's been going on for two hours so far, and advised us to go back to where we turned off of US 33 and just go straight.  There was a side road behind me so I guided Jim BACKWARDS  into that road so he could turn around.  There wasn’t much traffic, and those that did come that way turned around too.  He did a great job and we went on our merry way.  LESSON: If the directions on Google maps makes you turn all kinds of ways to get to the same road you were on,  go straight.  Sometimes it's not worth the hassle to save a mile or two.

As we were going down the road there was a long line of horse wagons, and young men on horses directing traffic.  It looked like a parade of some sort.  I got a quick photo from the car as they were riding off in the distance.

I keep wanting to get pictures of these buildings.  They're salt storage buildings.  You only see them where there’s lots of snow.  This is the time of year they're busy filling them with salt.  We don’t see these down South.

We found a little drive-in diner on a corner just as we got into Ohio that had a big parking lot so when Jim saw it he said over the radio, "Let's have lunch" and turned in.  It’s good to always keep your eyes open for quick eating stops.

We noticed the little towns all the way to Dayton had empty stores and several empty houses.  It's sad to see so many small towns withering away.  Since this was our first extended trip on back roads, we were quite surprised.  I’m sure others have noticed it.

We got to Dayton and onto the base at 4:00.  The office closes at 4:30 so we made it with time to spare.  Our site is really nice.  We had heard it’s a great place and they were right.  The sites aren’t too close together and we got one of the several available pull throughs. 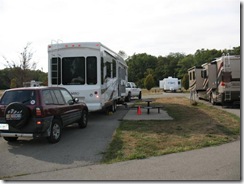 Looking out our right side

and looking out the back window. 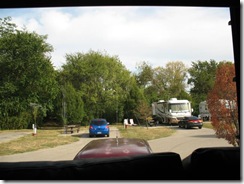 We’re going to get rested up tomorrow.  We’ll walk around the place and get pictures, then on Monday - and maybe also Tuesday - we’re going to the Air Force Museum.  We plan to leave on Wednesday.


There’s just no words to describe how much fun we’re having!

Be sure and go see the president's planes over in the hangar on the main runway. Since you have access to the entire base, you won't have to ride the blue buses over there. You can just drive yourself.

It is a very handy campground. We enjoyed our stay there and spent nearly a whole day at the museum.

that museum is really big we were there, did that. you will enjoy the place.

Don't you just love rural America...they may be down, but I will bet they will be back! Glad you had an easy turn around....at the tracks...just never know where those country roads will lead you...LOL!

Glad you guys are all settled in your new digs!

We have those humungous salt dome buildings all over here. And our cars and trucks show the results of all that danged salt used on Wisconsin roads. Some areas now are testing with beet juice solution that doesn't harm the roads, the vehicles or the water table. Neato!