Pulling Out of a Tight Space - Big Foot System

(Millersburg, IN) - Jim fooled me this morning by setting the alarm for 7:00am and not telling me.  I slept good, so that's proof I shouldn't know when we're getting up because I "wait" for the alarm.  It was on the cool side but we got the RV ready to go in two hours.  After lots of hugs with the neighbors we headed down the road.  Pulling out was a real challenge because there wasn't much room in front of our home to back the truck up to the hitch.  Jim had to back up to it at an angle, dodging other rigs as he swung the truck around.  It went well, but count it as another notch in the "experience" belt.

Before we left I picked up an aerial photo of the rally, which I'll get scanned this weekend.  It's a very good picture of the fairgrounds and shows all the rigs.

We had a short trip today to White Pigeon, MI to Quadra Mfg., the makers of the Big Foot leveling system which we have.  Our rear legs wouldn't go up unless we pushed the "Emergency Retract" button.  It was only a half hour away and we got there a little before 10am. 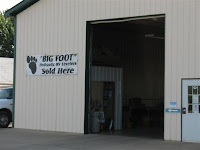 Rick met us with a warm greeting and got right to work on replacing the limiter switches in each of the rear legs. 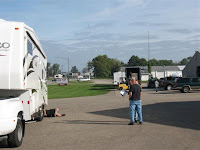 We told him that we sometimes have to tweak the system to get our rig completely level, so he had us un-hitch and re-calibrated the whole system.  It now works a lot better and our home is perfectly level after our set up.  Everything was covered by the warranty.  Very good company and super customer service.

We then headed back to Millersburg, IN to the Carriage factory courtesy park.  It's a campground they have behind the factory for carriage owners.  It's free, and there were already several rigs parked when we got there.  By evening the park was completely full.  It's really nice.  All paved, full hookups with 50amp electric.  It's kind of strange to see nothing but Carriages in one park. 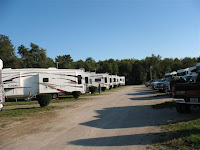 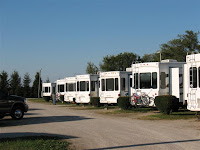 During the trip today we went by many Amish farms with horses grazing in the fields.  These were some of the nicer scenes. 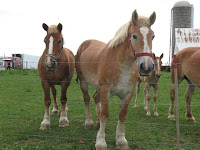 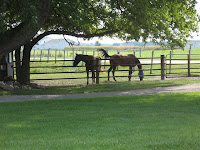 A few weeks ago I wrote about Jim's computer acting up.  It hasn't gotten any better and this afternoon it lost the ability to connect to the internet.  So we headed to Walmart and he bought a new HP laptop.  He's working on reloading his programs on it tonight. While we were at Walmart, I picked up a few groceries.  We don't need much, I only fixed one meal last week.

We got back to the RV and a neighbor Jim had met earlier came over to tell me about their recent three-month trip to the Canadian Maritime provinces, Newfoundland and Nova Scotia.  What are the chances that we're considering a trip to that area next summer, and we have two neighbors in the last month who just got back from there?  I think that's an omen that we're supposed to go next summer for sure.

We're doing nothing this evening.  We've had a very busy week and it's nice to sit back and do nothing for a change.  Tomorrow we head to Dayton, OH. We'll be on the move, follow along.

Good customer service can be a rariety. Glad you found some.

Yep, I'll be following along with you folks to your next location.

Safe travels to you and enjoy the view!

Good to see your levelers were fixed and you guys are road ready again, We will be following your trip to Florida, Don't know if we will make it down for a few weeks this winter, with Sam having to spend a month or more in PA. He is not looking forward to cold and snow again as we were hoping the house would sell and we would be heading south, Oct 1st he said he will put the plow blade back on John Deere. Be safe out there. Sam & Donna.

I talked to Gordon about things to see in Dayton - he mentioned Carrillon Bells, Hocking Hills State Park (2 hrs east) is beautiful he says. There's a skyline view along the Great Miami River that's nice, Cox Arboretum is pretty and free (Gordon's son was married there). Overall there's not much to see there.

It will be interesting to see the aerial shot of the rally and you will have to find and mark your rig for us!

Good service ishard to come by, glad you guys found some folks who cared and knew what they were doing! Eagerly awaiting your next post, be safe!