(Dayton, OH) –  Today mark's our 1,000th blog. I started on November 5, 2005. I missed a few days at the beginning, but from January 21, 2008 - with Jim as an occasional fill-in - I haven't missed a day.  It’s been fun and it keeps me going. Now that we’re on the road, between the two of us we’ll keep the blogs going, but don’t get upset if we miss an occasional day. There’s going to be times we won’t have internet, we hear it all the time.  Thanks for following along and we’ll do our best to keep you informed on what parks we stay and what we like and don’t like along the way.  We’re excited to be on the road and want to share what we see and experience.

Today we went to the National Museum of the United States Air Force. 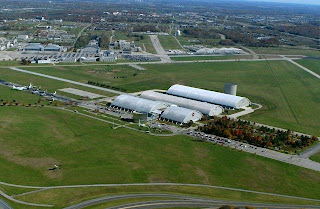 The place is HUGE!  It has three very large hangars plus an attached building tall enough to display about a dozen ICBM missiles upright.  That's just one part of it.  About a mile away is another two large hangers with several presidential aircraft in one, and experimental aircraft in the other. Literally every aircraft and missile that's ever been in the Air Force inventory was there, including the SR-71 spy plane, the X-15, the plane that dropped the atom bomb on Nagasaki, and so many others too numerous to name (or remember).  Especially exciting was seeing (and going aboard) all the planes that served as Air Force One, from Roosevelt's "Sacred Cow" to the Boeing 707 that served Kennedy through Clinton.  It was almost overwhelming.

Here’s just a few examples.  (Double click on them to enlarge them.) 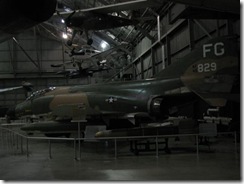 This is Air Force One that flew Kennedy to Dallas the day he was assassinated, and that Lyndon Johnson took the oath of office on.

This is the narrow hallway of Air Force One.  There was glass windows along the hallway you could look through to see the furnishings and equipment.  It was very narrow! 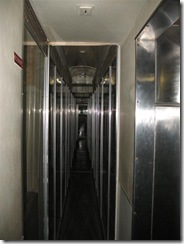 This was an experimental "flying saucer" plane.  It couldn't fly more than three feet above the ground without wobbling, and it never went faster than 35 mph.  Needless to say, it never made it to production. 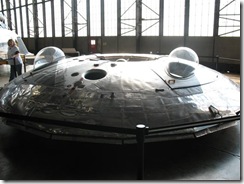 I want this one.  If you double click on it you'll see it has what appears to be a lawn chair for a seat.

While we were at the museum we met up with Sassy and her husband Mike.  The story behind this is Sandra from the of RV-Dreams chat room knew we were in the area where Sassy lives, so she contacted her.  Sassy emailed me that she was in the area and then called me this morning.  We arranged to meet at the museum.  We had met them at the RV-Dreams rally in June. 2008.  It was so great to see them again. They joined us for the visit to the presidential planes exhibit.

Chris (aka “Sassy”) and Mike

We were quite tired by 4:30 so we went back to our place to show them our home. After we talked for a while we decided to go out for Chinese.  This base has a lot of gates, but after 6pm only one is open so it’s a long way around to get anywhere.  When we go out tomorrow we’ll try to be back by 6 so we can come in the gate near our campground.  After a nice dinner and conversation we said our goodbye’s with hugs and went our separate ways.  Thank you Sandra for getting us together, and thank you Chris and Mike for coming over.

Another fun day, and one we won't soon forget!

Glad you met up with Sassy. Sorry I forgot to tell you that I emailed her.

Looks like you had a great day at the Museum.

Better stick to the RV and leave the lawn-chair plane to the museum, lol.

Congratulations on writing all those blogs!

Congrats on the blogging milestone! AWESOME. Nice tour of the aviation museum. You are right, it is huge!

This is one museum that's on my "Bucket List". Thanks for sharing the story and pictures.

did you notice some of the expiamental stuff came from buffalo, n.y.? gguncle