Wrapping it up from Wright-Patterson AFB

(Dayton, OH) – A normal morning.  It was already in the 70’s by the time I got up and by afternoon it was 92.  I think we left Goshen too early. We’re headed east tomorrow, so I doubt if it will be any cooler.
We both did some computer work checking what’s in store for us the next few days.  Jim found an RV park about 30 miles south of Pittsburgh for a couple of nights, then it's on to York, PA for a few days.  There’s a lot of factories in the York area and we hope to see a couple of them.  I’ll report on that later.

The only thing planned for today was a commissary run.  This base is so big and has so many gates that we got turned around trying to find the commissary.  We've counted more than 10 gates to the three different parts of the base.  But at 6pm they all close except for the main gate.  We have a gate about a mile from our campground, but after 6pm if we're coming onto the base we have to drive through the small town of Fairborn all the way around to the main gate and then around the runways, a total of 8 1/2 miles. And this is the only base we've been on where you have to leave the base, then re-enter it to get to the commissary.  I’m glad we never lived here,  but we’ll gladly come back to use the famcamp, it’s really nice.  I took some more pictures of the famcamp area.

This is the lake.  It’s really nice.

This is a small lodge for those who don't have an RV.

This is the office

Each RV site has a permanent table with seats like this on the patio pad. 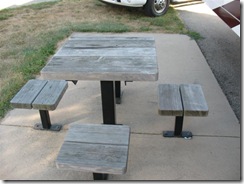 It’s been a great stay, but we’re ready to move on in the morning. See you from Pennsylvania tomorrow night.

when in york,pa. ,agood place for jim is the harley factory.they do have tours there.snyder pretzel factory isnt too far either. there is a lot in that area, my sister used to live in york before moving to ill.

Thanks for the tour of the campgrounds! Travel safe on to PA and hope you find some interesting things to check out.