We Finally Made it to the Lake Michigan Beach

(Chesterton, IN) – It was raining most of the night and early morning.  We didn’t do much all morning while waiting for Rick and Laura to get here.  The rain finally stopped and it started clearing out, so we went for groceries.  I spent more than I wanted, but that’s normal.  At least we have stuff around for next week.

Rick & Laura got here in time for lunch.  We talked awhile then went to the beach.  It was cloudy, but if I would have known the water in the lake was as cool as it was today, we would have come down last week.  The water is very clear, you can go waist  deep and still see the bottom.  The edge of the water is gravel, but about knee high it’s smooth sand.  It was marvelous!  I know we’ll be going down several times next week. It’s nothing like the ocean.  The beach was crowded with people.

Jim, Rick and Laura headed to the beach

Jim and Dee enjoying the sun 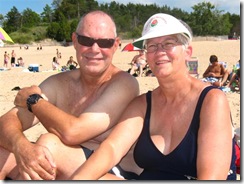 The huge pavilion where they have food and restrooms. 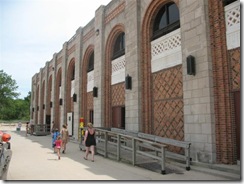 The dune I want to climb next week.

Looking to the East

This sign tells a lot of info. The most important is the top one, the e-coli rating for the day. 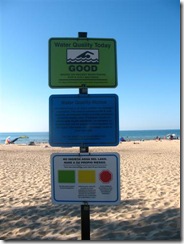 We stayed for about an hour. Once the sun came out it was hot. We’ll go back again next week.
Rick and Laura headed back home early evening.  I went for a walk and found out there’s several roads that go all over the place back into deep woods.  It was just too humid to go far so I’d like to take the car this next week and check out more of the area.


Jim was working on his laptop and it lost the internet connection.  He spilled a cup of coffee several months ago and some of the liquid got into his laptop.  A friend helped him take it apart and dry it out, and it seemed to be working ok at the time, but since then he's had several hardware glitches.  The touch pad stopped working, then the web cam, and now it seems to have lost the internal wireless.  He's pretty frustrated, so we're going to Best Buy tomorrow morning to look at laptops.  After that, we're joining Rick and Laura and going to downtown Chicago to see the air show on the lakefront.  The Blue Angels will be performing.  That will be fun, and should bring back memories of our military days.

I did something similar last year and had the keyboard replaced at a local computer repair place. It was expensive, but not nearly what a new computer costs.

For that reason I'd much rather have a desktop with separate keyboard. They are a lot cheaper to replace!

Looks like a beautiful place to enjoy some fun in the sun! K

Gosh.. if I hopped in our little boat, and floated 4 miles down our river, into the waters of Green Bay, then motored up 50 miles around the tip of Door County, then chugged my way 250 miles south through Lake Michigan, THEN I could join you on the beach!

Watch for me? Might take me till next week to get there....