Fun in the Sun with LOTS of People

(Chesteron, IN) –  We had a busy day planned.  After a late breakfast we left at 11:00 to head to son Rick's.  He drove us to downtown Chicago for the 2010 Chicago Air Show, featuring the U.S. Navy Blue Angels.  We stopped at Culver's for some ice cream, thinking that would hold us over most of the day.
Rick drove to the main show area just north of downtown at the North Street Beach, but it was very crowded and an absolute mess, so we decided to take advantage of his free parking spot at his workplace.  From there we walked less than a mile to Navy Pier Beach.  Even though we were a couple of miles from the main show area we still had a very good view of the show.

First the people... lots of people.  The news said the two days of the show would bring in 2.2 million people to the area.  Here's a couple of pictures of the crowds at North Street Beach, the main show area. 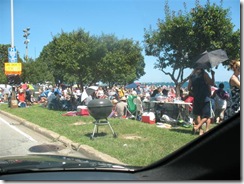 This is a shot taken during our walk to the Navy Pier Beach.

Boats everywhere.  They were parked in the lake for the air show.

Looking from Lake Shore Drive over to Navy Pier. 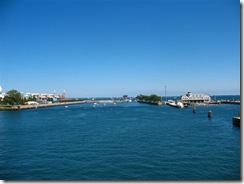 Once we got to the Navy Pier Beach, this was our view.  We sat in the sand waiting for the Blue Angels to arrive and enjoyed some of the other air show acts. 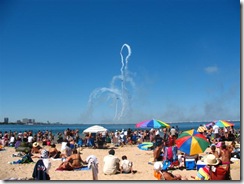 The tents you see in the background are at the main location at North Street Beach where we tried to get to at the beginning. 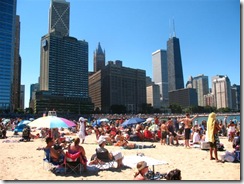 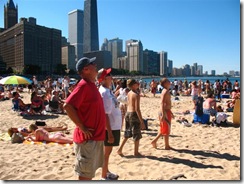 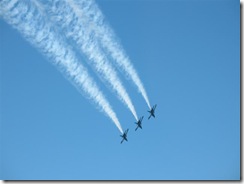 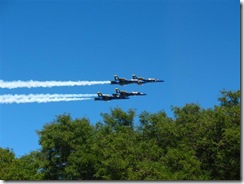 When the show was over we went to Navy Pier.

We’ve been to Navy Pier a few times.  (Including one time in December when it was about 14 degrees below zero with a 30 mph wind.  When we went outside our faces froze!)  Today the weather was much nicer.  :)  We walked to the end and sat for a while and watched the boats coming in from the air show. 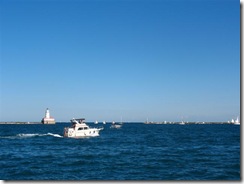 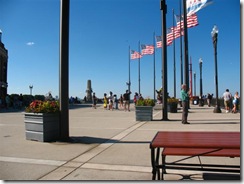 By then we were really hungry so we decided to find a place for dinner. We went to Bubba Gump Shrimp Company.  What a great place to eat!!!  We loved it and it had a great atmosphere.  Forrest Gump was even sitting on a bench in his white suit talking to people, but I forgot to get a picture. We ate outside and enjoyed the perfect weather.

When you need water or something from the waiters/waitresses you flip the sign which says Stop Forrest Stop.  This is the other sign saying no service needed.

It was starting to get late so we worked off some of our dinner by walking back to the car. On the way we passed the WGN Building.  It has stones imbedded on the sides of it from many famous places and structures all over the world. 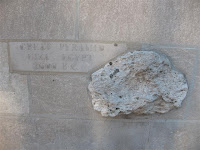 See all the stones sticking out? 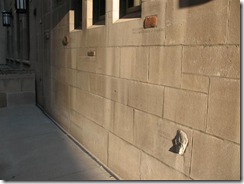 This is a Chicago moose.  It's made of metal, and we don't have any idea what its significance is.  It's just standing there next to a building.  Those of you in Alaska right now have nothing on Chicago. :) 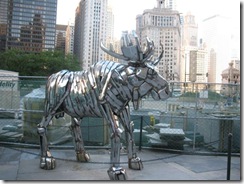 What a fabulous day!  We got home at dusk, so I will leave you with this fabulous picture that Jim took from the beach at our campground.  This is the Chicago skyline 32 miles across the lake. 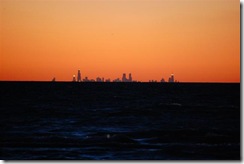 OHHH DEE! That is ONE COOL PARTING SHOT! I love it!

Sure you didn't swipe a picture postcard and snap a shot of it?

I love Chicago but wouldn't want to get in those crowds. Good pictures!

I can't imagine being in the midst of all those people! Better you than me.

Neat moose and some great photos!

Yep, I'm not much on crowds either but that looks like a very nice day. That sunset was a great way to wrap it up.

Great shot of the skyline, Dee! It was never that clear when we were at Indiana dunes! Looks like you had a great day in Chicago!

I just love the Blue Angels. Great shots of them. What a fun day!
Barbara