(Chesterton, IN) - We didn't feel much like doing anything today. We both were sore from all the walking yesterday and our only plans were for dinner with a friend tonight.

Jim's laptop is working again, so we didn't get a new one just yet.  He's thinking about reformatting it later this week.

I read blogs to catch up since it's been a couple days.  I also cleaned the RV a bit since we got some sand in from the weekend.  It's sure not as bad as I thought it would be, we're being very careful.

Lots of campers coming and going.  It's always interesting to see what comes in.  We haven't talked to many people, they have huge family get togethers and we don't want to interfere.   It's been fun to see what they do. There's several tents again today that were put up.  Some can put them up in just minutes and others take a couple hours.  It's neat to watch.

I thought I'd show some more stuff around this park;  Indiana Dunes State Park, on the shore of Lake Michigan in northwestern Indiana.

This is the dump station area. 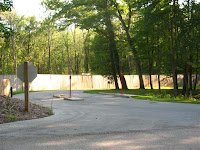 One of the other sections of our campground. 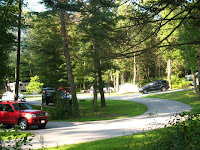 Lots of areas with picnic tables. 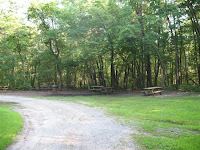 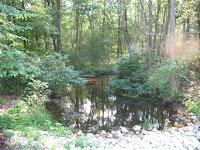 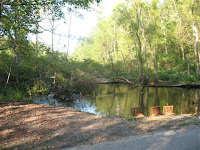 Also several covered picnic shelters.  This place is a lot bigger than we thought it was from the views on Google Earth. 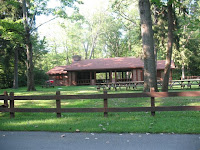 Today there were waves on Lake Michigan.  We strolled down the beach to work out yesterday's soreness. 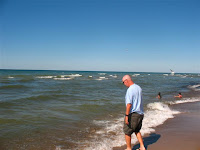 We went to Andrea's house for dinner tonight.  She was the one that visited us with her son Michael a couple weeks ago while we were in Fair Oaks.  She knows how to play the card game Hand and Foot, so we got some lessons from her. Now for those that are going to the Escapees rally we know how to play, kinda.  With a bit more help we'll have it.  Andrea, Jim and Dee. 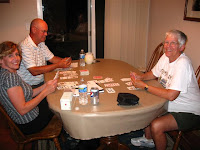 Another day of doing basically not much.  Ain't it great?  :)

It looks like a really nice park, and you are so close to the Lake. Yes, sometimes you have to just stop and take a breather!

I didn't know you went to Shelly's. Hi Shelly! Miss you.

Just started reading your blog. Since we are from Indiana, enjoy reading about it. Stay safe

We had always wanted to go there, but seem to zoom on past each time we head south. Gonna have to make a point to stop there sometime. Thanks!