Appointment on the Other Side of Chicago

(Fair Oaks, IN) -  We got up early this morning and headed out an hour later for the other side of Chicago.

I had made an appointment with a doctor that was recommended at Saturday's family reunion of our daugher-in-law Laura.  Google maps said we needed a little more than two hours to get there, but we gave ourselves three because of traffic. It turned out the traffic wasn't as bad as we thought it would be and we had time to stop at a Steak & Shake for brunch.

On the way there we took the Indiana East-West Toll Road and the Chicago Skyway (I-90), which was nothing but tolls, but at least there was very little traffic. On the way back we took I-94, which avoided the tolls but had much more traffic.  We also had bridges both ways.  I was driving today with Jim as the navigator (he's a LOT better with directions).

This bridge was on the way. 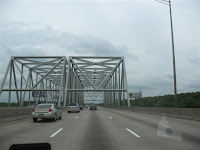 This one was on the way back. 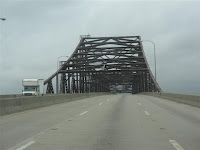 The traffic on the way back. 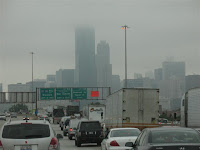 The purpose of our trip was to see a specialist about some knee problems I've been having.  I've been having trouble walking long distances (more than a half mile or so), and my knees aren't working like they use to. I know I'm getting older, but I just knew there was something else wrong.  It turns out one of the main problems I have is my shoes. I had bought walking shoes before going on the road, but they're worn out for one thing, and weren't the proper type of shoes for another.  Walking/running shoes come in three types:  Cushioned, stability, and motion control.  I've been wearing shoes that are cushioned, when I need stability.  He also worked with me on some movements and exercises to give my knees more support and help the muscles.  Afterward we went to a store that the doctor recommended.    I bought a pair of the right type of shoes.  They feel great, and I can't wait to see if they help.

On the way home we stopped  at Walmart and also stopped to look for a geocache near the park.  We didn't find it, but will try again another time.

Good luck with the new shoes...now you can take a hike.

The last time I drove on one of Chicago's toll roads I just kept going straight ahead, figuring I didn't want to take a ramp to the right. I didn't realize at the time that you had to exit right to the toll booth & then right back on, and the straight ahead was for people who bought the pass. Everyone told me I was probably captured on camera, but that sometimes they will let out of state license plates go, I try to not drive anywhere in big cities anymore, although there was a time when I had no problems with Chicago.

That's very interesting about the shoes. I would have thought that the cushioned would have been best. Obviously not!

better to buy new shoes than new knees... hope they are your solution.

Glad you got checked out with the feet and new shoes. Hope they help. If the dogs are barking, it doesn't make for a very good day....

Good to hear it was just the shoes. Have fun with the family.