(Fair Oaks, IN) -  Today was a fun one including a train ride.  Our son invited us to see where he and his wife work in downtown Chicago.  We decided to take the train downtown.  The traffic to the train station was mostly trucks...  we've never seen so many trucks! 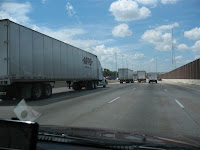 We started our rail journey at Homewood, where our son lives, so he could  drop us off at our car when we got back later this evening.  The Homewood station has service for Amtrack and the Metra line.  We were taking the Metra to the end of the line at Michigan Ave.  The underground hallway of the train station would be unnerving late at night. 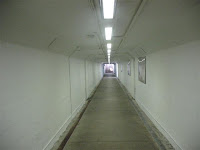 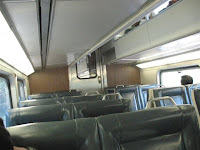 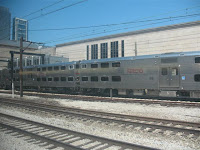 We arrived at Millennium Station on time and our son was there to meet us.  He doesn't even have to leave his building, the train station is in the basement.  His building is the black one in the middle in the photo below.  His wife Laura works in the building next door on he right, and you can go from one building to the other without going outside.  Laura's building is 333 Michigan Ave., and was built in the 1930's.  Its design and architecture is very beautiful, with original woodwork and doors inside.  It's like stepping back in time when you walk through it. 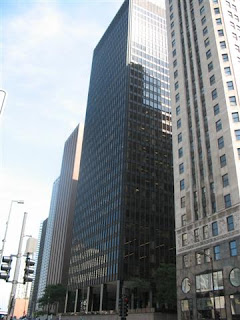 This is the view from our son's office window on the 15th floor, looking down on the Chicago River and out to Lake Michigan. 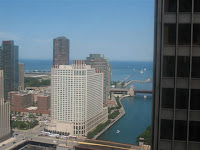 They've been filming the movie "Transformers 3" downtown on Wacker Street, which is the street right below our son's office.  They have set off explosions, dropped skydivers from helicopters, and lots of action off and on for weeks.  Here's a few views of the movie set.

The street is supposed to look like a huge battle scene, so it basically looked like a mess. This was shot from our son's office. 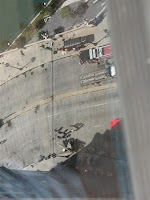 These covered vehicles are some of the "transformers." 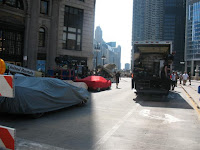 One of the "emergency" vehicles; watch for it in the movie. 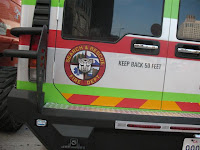 Look at the mess of cars in the background. 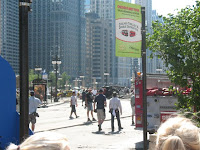 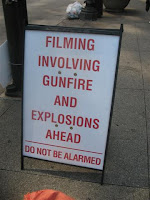 These army vehicles came rumbling down Wacker and arrived at the movie set, including real looking soldiers in uniform on them. 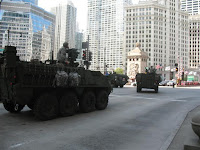 We didn't get to see any actual filming being done.  One of the security guys said they were on a break.  It was pretty cool, though!

We left downtown and went to pick up grandson Jack for the evening.  He lives with his mother about an hour west in Aurora, but sometimes traffic is so bad it takes two hours to get there. We lucked out tonight with light traffic, so we did it in good time.  First we went to dinner.  Each week he chooses between McDonalds and Burger King.  Tonight it was Burger King.  They have a play area, but it was hot and he decided he was too tired to play much. 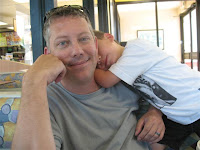 Then we headed for the park. He really enjoys the playground.  We all kicked a soccer ball around and watched him play. 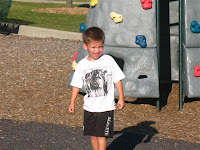 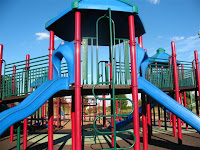 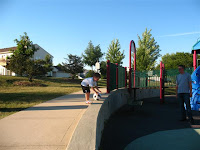 We took Jack home and got back to Homewood and our car about 8:15pm, then another hour home.  What a wonderful day with both son and grandson!

What a day! I know you enjoyed being with the two guys.

I love to see where people work! Looks like a fun day in Chicago!

Beautiful views from the office building!

Glad you got to spend some time with Jack.

I think Chicago has a great transportation system, and it's a lot easier than driving (and parking).

Glad to finally get caught up with you. Our time with the carnival is very busy now that we are in full swing of Fair season.

Loved the pictures of Chicago ~ that is where my Dad was born and I was there once in 1991 and again in 2001. I didn't have much time to tour things so enjoy seeing the pictures of the area.

Glad you had time with Jack. I know how special time is when we get to spend it with our grandchildren.

Looks like fun! My grandma lived in Homewood, so we used to travel from where I lived in DeKalb to visit her.
CC

Oh what a fun adventure ... to take the train into town and do all that sightseeing. Sure beats driving into the downtown!

(catching up on blogs here)