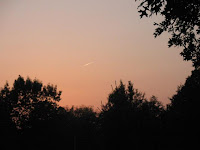 We both have been doing research for a weather radio and with the help of our friends on Facebook we set out to find one. For our use, we want one that's an alert radio that we can program for  our specific area.  We don't need AM or FM, it's going to be used only to wake us up at night for severe weather or tornadoes.

The first place was we went was  Best Buy.  They didn't have any weather radios.  But of course we couldn't leave without buying something.  Jim bought a tiny AM/FM radio for his daily walks.  We had one in our "other" life, but we think it was put in one of the many boxes of stuff we got rid of.  We knew it would eventually happen that we would have to re-buy something we had gotten rid of.  Then we bought a micro SD memory card for my cell phone, which is going to be handy for taking pictures.  Instead of sending pictures from my phone to my PC via email, which costs every time, the photos go onto the card, then I can download them to the computer.  It's for those times I forget my camera and want to take a quick photo.  I picked up a CD wallet to hold the small collection of CDs I keep in my car.  Again, something we had but got rid of.

By then we were getting hungry for lunch. We love Culver's, a new to us restaurant.  Jim loves the hamburgers (they call them Butterburgers... Why?  No idea), and I love the tenderloin.  Across the street is Aldi's, which I like for picking up small grocery items.  I'm glad we ate first.  It's never good to shop for groceries when you're hungry.  Then to Radio Shack for the radio.  They only had a few and the lady said there's been a run on them lately.  Nothing we liked, so guess we'll order it and send it to our son's address.  I'll let you know which one we decided to get.

Our last stop was Sally's.  This is a beauty supply store that used to sell only to salon owners or registered hair stylists.  They now sell to the public.  I bought the #6 guard for our clippers.  I've been cutting Jim's hair (no guard needed for him!) and now he can cut mine. 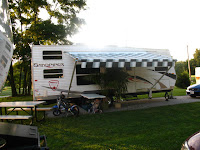 We didn't do much when we got home.  Our neighbors came over to see our home.  They're a young couple living in a very small travel trailer for 2-3 months while having a house built.  They're a great couple with two kids, a large dog, a cat, and a fish aquarium.  I can't believe they're living in such a tiny trailer, but they seem to be doing well and love it.  They also know they're going to a bigger house before long.  He's active duty and will be here at least four years.


I spent the rest of the day on Facebook reading what everyone is doing, while Jim did laundry. We both  walked today, so we're getting out a bit more with the lower humidity.  Tomorrow we'll have the kids.

Please let us know which you decide to get and some of your favorite reasons. We too are shopping/researching for purchasing a weather radio without it costing too much...around $100 is our budget.

We read about one that we think has GPS because it finds your spot and only gives warning for your current area.

I would love to have a weather radio that will warn you way in advance that a tsunami is headed for the Central California Coast. Are those radios good for that?

We purchased a weather radio at Walgreens when we started fulltiming in May. It was $30 and has worked great. You can program only the counties around you so you don't get the alerts for the entire state. It can save the counties if it is a place you plan to go to again. It has gone off several times since we've had it. Luckily, the weather never got too severe. It was a great investment.
Our son used to work at Culver's years ago when he was in high school. What a temptation :)
The buns of the burgers are slathered with butter inside and out. Thus the name. No wonder they're so good!

I think they call them butter burgers because the put a pat of butter on top of the meat as it fries. We used to have one in Milwaukee and they were the BEST burgers I had ever eaten. But Who needs an extra pat of fat!

I figure it is OK to rebuy something you got rid of because then you really know you need it.

Dontcha hate it when ya see the total on the register at the checkout? Especially when you weren't going to buy ANYTHING to begin with?