Car has been Fixed (O'Fallon, IL)

It was close to midnight when we went to bed last night, and within minutes after we laid down a hard rainstorm went through the area.  The rain sounded like hail on the bathroom skylight.  It was at least an hour when it let up enough that it became a light rain and lured us to sleep.


My car was to be worked on today so Jim called to tell the guy what we needed.  He called us back a couple hours later and said the brakes are only 50% worn, so no problem there.  The check engine light was caused by a vacuum hose that had to be replaced.  The light was reset and now we're good to go.  When we get back here next month we're thinking of having the timing belt replaced, since it's supposed to be replaced at 90,000 miles.  (We're currently at 86,000 miles.)  It will also be due for an oil change by that time.

We're still very thankful to have the car and not have to use the truck for local travel.  It's a lot cheaper since we're getting 24 mpg in town, compared to 16 or 17 mpg in the truck.

I decided to take some pictures today since it's been a few days.  Since we don't have a sewer hookup at our site we shower at the bathhouse.  It's a little different than we've seen before.  I thought I'd take a picture and show you.  You know, pictures tell it all.

The shower is push button that last about 3 minutes.  No way to adjust the temperature, it's either warm or real hot.  Sometimes it's so hot you can't get fully under it. Luckily, that hasn't happened very often. 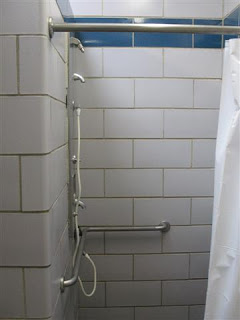 No words for this one except, notice the magazines.  Nice touch. Also, notice the metal seat.  NOT a nice touch!  :) 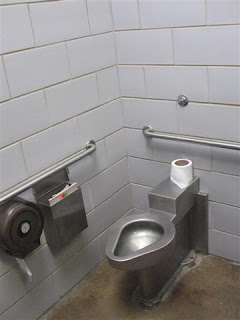 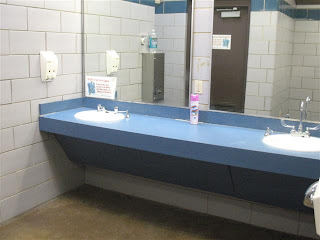 We had to get out today, so inbetween the rain showers after we picked up the car we went to Barnes & Noble. Jim uses a Kindle for his reading, so he hasn't been in a bookstore in quite a while.  He wanted a magazine he couldn't find on base.  It was also a good test for the new tires since we went on highway I-64 to get there.  They feel great, no howling and no more pulling a bit to the right.

When we got back home I chatted with mom awhile then ate supper and just read blogs or in chat the rest of the evening.  Tomorrow will be busier, stay tuned.

That shower must have been imported from Europe!

That stool looks like it was imported from some prison!

Ewwww no thanks on using that toilet!

I would rather use our own bathroom and move the rig every 10 days or so to dump.

One could borrow someone's
Blue Boy to dump the tanks, or pay a company to come with a pumper truck (Steve's folks did that at a long term lot in a park, not too expensive)

At a county park we know of, one guy has a portable pumping device installed on his pickup truck. He goes around to all the seasonal campers each week or so and dumps their tanks for a fee. He does quite well as an added income and all the folks really like him. He just pumps at their site and brings it over to the dump station and empties out there.

Anything I guess to not have to use that stainless steel toilet!

(looks like the kind they have in a prison?)