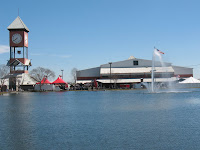 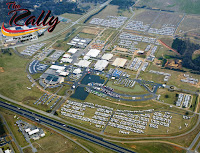 Lake & Tower center of the Rally. View from air on Friday, more rigs arrived on Saturday

We got up a little later today, . At least the sun was up, the skies were blue and just a little windy instead of strong winds. Temp was 41 to start the day. We got to the rally about . People were setting up but the RV’s were open. We checked out a couple of the 5ers then went to our first seminar for the day at . This one was on RV boot camp. The topic was how to care for tires, black water tanks, grey water and little things that can happen to an RV while on the road. We picked up on a lot of little things and the audience was as good as the instructor. Well worth the time. 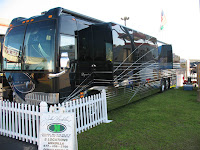 a bite to eat, we roamed the whole area checking out Prevost MH and some of the higher end Motor homes. We found one or two that would be livable but the price was on the high side of $1.239 million and 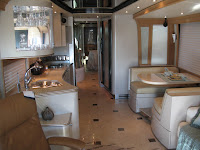 $1. 359mil. One was $747,000 which was a preowned 2005. What was cool, the main floor opened up and kids could go under the rig and play. A nice setup with videos and tv were laid out for them. We talked to a couple sales people but the most fun was talking to people that already had a rig. One man was so good at details that the salesman just gave up and let him talk. He was very good and had quite a few people listening to him.

At we went to our 2nd seminar of today. This was on fulltiming, snowbirding and part-timers. It was with the same couple that did the seminar yesterday so a bunch of it was repeated but again we learned more from the audience. In yesterdays seminars and todays, we talked to people that have been on the road and how they do things, what they have. Today was quite interesting. We talked to a woman that’s traveling alone and has been on the road 9 years with no intention of quitting. She was fascinating to listen to some of the things she’s been through.

We went to the main three RV’s that are quite interesting to us. While sitting in one of them, we met a really nice couple that has a 33’ Excel. We went to their place and they told us a lot about being on the road part-time. They own a retirement place and can’t sell or give it up so they travel 3-5 months out of the year. They’re rig was 2006 and laid out quite nice.

The evening entertainment was Ricky Skaggs. He was a county western singer then went to . What a great time! The place was huge and it was almost full. I’ve never seen so many “people our age” in one place and it was a blast. He played for one hour. There were long lines at the open concessions stands. It looked like the ice cream stand won with the longer lines. Trams were everywhere to take people to their rigs.

I will continue the next couple blogs with ideas and what we’re thinking, a more details as I think of them. I need to think through all we’ve taken in and get our three bags of info all sorted out. Stay tuned.

wow "high end" motor homes... our idea of a motor home in this country is piling into a 1960s Dormabile... remember those!!?