In case you haven't been following  our blog, my hubby, Jim, has Glioblastoma stage 4 cancer. I'm writing in detail for those that have the same cancer what we're going thru. It all started May 23, 2021 if you want to look back to previous blogs.

I want to thank Heartland Hospice for all their help and concern during the last three months. We have had nothing but praise for all the workers. The nurses were there when needed and the CNA was so good with Jim with his baths and turning him to change the bed sheets. Thank you from the bottom of my heart.

The Labor Day weekend was great! My sister came over to be with me all weekend. It gave me a break.  We didn't do anything special except sit outside. It was gorgeous weather.

There's usually ducks roaming around and they came right up to us. We were eating dinner outside and they thought they could get some, nope, ducks don't eat rice. 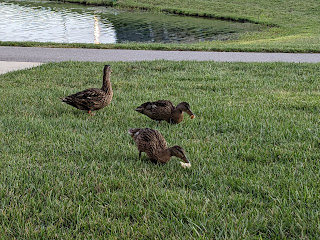 This is the view across the pond from the apartment. 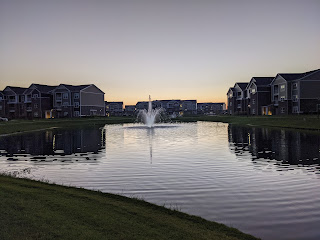 This is our apartment building. The first portion on the left. 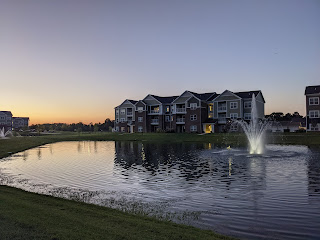 It was so pretty with the fountains and dusk.
If you want to know details about the next step in death, please read details. If not skip, this part and go on to the next line. I want this for future reference, but it can help others too.
_________________________________________________________________
Jim was real restless over the weekend. He was breathing and gasping for air, so I put him on the oxygen I had on hand. The nurse came in on Sunday for a check. He told us what to except over the following couple days. He got very detailed, telling about fast breathing and erratic heart beat. We had to watch him closely, he was grabbing at blankets and trying to throw a leg over the side of the bed to get up. He was too weak to get up, but his weight might have rolled him over and go on the floor. I never left his side and both sis and I talked to him. He started staring into space without realizing we were there. Sis left on Monday afternoon. Our son decided to come on Tuesday afternoon. He came the same time the nurse was there. She told us to increase the morphine because all the movement and restlessness was showing he was in pain. That's the last thing I wanted, so we increased to 5ml every four hours. He normally moaned loudly if you moved his right side leg or arm, but with the morphine he didn't so she was right about him being in pain. I'm so glad for her knowledge. I gave him the last dose at midnight. I went to sleep then I heard a big gasp, like someone blowing out candles on a cake with a harsh breath. It was so loud that Rick heard it in the living room. I knew it was his last breath. I couldn't move. It took me awhile to actually get up and check. He was gone I got Rick up and have him check for life, we then called Frank our other son. We sat with him for awhile then called hospice. They had others that had died so it took a couple hours for them to get here. They called the funeral home and they said the same thing, they had several deaths so it was another couple hours. The time he died was 1:30am, the time the nurse checked it was 4:30am which is what will be on the death certificate. He was picked up and taken by 6:40. All of us went back to bed to get a little sleep. We each got a couple hours then up and called the people that were picking up the supplies, hospital bed, oxygen tank and air supply. It was about 3:00pm we had everything out. The kids took everything out that was Jim's from the closet and personal items and was packed and ready for a garage sale or thrift store.
OBIT
https://www.dignitymemorial.com/obituaries/fairview-heights-il/james-walter-10341992
_________________________________________________________________
My life has  been turned upside down. I know millions of other women are or were in the same boat. I know I'll be ok. One thing good, at the apartment there's no "good" memories. All it's been is a care giving place. It's easier to start a new chapter of my life. The kids did a good job in moving furniture and getting rid of a lift chair that I didn't want. I have a big table up for puzzles. The bedroom has been changed. It's setup for me and it's homey. I'll have to learn to cook for one person or make meals for two and put in the freezer the extra. I did go grocery shopping and that was really rough, I didn't buy anything that Jim would be eating. The income will be cut in half, so that's another aspect of living a different life style. 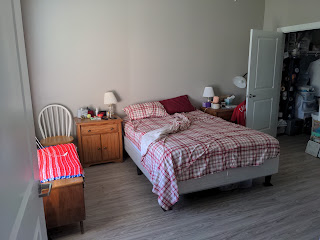 New rug in front of the TV. 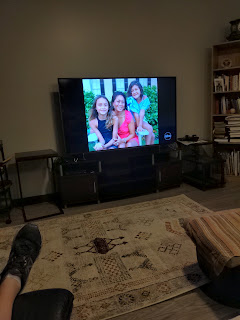 Doris, a neighbor  Sandy, and I went to Hannibal today. The weather was perfect so we took advantage of it.
We went to a quilt store, then the General Store with all kinds of candy, and our favorite the Indian store. I bought a couple Indian pictures for the living room.
Quilt store. It was loaded with all kinds of material. 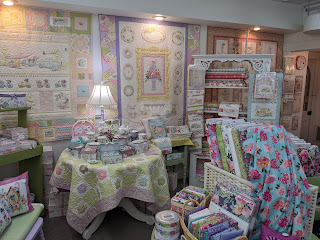 Looking down the street toward Mark Twain Hotel 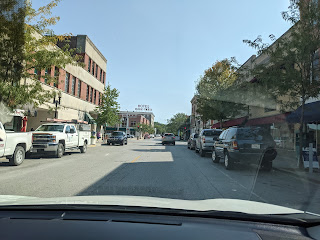 Down on the Mississippi. 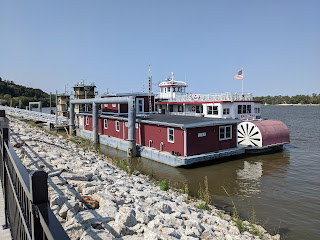 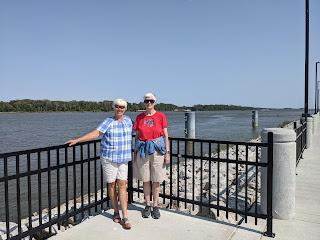 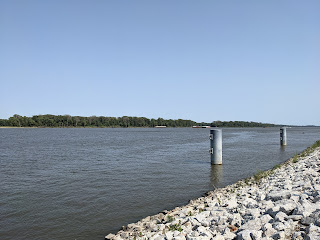 We came back to the house and watched TV, I was in chat and also did a zoom with the North Carolina group. I'll continue the blogs, at least awhile.

Glad you will continue blogging. It's almost like keeping a diary. Also therapeutic.

The thought occurs to me that your time working with hospice in Florida was a blessing. A way to guide you along in this journey.

We were so sorry when we heard Jim had died. He's in no pain now which is of some comfort. Isn't hospice wonderful? I remember when my Dad died them coming within a few hours to take his medical supplies and extra meds. They were so nice.
I hope you will find comfort in your friends and family as well as memories.

We are so sorry and know life has changed dramatically...can't imagine. You were a blessing to Jim...he had the best of care. Now, it is time to take care of you. One step at a time!!!

We grieve with thee

Dee, so very sorry for your loss of Jim.

You're right about the adjustments but knowing doesn't make it easy. The love you shared was a gift to each other. He took yours with him but left his love for you to cherish.

I have been following your experience via your blog. I am so terribly sorry for the loss of your husband. You are so incredibly strong, I marvel at your strength. Don't know if I would have that strength. Again, I am so very sorry.

I am so sorry. Please accept our condolences and know that are prayers are with you Dee. Our hearts go out to you. We greatly admire how you handled the months of Jim’s decline and final days. Your openness and sharing has been a great help to me personally, and to Pam, as we wonder what that our final days here on this earth may be like. I hope your story of insight and strength and courage and help to Jim gets told many times. “Thank you for sharing” seems like over used and unsatisfactory words at a time like this. If I could think of other words I would say so. Bless you Dee.

Sending you hugs and love as you make this transition in life. I'm happy that Jim is no longer suffering and pray you will soon have nothing but wonderful memories. Continue to live life just like you are. And please do blog occasionally so we know how you are.

We are so sorry for your loss Dee. Our condolences to you and your family. I am glad that you have family and friends near by for support.

Dee, you are in Karen and my thoughts. Thank you for letting us know what has been going on with Jim. Mark from Missouri

You were wonderful with him right to the end,may God comfort you today and going forward.-Mary

So sorry Dee for your loss. You did the best anybody could do. Glad your near family. Our deepest condolences.
Eileen and Tony

I am so sorry for your loss. Even though you know it's coming, it is still very hard. My husband was in an acute hospice facility and he kept throwing off all his covers before he died. I don't know how he did it because he never moved otherwise. I would doze off and, when I woke up, he would be uncovered. I thank God for the hospice he was in.

God bless you and be with you. Ann M

Dee....I am so sorry to hear about Jim, he was a wonderful person and an inspiration to so many. I will keep you in my thoughts and prayers as you start this next chapter of your life.

Thinking of you as you celebrate Jim's beautiful life. He will always live on in your heart. Our deepest condolences.

My condolences on Jim’s passing. I completely understand the need for having all the medical equipment gone as soon as possible. When my Dad passed we wanted to get my Mom comfortable in her house again so we had all equipment and supplies gone as soon as we could. It made it a little easier.

Dee, I just learned of Jim's passing. I am so sorry for your loss. My prayers continue for you and the family. Hugs

So sorry for your loss. Stay strong and continue on. If you need help with your feelings there are groups for that. You are in our prayers.