I never say anything about politics, but to keep history in our lives and maybe readers in the future who may read this blog (including grandkids and great grandkids) I'm putting in this topic today. I'll not elaborate, you can always look it up. This week during the congressional approval for the new President elect Joe Biden, there was a "protest" about Donald Trump not having the votes to win. There was a riot with people killed and several in the hospital. They broke windows to get into the Capitol building with items taken and destroying rooms. There's been talk of removing the President before his time ends on January 20. The week was all about the riots/protesting.

I crocheted all week getting orders done. It keeps me busy and out of the public. The Covid19 is still climbing since Christmas get togethers. The vaccine is still being administered, but slowly. There's two shots to be given at least 18 days apart. There's lines waiting for hours to get the shot. Not all counties have it. Just another thing happening for this time in history. We're still not doing or going anywhere we don't have to go.

I had another dentist appointment for another root canal, this time on the lower right. The upper tooth above it still is hurting since April last year. The dentist thinks there's a connection between the two teeth. It took an hour and half to get the dying roots out, which were three again not two. I don't have a normal body or teeth.

The lake and canal have been very active. 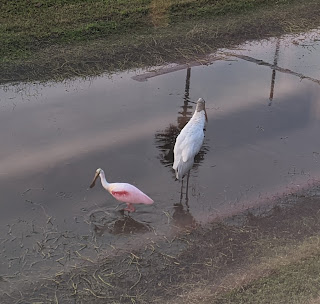 Our resident alligator. Birds get right next to him and he doesn't care. 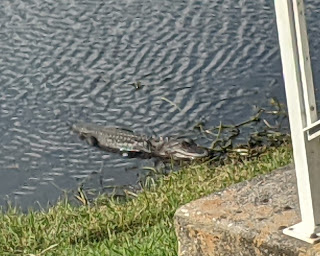 When I took this picture I was sure the above alligator would attack, but didn't. 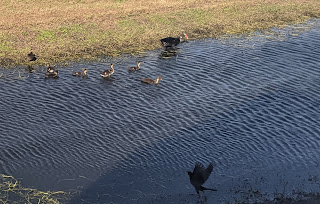 And the best sunset of the week. I'm working on a new website for the crochet items. I love making orders and fun to see how much I can do with animals. Everyone has a special animal that's near and dear to them. If you do and want a small token of one, let me know, I'll try to make it.