Zoom has been our stable connection quite a few times this week. We did a zoom for rent negotiations and three of us got together to talk with the community owners. It's handy and less travel time for everyone concerned. Another zoom meeting with North Carolina friends was on Friday. Staying in touch is so important and also doing business has been great.

We had hurricane Eta come our way after being in the Caribbean for several days. It was a Cat 1 by the time it got to the west coast of Florida. Tampa and St. Petersburg was hit with a lot of rain and wind damage was mainly from storm surge in the bay. We didn't get anything but bands of rain and wind was no more then 30mph. It was like a normal summer storm. We were suppose to go to Tampa for a Veterans Day meal but changed it to Thursday night instead. We were suppose to go to Texas de Brazil restaurant in March for our 50th wedding anniversary, but they closed it because of Covid. The vets got a 25% discount so it was good to take advantage of the discount and also get free dessert for our anniversary. 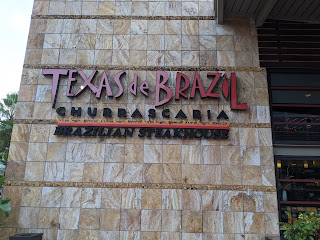 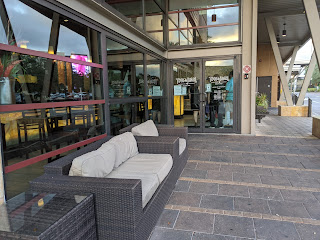 They bring a skewer of meat to the table and slice off as much as you want of different meat varieties. The waiter and Jim. 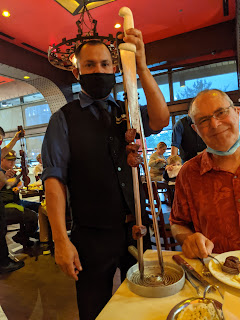 I didn't participate in the meats, but the salad bar with different kinds of veggies I've never had was my meal. The cheeses were also very good and a variety. 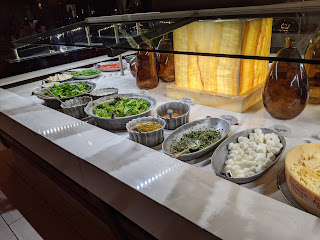 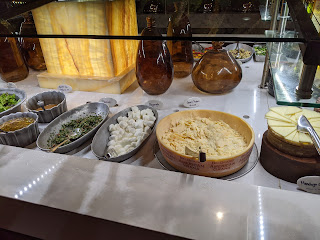 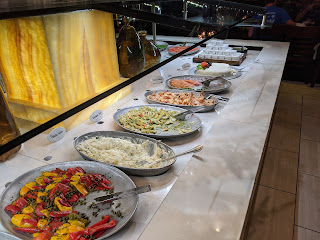 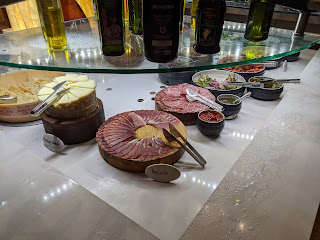 We were both quite satisfied and maybe make the restaurant a yearly place to eat.
I put together the puzzle I started last month. I've been crocheting more then working on the puzzle. It's a pretty one and loaned from a neighbor so it goes back to her. 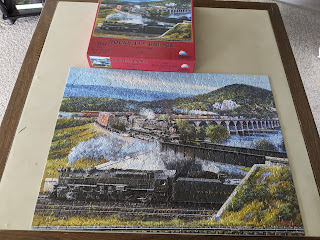 Our son, Rick, bought a drumset. He played drums since he was very young all through school and college. It's so good to see him behind a set. This one won't bother the neighbors. It's all electronic. He's doing a great job and it's like he never missed a beat with so much time away from them. Good job Rick. If you want to hear click here 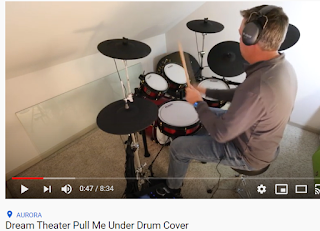 We've heard something under the house the past couple days. It's big, not just a rat. I heard it Saturday morning before getting up so went outside to check it out. It's a small squirrel. That's not good, they love chewing on wires. We'll call the pest control on Monday.
We met with our friends, Lessie and Ed,  for lunch at Strawberry Hut in Plant City. They're leaving Florida before long and we wanted to see them before they take off. Lessie had some puzzles she picked up from a thrift store so I needed to get them, that will give me even more to do through the winter months in solitude from Covid. The Hut is about half way for both of us and the sandwiches are great. 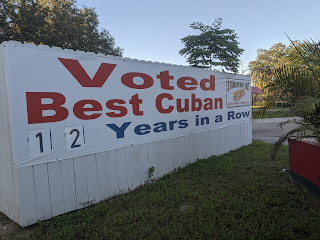 Lessie and Ed, thank you for meeting up with us. What a great day! 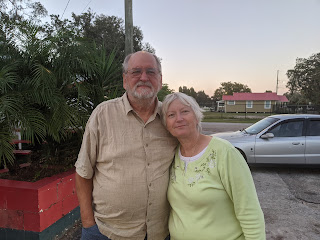 It's another week. Jim had dentist and his physical. Old age is creeping in, but nothing beyond a tooth being filled and the blood work was almost perfect. He's good to go for another year.

Sounds like you've found someplace new to eat at.
Hoping this Covid ends soon.
Good job on the puzzle.
Be Safe and Enjoy!

We got a new resident in the house yesterday too. Moves fast between furniture. We will be calling our pest control company.

Curious about the vegetables on the salad bar that you never had before.